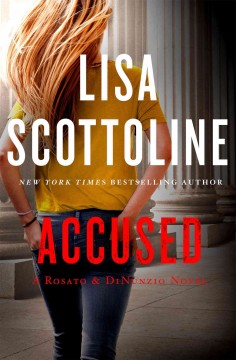 This summer, the Wednesday Morning Book Group discussed Accused, by our recent guest speaker, Lisa Scottoline. Almost everyone in the group enjoyed the book, calling it “fun” and “light”, even as it touched on some serious themes. We like main character Mary DiNunzio, and were glad to see justice served in the end.

It was easy to feel affection for feisty lawyer Mary DiNunzio, and get involved in her life. One reader mentioned that her Italian family was just like Mary’s, even as other readers wondered at the depth of family involvement. Mary is passionate about her cases, which makes her work hard, but we did worry a little that her emotions occasionally clouded her judgment. Her strong-willed tenacity at work did not carry over into her personal life and we felt she should have been able to stand up to her mother and mother-in-law, and behave more maturely in her relationship to fiancé Anthony.

We found the character of Allegra, the 13-year-old genius and instigator of the review of Lonnie Stall’s case, to be sympathetic. While one reader wondered why the firm would take a young teenager seriously, most felt it was right that Rosato & Associates took the case. Allegra was smart and determined, and she had the means to pay for their services, which we agreed was an important factor. We didn’t think Mary would have taken the case (at least not initially) without being sure of getting paid.

Allegra was a complicated character, and although we supported her in her cause, there were times in the story when we doubted her memory and ability to see the case clearly. She was very emotional, which allowed her to connect strongly to Mary (too strongly, in fact) and besides her legal case, she desperately needed the love and support of an adult, since her parents were distant. Mary fell into that role easily, and we were concerned that it might blind her to the facts of the case, especially when a few of us began to suspect that Allegra had committed the crime herself.

All agreed that Lonnie Stall was treated unfairly by the justice system. The police immediately focused on him (the circumstantial evidence certainly pointed that way) and never investigated any other possible suspects. The fact that he was a young black man, and one of the employees, didn’t help his case. Worst of all, he changed his plea to guilty before the end of his trial, so why would anyone doubt that the right man had been convicted? We found it hard to believe that Lonnie didn’t reveal his reasons for doing so, which could have led to reopening his case, especially when he knew Mary was looking into it.

As the story developed, there were a few things that seemed a bit far-fetched – a coincidence here, a perceptive leap of logic there – but they didn’t affect our overall enjoyment of the story. Some readers shared what they liked about other Rosato & Associates titles, and several members of the group were eager to read another one in the series, especially the new one, Damaged, since it again features Mary as the main character.