This graphic novel chronicles the career of designer Christian Dior for the last ten years of his life. Brightly colored drawings accompany a biographical history of the famed designer. The dress designs are very Grace Kelley or Audrey Hepburn and pay a beautiful a tribute to a man ahead of his time. Even if you are not a graphic novel fan, this book is fun just to look through for the illustrations.

Click here to link to our catalog and check it out! 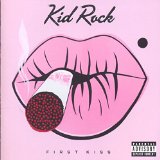 I have to admit, I am a huge fan of Kid Rock.  There.  I said it.  I saw him as an opening act for Kiss and never looked back.  His latest CD, First Kiss differs a bit from his usual raunchy lyrics and hard rock sound and instead opts for more reflective lyrics and bluesy rock and roll.  The title track, “First Kiss,” kicks off the CD with lyrics reminiscent of “All Summer Long” from Rock and Roll Jesus. There was not a single song that I didn’t like on this CD.  That’s quite a feat as far as I’m concerned.   One of my favorite songs was “Drinking Beer with Dad,” reminding me of summers long ago when I did just that.

Reflect  back on your carefree, misspent youth with this CD.  Kid Rock is aging like a fine whiskey, smooth and satisfying.

A decade after she left Haven Harbor, Maine, Angie Curtis returns after receiving news that the remains of her mother have been found.  Raised by her grandmother, Charlotte, since the disappearance of her mother, Angie believed she was abandoned.  Now there is evidence not only that her mother was murdered, but that Angie knows the killer. When a member of Charlotte’s needlepointing business dies under mysterious circumstances, it starts to look like the two murders may be connected.

I love cozy mysteries.  They are perfect for a snowy day spent reading with a cup of tea and my lap cat.  Stay warm! 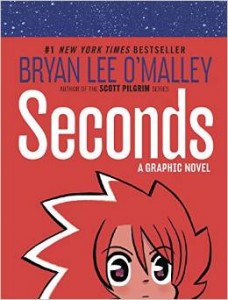 Ok, I’ve been on a binge of graphic novels this past month. But, that’s because there are so MANY that are SO GOOD!! This one has to be my reigning favorite (outside of the Marvel and DC Universes that is). It tells the story of a rather prickly restaurant owner and chef, Katie. The restaurant, Seconds, is doing a brisk business and Katie wants to open an additional restaurant across town.  The location is in a less desirable area but the building has historic charm.  Life is good.

After a series of mishaps and accidents at the restaurant, her life is starting to seem not so good. One night after work, she falls asleep wishing she could reverse all the bad that has happened.  Waking in the night she finds a mysterious girl crouching on her dresser. (Stay with me here) As the girl slowly disappears from view, Katie finds a small notebook and a red mushroom left behind.

Within the notebook is a recipe for a do-over, a second chance to make things right. All Katie has to do is write down her mistake in the notebook, eat the mushroom, and things will go back to the way they were. Katie, a type-A personality, cannot be happy with making things the way they were however.  She succeeds in finding the source of the red mushrooms and begins redoing her entire life over and over to disastrous results.

With chibi-like characters, bright coloration, and unusual framing for a comic, it is a delight to the eyes yet remains a cautionary tale. How many second chances can you have without your life becoming unrecognizable as your own? The answer lies within.

This book has been on my nightstand for a long time and I finally had the time to read it. Stitched into a series of vignettes, the story follows the life of a 500 year-old illuminated Haggadah. Hanna Heath, a book conservator tasked with the job of ensuring the stability of the book, travels from her home in Australia to Sarajevo, Bosnia where the book is under heavy guard. Upon taking the book apart to restitch and fix small holes in the binding and seams, she finds evidence of where the book has been throughout its 500-year history. The story alternates between the present (in this case 1996) and the past. The story of the Haggadah is told in reverse chronology – moving steadily backwards, ending with the creation of the drawings that become the Haggadah.

Not only a story of a book as the title would suggest, but in many ways a history of the Jewish struggle to exist in a world that found reason after reason to make that as difficult as possible. For a student of history as I am, I found more questions than answers that have led me onto more history books about the history of the Jewish people.

If you have never seen an illuminated Haggadah take a look. They are absolutely gorgeous. I had no idea until now that they existed.

Bottom line: I am told that it is a tough book to read because of the alternating plot lines. I didn’t have the same sensation perhaps because I listened to it. Try it and see and then come join us at the main library on February 6th, 2015 at Noon to discuss.

NB:  I checked this book out of the Chelmsford Public Library.  I received no compensation from this review. 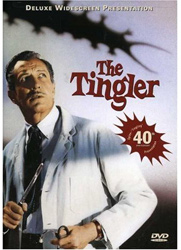 As part of our ongoing migration from videocassette to DVD, we recently acquired a slew (slain?) of classic horror films, just in time for all your Halloween needs. These run the gamut from Vincent Price classics like The Abominable Dr. Phibes, The Tingler and Witchfinder General (better known in the United States as The Conqueror Worm) to early 1970’s faves like Sssssss starring Strother Martin and the made-for-television The Night Stalker, starring Darren McGavin.

Here are the other titles we just received:

Dracula Has Risen From the Grave
Horror of Dracula
These are a couple of Hammer films, starring Christopher Lee as Dracula, that epitomize the heyday of 1960’s British horror.

Burnt Offerings
The Legend of Hell House
Village of the Damned
A trio of intelligent dread-provoking thrillers starring Oliver Reed, Roddy McDowall, and George Sanders, respectively. And let’s hear it for Karen Black!

Carnival of Souls
The edition we have is from the Criterion Collection, so it contains both the original theatrical version and the extended director’s cut, as well as many extras and commentaries.

Stephen King’s It
A mini-series from 1990 of King’s book, it won an Emmy. It has a scary clown…need I say more?

For some fun related reading, check out Television Horror Movie Hosts. Those of you who remember Kaiser Broadcasting on channel 56 in Boston, might also remember the Ghoul, who merits a chapter in the book.

Here are some more horror film books in our collection:

If you had the opportunity to see The Skatalites play at this year’s Lowell Folk Festival, then you know that ska is great, upbeat party music. The library has an excellent collection of ska, and we’ve just expanded our offerings with the following titles (record labels are in parentheses):

Blazing Horns / Tenor in Roots by Tommy McCook (Blood & Fire Limited)
Saxophonist Tommy McCook, who died in 1998, was one of the founders of the Skatalites. This disc actually combines two LP’s from different periods in McCook’s career. He is backed up by the famous session duo of Sly Dunbar and Robbie Shakespeare on many of the tracks.

Alpha Boys’ School: Music in Education (Trojan)
An interesting compilation of tracks by musicians who attended the school in Kingston, Jamaica, including Don Drummond, Lester Sterling (who is still in the present incarnation of The Skatalites), Rico Rodriguez, and Tommy McCook. The first few cuts are mainstream jazz, while the majority of the selections are ska. 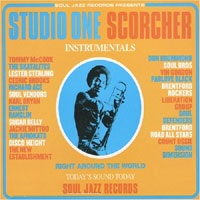 Studio One Scorcher (Soul Jazz)
Downbeat the Ruler: Killer Instrumentals from Studio One (Heartbeat)
Two very good compilations of ska and reggae. The sound quality on Downbeat the Ruler is surprisingly clean. Be sure to tie down your sub-woofers; the bass is thundering.

Trojan Rude Boy Box Set (Trojan)
Trojan Skinhead Reggae Box Set (Trojan)
More of the inexpensive 3-disc compilations that Trojan is famous for. Rude boy and skinhead reggae were offshoots of ska. Rude boy is considered a form of rocksteady, while skinhead reggae, as its name implies, grew out of the British working-class sometime between the Mods (think Quadrophenia) and punk. The late 70’s saw a revival of sorts with the British bands, Madness, The Selecter, and The Specials. Nowadays, most of us think of skinheads as right-wing xenophobes, but that isn’t always the case. See Wikipedia’s entry on skinheads for more information.

For more ska and rocksteady, try these discs:

Do you need suggestions for good books to read? We have lists of books for each grade. We even have the lists separated into genres.

Some books are easy to read and some are more difficult, so take a look at several of the lists to get ideas.