With these crisp fall days leading into more frigid temperatures we had several book picks at our LIVE Friday Fiction book group in October  that are long-listed and/or finalists for awards.

In addition Jessica  gave an overview of our REACT Grant:  Read, Engage, And Come Together work this coming year.  November and December will focus on the topic of Poverty and Food Insecurity.  Several of our book picks last month also engage the issues that will be explored with our REACT Grant:

Our best wishes for moments of peace and gratitude during the upcoming autumnal holiday season.

If John Muir was the father of the conservation movement in our country, who was the mother of the environmental and sustainability movement?

Here are a few hints:

If you would like to learn more about Rachel Carson, please join us for the next Moveable Feast Book Group at Tequila’s Grill & Cantina, in North Chelmsford, on Saturday, May 12, 2018.

If you do not have time to read the book, consider watching the PBS documentary American Experience: Rachel Carson, and joining us for our discussion.  Here’s the beginning of the documentary to pique your interest!

“The stars don’t look bigger, but they do look brighter.”  –Sally Ride

News reporter Lynn Sherr became friends with Sally Ride during her years of coverage of NASA and the space program.  This friendship continued for thirty years.  Her biography Sally Ride: America’s First Woman in Space will be our next Moveable Feast book group selection at Nobo Restaurant (18 Boston Road) in Chelmsford on Saturday, March 17th from 2pm – 4pm.

In a short video from Biography.com (Hi5tory in Five), Lynn Sherr shares five facts about Sally:

Please consider joining us at Nobo Restaurant to continue our discussion of Sally’s biography, and to enjoy the restaurant’s relaxing dining room.  For any additional questions email Lisa at: lfrancine@chelmsfordlibrary.org

Our next book The Glass Universe: How the Ladies of the Harvard Observatory Took the Measure of the Stars by Dava Sobel  will be on Saturday April 12th with our location still to be determined. 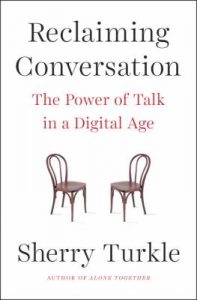 How attached are you to your smartphone?  Have you noticed that your face-to-face conversations have been curtailed or diminished with the advent of this robust technology? Or do you espouse that your smartphone has enabled you to better keep up with your friends and family?

Join us on Saturday, February 3, 2018 from 2pm to 4pm at The Java Room (14 Littleton Road, Chelmsford, Ma.) for our next Moveable Feast book discussion of  Sherry Turkle’s Reclaiming Conversation: The Power of Talk in a Digital Age.  Turkle, an MIT professor, clinical psychologist, and sociologist has been studying the effects of technology on our relationships for over 30 years.  Her 2012 TED Talk, “Connected, but alone” has been viewed 4.2 million times, and was related to her previous book Alone Together: Why We Expect More From Technology and Less From Each Other.  To borrow a copy of Reclaiming Conversation ask a staff member at our Circulation Desk.  See you soon for a vibrant discussion! 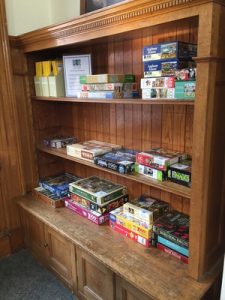 Are you looking for something to do with family or friends this holiday season, and beyond? Do you need a little alone time to recharge your batteries during this busy time of year? Well, consider swinging by the library for a free puzzle!

Our new Puzzle Swap collection is located in the Fireplace Room in the built in bookcase to the right of the fireplace. We envision the collection growing over time, and would ask you to consider donating to the collection if you are able, or so inclined. 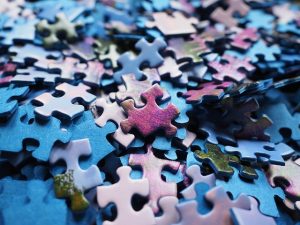 Here are the guidelines for borrowing or donating puzzles.

From the entire staff at Chelmsford Public Library, wishes, to you and your family, for a joyous and relaxing holiday season! 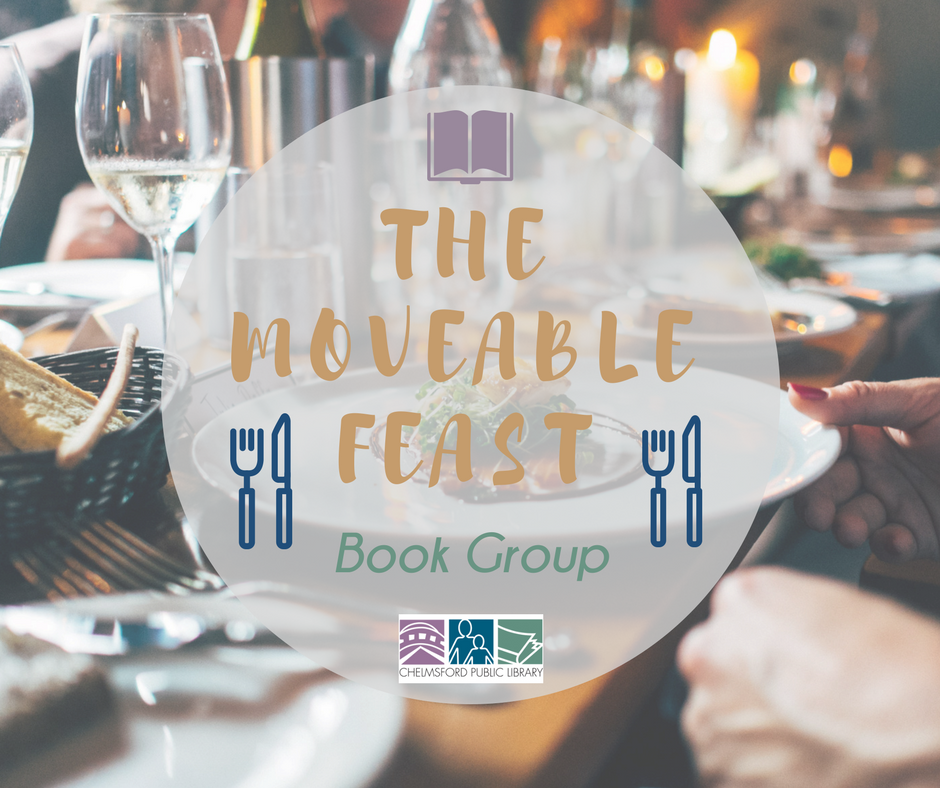 If you haven’t been able to join one of our book groups Monday through Friday, then please consider joining us on Saturday, December 9th, 2017 from 2pm – 4pm at The Java Room (14 Littleton Road, Chelmsford, Ma.) and

our new Moveable Feast Book Group.   We will be discussing The Immortal Life of Henrietta Lacks by Rebecca Skloot.  This bestseller published in 2010 took science journalist Skloot ten years to research and to write.  Over the years, she interviewed family members multiple times, including Henrietta’s youngest daughter, Deborah, who was instrumental in sharing  her life experiences, and telling the story of her mother.

Henrietta Lacks was an African American woman (1920-1951) who died from cervical cancer.  While being treated at Johns Hopkins Hospital her cells were harvested, grown, and shared around the country and around the world for research.  The shorthand for Henrietta’s cells became known as HeLa.  During the time of Henrietta’s illness and subsequent death, she and her family were unaware that her “immortal cells” were being used for scientific research, and have never received monetary compensation from Johns Hopkins. We have all benefited from HeLa cells which have been used for decades in combating polio, different forms of cancer, and AIDS. In April 2017 Oprah Winfrey starred in the HBO movie adaptation of the book.

For additional information on the nonprofit foundation established by Rebecca Skloot in 2010:  The Henrietta Lacks Foundation

Reserve your book today, and join us for the discussion!

Contributions to both the Chelmsford Public Library funds and to the Chelmsford Friends of the Library are tax deductible to the extent permitted by law.

The Chelmsford Friends of the Library is registered as a 501(c)(3) nonprofit organization.