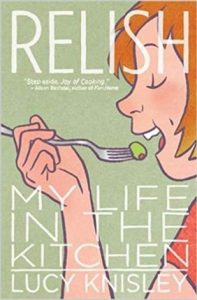 A picture is worth a thousand words….every picture tells a story….seeing is believing!  The drive to create visual art, to capture a moment in time or to tell a story through pictures, is as old as humanity.  Though the written word may have pre-eminence in the modern world, we are still visual beings, and as such we can’t help but respond to images of all types—from cave drawings to emoticons.  In February, our Bibliobites group explored the second Chelmsford One Book title, Lucy Knisley’s memoir Relish.  This narrative explores the author’s “life in the kitchen,” as the subtitle says, and is written in graphic format.  This made for a different type of reading experience, where the art is equally as important as the text; perhaps more so.  How did our group respond to the style, the story, and the recipes (also in graphic format)?

Thanks to the Friends of the Library, who sponsor the One Book program, we all had copies of the book that were ours to keep.  It’s a tidy paperback, not tiny but small enough to tote with ease.  The artwork is full-color and the text hand-drawn (it was actually hand-traced from a computerized font, as we learned from the author herself at the library’s event on March 1).  For several in our group, it was a first experience with the graphic format, and opinions varied.  Some equate graphic novels with the comic books they read as kids, and it was hard to get past that feeling.  However, there’s plenty of text to read; we enjoyed her writing but there were complaints about the size of the text, which was fairly small.  The clear font did help!   Some compared the visual experience to reading a magazine; and as with Ann Hood’s Kitchen Yarns, each chapter could be read as its own complete story, which made it easy to dip into the book at will.  Most of us admitted that we focused on the words when reading; unfortunately there are no visual artists in our group who could provide insight into the conventions and subtleties of graphic novel art.    On a gut level, we enjoyed the drawings, which are expressive and charming.  It’s a different way of approaching reading, and like anything else it takes a bit of familiarity to appreciate its form.

For most of us, our first impulse when we want to convey a memory or revisit an event in our lives is to write it down.  But a visually-oriented person makes sense of life experiences by drawing them.  During her talk at the library, Ms. Knisley called this process “sketchbooking”—like journaling, but with drawings.  So a graphic novel or memoir tells a story, but the way something looked needs to be equally represented; hence the emphasis on the drawings.  The recipes at the end of each chapter are also in graphic format, which made them seem a little complicated to follow.  As with Ms. Hood’s memoir, some of the recipes were for things that most of us already have recipes for, like chocolate chip cookies; or items we’d just as soon buy, like pesto.  However, for a few recipes, like the one for sushi on p. 96, pictures make the whole process seem much more doable, and fun!  But, as in any memoir, the point isn’t the recipe itself but the story behind it and the feelings it evokes.  And while Relish isn’t a memoir that discloses dark secrets or deep traumas, it still has emotional resonance with its themes of family, food, and the connection between the two.  For our group, this title had its pluses and minuses– it wasn’t really something we could cook from (much), and while we enjoyed the author’s stories, many people just weren’t crazy about the format.  In the end our voting averaged out to 3.1 (out of a possible 5). 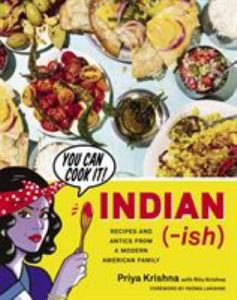 So we didn’t do much new in the way of cooking in February, but our March book, Indian-ish by Priya Krishna, promises to provide something intriguing and different.  We’ll be exploring a mostly new-to-us cuisine, familiar perhaps from restaurants, but not so much in our own kitchens!   We’ll meet to discuss this title at our next meeting on Friday, March 27 at 11 AM in the Fireplace Room. Books are available at the main desk, all are welcome.