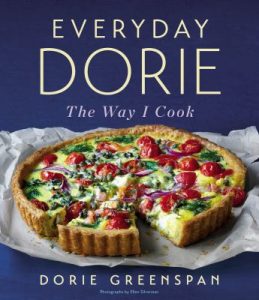 What do you get when you combine cold weather, short days, a long stretch between meetings, an ongoing pandemic that has most of us at home almost all the time, and a cookbook filled with dinner ideas?  You get a lot of cooking going on, so buckle up, folks– this could be a long ride!

This month’s title, Everyday Dorie by Dorie Greenspan, did seem to be peculiarly suited to the time of year and the circumstances in which we find ourselves.  The theme of this book is casual meals that the author whips up on any given weeknight.  Though the emphasis is on main dishes, there are appetizers, side dishes, and desserts as well.  There’s even a chapter at the end on basics, that covers projects (some simple, some more elaborate) that you might feel like tackling if, I don’t know, you were in your house all the time.

The book itself is a nice hefty squarish tome; the shape meant that the pages were wider than the norm, and happily the book stayed flat no matter where it was opened.  There are plenty of beautiful, up-close photos, and the pages feature ample white space and easy-to-read type.  At the end of most recipes there’s information on storing and reheating, as well as serving ideas and ways to, as the author says, “play around” with the ingredients.  There were also plenty of verbose headnotes; and while some don’t enjoy these short prequels, at least here they were mostly in the form of tips for success, and not the name- or place-dropping that has become so common.  On the other hand, had the headnotes not been so lengthy, many more of the recipes could have each fit on one page, a most desirable feature.  Book editors, please take note! 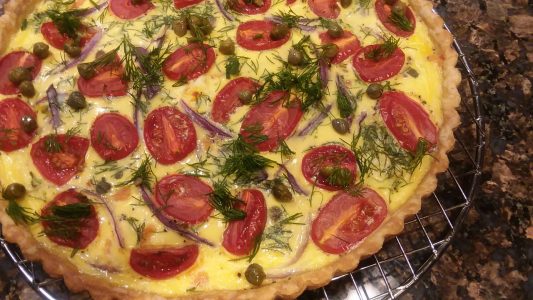 As mentioned, there were major amounts of cooking going on, so let’s get to it.  A few recipes caught the eye of several members, and these proved to be among the best-liked.  The recipe shown on the book’s cover, lower east side brunch tart, was one of these winners.  There was praise for the tart dough, which was easy to work with (including the “great idea” to roll out between 2 sheets of parchment paper) and baked up nicely.  We enjoyed the filling’s creamy combo of smoked salmon, cream cheese, capers, and dill.  This recipe seemed more special-occasion than everyday, but definitely worth the time and expense. The 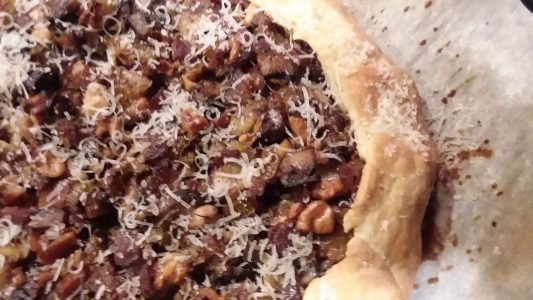 mushroom-bacon galette was without a doubt a keeper.  There was lavish praise for the filling (“I could’ve just eaten that”) with its savory and smoky notes; and the crust (slightly different from that of the brunch tart) was flaky and tasty.  This crust had a bit of sugar, which seemed a little odd, but “it worked!”  Overall, it was just “fantastic– one of the best recipes I’ve ever made!”

Since it’s winter, we made lots of soups and stews.  Moroccan-spiced chickpea and noodle soup was “really hearty” and made a big potful.  Though the recipe contained meatballs, the general consensus was that they weren’t necessary, and anyway they were “too plain.”   Those who made this liked it enough that they would make it again; but one big flaw was that it called for 3 tablespoons of ground ginger; the general reaction was, “no way!”  We decided it must be a typo; but even cutting back to 2 teaspoons or less, there was plenty of spice; the recipe calls for several others besides the ginger.  Another soup that featured meatballs, gingered-turkey meatball soup was a comforting, Asian-inspired  bowl.  It did need the optional add-ins to amp up the flavors, but this was easily done and would enable diners to customize to taste.  Though the author claims it doesn’t make a good leftover, we found the opposite to be true: those who made it felt it got better with age.  Roasted butternut squash soup turned out to be “OK– but not great.”  The method of roasting the squash, with the skin on (which you then had to peel off after baking) seemed unnecessarily awkward and messy, especially since a sticky mixture of oil, maple syrup, and soy sauce was poured over the squash before roasting (“be sure to line the pan with foil like she says!”). 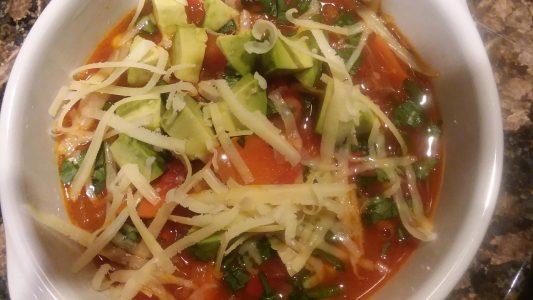 Bean and tortilla soup was also just “OK.”  Multiple toppers were listed at the end of the recipe, but even with these added, in the end it was “kind of boring.”

There’s a chapter devoted to chicken, and this was a popular choice for many.  Three people made “super simple” sweet chili chicken thighs.  One person loved them; for another they were OK; and for the third the sauce tasted bitter (this is starting to sound like Goldilocks!).  Ponzu chicken was another easy dish with an Asian twist; in this case the salty/ lemony Ponzu sauce was a good foil for the chicken. 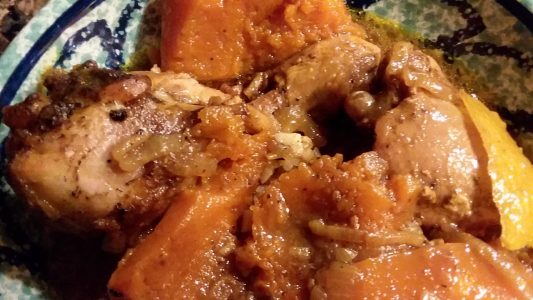 Lemon-fennel chicken in a pot took its namesake flavor from fresh lemons, but in this case the lemon was “overpowering.”  The fennel taste was assertive, but those of us who like fennel were happy about that.  Altogether, this was a straightforward, tasty braise; but next time we’ll use less lemon.  Spatchcocked chicken was as good as any roast chicken, though nothing extraordinary.  However, it’s a great technique to use and fun to say!

In the fish category, one hit was the cod and beans en papillote.  Though the individual foil packets were a bit fussy to put together, the combination of beans, fish, and tomatoes was a bit different and delicious.  This was another recipe that aged well (at least for a few days) despite the author’s claims that “there is no keeping this dish once it is cooked.”  Seafood pasta pulled out all the stops with fish, shrimp, and squid; but the result was “eh!”  And it really needed the lemon, despite it being listed at the end as optional.  More lemon appeared (I’m sensing a trend here) in 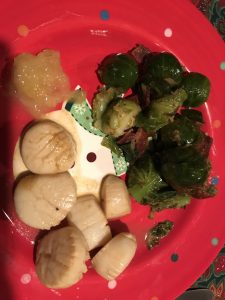 twice-flavored scallops; in addition to lemon juice, lemon goop garnishes the scallops once cooked.  The goop is “custardy” (like a lemon curd); it was easy to make and kept well.

Additional main dishes we tried included bourbon-roasted pork loin (“really good”), umami burgers (“I needed many new condiments…super-tender, liked the veggies in it”), and pasta with cabbage, winter squash, and walnuts (“OK– it looked pretty; liked the dried cranberries”).  A couple of recipes turned out to be projects: stuffed cabbage, after a lot of work, was “disappointing– the sauce was too sweet and I didn’t like the lemon in the filling.”  That good old standby, spaghetti and meatballs, was a delicious version of this classic; adding sausage to the meatballs was a yummy twist.  As the recipe states, the meatballs “drink up the sauce,” but that meant there wasn’t quite enough left for the spaghetti.

Even after all those main dishes, we still had some energy left for sides, like gingered beet salad (“it was fine”), 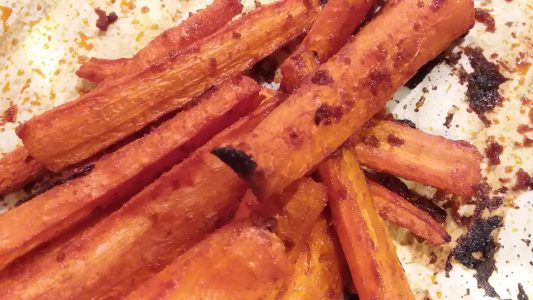 sweet and smoky roasted carrots (“very good, different– love the smoked paprika in these”), and cowboy caviar or side (“not a good leftover because of the fresh tomatoes– but I would make it again”).  Three people made maple syrup and mustard brussels sprouts; this was “good, but used too many pots.”  The syrup and mustard have become a classic pairing for brussels sprouts, and it’s a “go-to” combination for one person.  Another changed up the recipe significantly, adding in raisins and apple, which was “fabulous.”  One big flop was the oven-charred tomato-stuffed peppers.  Though this is one of the author’s signature recipes, it was not as advertised; the bread crumbs got unpleasantly soggy inside the pepper halves, and the lemon slice atop the crumbs never cooked and was overly chewy.  The photo looks “fabulous– but don’t bother.”  Roasted squash hummus also sounded enticing, but it was “bland” and “looked like something you get from a newborn baby’s diaper.”  I note that there is no photo of this particular recipe!

And last, we come to desserts.  Cornmeal buttermilk loaf cake was a bit too dense (possibly needed more leavening?), but it was excellent toasted.  Apple custard crisp had too much streusel on top of the apples; it never browned but instead turned into “a big dry mass.”  But the big winner in the dessert section was the dark chocolate pudding, which was incredibly silky with fantastic chocolate flavor.  After hearing how good this was, I think we were all ready to whip out a saucepan and make some!  I know it’s on my list of future desserts to try.

If you’ve read this far, it should be obvious by now that we gave this book a thorough test-drive.  Some commonalities emerged: lots of Asian flavors and condiments; a preponderance of lemon; a wide variety of spices.  Some recipes seemed too time-consuming or labor-intensive to be called “everyday,” though there certainly were simpler ideas as well.  In once again reviewing our discussion and the book  I concluded that (as the subtitle indicates) this is a rather personal book for the author, and if you like her style, you’re all set.  Just be sure you like lemons!! But seriously, we enjoyed this title and I think all of us came away with a few keepers.  Two people even bought the book, which doesn’t happen that often.  In the end, our voting averaged out to 3.3, out of a possible 5.  That’s actually a pretty decent score for this group.

Our next meeting will be on Friday February 26 at 11 AM.  We’ll chat via Zoom; if you aren’t already on our mailing list, please email group leader Andrea Grant.  This month we’ll be taking a little break from cooking with Ruth Reichl’s most recent memoir, Save Me the Plums, which covers her years as editor-in-chief of Gourmet magazine.  Copies are available at the main circulation desk or via curbside pickup.