Warm sunny days are here, and who wants to spend them standing over a hot stove?  Wouldn’t you rather put together a cool, crunchy, savory meal of greens or grains or pasta complemented by a freshly made tangy dressing?  Main-dish salads are a (mostly!) quick and delicious solution for hot-weather meals, and our two titles this month explored salads both familiar and innovative. 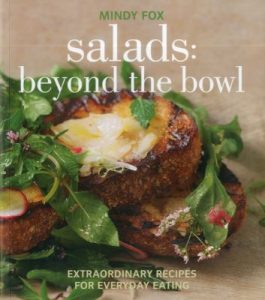 Mindy Fox’s Salads: Beyond the Bowl includes salads that are meant as sides, plus those that are hefty enough to go solo for dinner.  We all noted the many drool-worthy photographs, and liked that most recipes were on one page.  Alas, the binding on my copy was so tight that the book wouldn’t stay open by itself, though time and use will take care of that problem!  In general we thought the recipes were a bit fussy and labor-intensive, though the end result was usually quite good.  For some reason, I think we associate “salad” with “simple and quick,” so it was a mental shift to realize that with this book we’d need to spend more time creating (if not actually cooking) the salad and its components.  Among the simpler recipes we tried were the blueberries, feta, and mint, an unusual combination that was unexpectedly delicious.  Also different,

green melon, cubanelle peppers, and ricotta salata offered a welcome, subtle riff on the better-known watermelon/feta salad.  On the plate, it had a cool, pale-green presentation and was mild yet flavorful.  The tender carrots with miso and tahini were quick to make if you bought pre-shredded carrots, or have a food processor; the dressing with its Asian flavors brought new life to what many think of as a boring vegetable.

Moving closer to the main dish department, the potato salad with charred poblano peppers, sweet corn, and crema had a fair amount of prep; but the combination had lots of zip, and made enough for more than one meal.  The freekeh salad with fava beans, grilled asparagus, and roasted lemon was easily a meal in a bowl, though peas had to be substituted for the fresh fava beans, which are difficult to find.  This salad was hearty but not heavy, and made great lunch leftovers.  Sometimes a recipe gives you too much of a good thing, as was the case with the 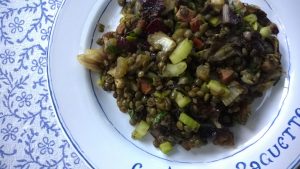 lentils, grilled radicchio, and chorizo.  The recipe called for a pound of radicchio (a whole head), which made the resulting salad quite bitter.  Once much of it was picked out, the remaining combination of lentils, celery, chorizo, and some radicchio was tasty; and it aged well.  Frisee and cucumber salad with mexican-spiced pork and guacamole was a harmonious combination of sliced grilled pork atop greens, with a tart and flavorful guacamole on the side.

Frisee proved difficult to find, but any crisp green can be substituted.  Though there were three separate components, this dish was fairly quick to make– a virtue we always appreciate!  Warm shrimp salad with Indian-spiced lentils, yogurt and pepitas was a winner, though lentils were swapped out in favor of a combination of chickpeas and kidney beans.  This recipe had plenty of spice without being overpoweringly hot, and its varied textures kept things interesting. 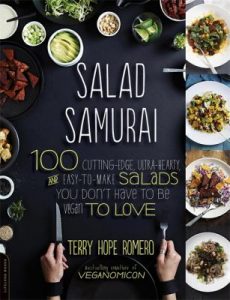 Our other title for the month, Salad Samurai by Terry Hope Romero, proved a bit more intimidating for most people.  Romero is a well-known vegan chef with several cookbooks to her credit.  So Samurai makes plentiful use of tofu and beans (since the recipes are designed to be main dishes), and of course uses no meat, eggs, or dairy.  These considerations sometimes necessitated extra prep time, and if you don’t like tofu or beans,  you’re out of luck.  Like Fox’s, this book also features delectable photos; and Romero’s trademark enthusiastic and humorous writing makes for an enjoyable read.  There were some complaints about inconsistent editing, and that all-too-common situation where the photo (however lovely) doesn’t match its recipe.  But those brave enough to venture into tofu territory came back with good reports: strawberry spinach salad with orange poppyseed dressing had really wonderful flavors, as did the asparagus pad thai.  Both were somewhat labor-intensive, requiring prep for the tofu itself (pressing and then cooking in advance), dressing, vegetables, and nut toppers.  The flavors of east-west corn salad were also delectable, and like most of the recipes tried from this book, it made a substantial quantity.  Monday night red beans and rice salad was good, but perhaps more ordinary than many of the other recipes in the book; it didn’t stand out in any particular way, though at least it was fairly quick to prepare. 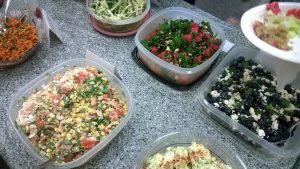 Since this was our last meeting until September, we ended the morning with a potluck lunch featuring several of the recipes discussed above.  It was wonderful to be able to taste such a variety of salads; many thanks to all who took the time and trouble to contribute.  Two members brought dessert as well (hooray!); here’s a link for the limoncello ricotta cheesecake  we all enjoyed.

Though people stated that they liked the salads they tried (and one person liked Salad Samurai so much that she bought it!), voting reflected a bit of ambivalence.  A few people live with a Mr. Fussy who isn’t fond of salads, which limited experimentation with the books, while others were put off by the time and planning ahead required for some of the recipes.  There was general consensus that the flavors and combinations presented were worth the trouble, if you had the time and inclination.  So, ultimately both books averaged out to a 3 (out of a possible 5) chef’s hats rating, though that overall number disguises some vast differences of opinion.  That’s statistics for you!

Thank you to everyone for your participation over the past year.  Your opinions, comments, and sage advice are always enjoyed and appreciated.  Our next meeting will be September 30 at 11 AM in the Fireplace Room; all are welcome to join us.  Enjoy your summer, don’t spend too much time in the kitchen, and see you in the fall!