For people who love to cook, talking about food and sharing recipes is just as much fun (sometimes more fun!) as baking, grilling, or stir-frying.  That impulse to share often expresses itself in cookbooks produced by community groups, whether churches, schools, social clubs, or even libraries!   This month we took a look at several titles, most self-published, some traditionally published– but all providing a fascinating peek at real-life cooking. 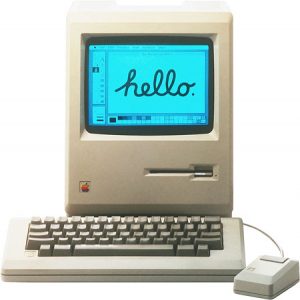 Many of the locally-produced titles we reviewed were printed in the 1980s and 1990s.  Those of us of a certain age may recall that this was the first time that books could be semi-professionally created with “desktop publishing” software, and it was obvious that many groups took advantage of this then-new technology.  But having the ability to create something doesn’t always translate to an excellent product; and there were numerous complaints about recipes that were lacking ingredients or complete instructions, or that just didn’t work– since they probably weren’t tested.  Books from this era were repeatedly described using the word “dated,” as they often suffered from an over-reliance on, for instance, cream of mushroom soup or non-dairy whipped topping.   But almost everyone did appreciate that the recipes were mostly simple and used readily available ingredients.  Some of the titles I’ll mention are member’s personal copies or out-of-print, and as such are unavailable in our consortium.  But perhaps you have a few of these lurking on your shelves somewhere– maybe it’s time to dust them off and try a few recipes, as we found some hits among a fair number of misses!

Several in our group own books that were produced by Chelmsford organizations: the Garrison House’s Cookie Book; Aldersgate Church’s Seasoned With Love; the Unitarian Church Cookbook (from 1949!); and the South Chelmsford Village Improvement Association Cookbook.   One tasty dish from the Aldersgate book,

chicken with honey and orange, was a combination of only 4 ingredients (chicken, honey, orange juice and onions).  The method needed a bit of tweaking, but the whole was definitely greater than the sum of its parts.   Our neighbor Westford produced Westford Kitchens, which also seemed quite dated, though it was produced in 2003.  But this book had the famous Jordan Marsh blueberry muffin recipe, which is “the best!”  Interestingly the recipe only called for one cup of blueberries, which didn’t seem like enough.  Beth Ann’s Best, a book from a Framingham synagogue, had an excellent carrot cake recipe with a “really good” frosting.  But this late 1950s book featured lots of lard and sugar, which doesn’t appeal to everyone!  And we all got a good laugh from a book published by a Maryland church that had lengthy, detailed instructions for baked plump possum; the recipe ended with “send out for pizza!” 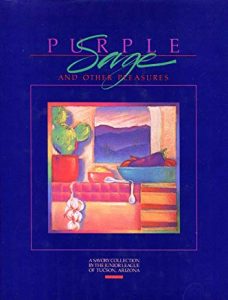 Some of our books were professionally published; two of these were published by Junior Leagues, one in Tucson AZ in 1986, and the other in Portland ME in 1982.  The Portland book, RSVP,  was highly praised for its “fabulous” New York cheesecake and its “very sweet but yummy” poppy seed tea bread.  Also hits: the sweet potato souffle and “the best blue cheese dressing ever!”   The Tucson book, Purple Sage and Other Pleasures had some fantastic vegetable recipes: purple cabbage, honey baked onions, and marinated asparagus; all received an enthusiastic thumbs-up.  This book in particular seemed quite professional, with healthy, practical recipes that were easy to make.

A few books provided a window into a different place or time.  The Southern Foodways Alliance Community Cookbook, published by the University of Mississippi in 2010, is an eye-opener for a New Englander: a full chapter devoted to all types of gravy, for one!  Interestingly there were no recipes using beef, but plenty of fish and pork, including deep-fried bacon.  Hits included a savory creamy corn pudding, and spicy turnip greens, which featured tomato, garlic, onion and one tablespoon of cayenne pepper!  Carolina coleslaw was tasty, though the dressing had “so many” ingredients, including a whopping 1 1/2 cups of oil. 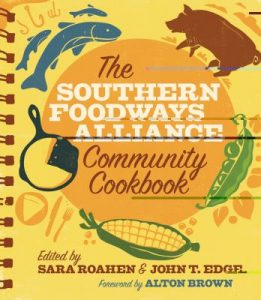 Liquid pork certainly had an intriguing name; this dish proved to be an all-day adventure involving (among other things) smoke detectors going off! The result was “really good,” but it was such a production that the experience probably won’t be repeated.

Returning to more familiar ground, the New England Innkeeper’s Cookbook, a compilation published by Yankee Magazine, had some definite hits: squash muffins had good squash flavor and aged well; Southwest strata was a tasty combo of tortillas, beans, spinach, mushrooms, cheese, and sausage; and Jarlsberg vegetable bisque was “the best soup ever,” a magical combination of broccoli, carrots, celery, onions, and plenty of cream and cheese.  Perfect for a raw, late-winter day.  The only flop was the colossal cookies, which weren’t very good– they were quite dry, perhaps because the only dry ingredient was rolled oats.  Hometown Cooking in New England had a nice collection of classic, simple recipes; the pumpkin muffins were “wonderful;” but the squash soup had “too much curry!”  Best of the Best From New England was in a similar vein; the squash yeast bread was unexpectedly delicious and made lovely, aromatic toast (we must have all been in squash mode!); and tomato cognac soup was a delicious, sophisticated version of this classic.  It was easy to make and definitely kicked it up a notch.  But golden Parmesan potatoes, despite their enticing name, were fairly boring.

This month’s theme prompted a few people to revisit some ancient culinary history– one person re-read her mom’s Household Searchlight, a book published by Household magazine in the 1930s.  Another member perused her mom’s hand-typed personal recipe book from around 1940, and decided to make war cake, a popular treat of that era; so named because it contains no butter, eggs or milk, which were rationed during WWII.   So, vegan alert– baking without eggs isn’t a new thing!   Some of these older books also contain recipes for cleaning products, and in this category as well, we discovered that what’s old is new again, as several household recipes used vinegar as the main ingredient– still valued for its effectiveness and non-toxicity.   Though we didn’t rate any of our books, most people thought it was a fun project to explore these “cultural artifacts!”

We’ll next meet on Friday, April  26 at 11 AM in the Fireplace Room.  We’ll be discussing Dinner: Changing the Game by Melissa Clark.  Was this title a game changer, or was it game over?  All are welcome,  hope to see you there!