As snow swirled outside, a smallish group met on the last day of March to discuss our experiences with two Food52 titles.  Our main book was Food52 Genius Recipes: 100 recipes that will change the way you cook.  A few people also checked out Food52 Baking: 60 sensational treats you can pull off in a snap.  Both of these titles are, in one way or another , the brainchild of Amanda Hesser and Merrill Stubbs, co-founders of the popular crowd-sourced Food52 website.  Their ever-expanding list of titles includes a book of vegan recipes, one on salads, and a forthcoming one about ice cream.   With so much experience behind them, do these authors/editors deliver on their promise of “genius,”  in changing the way we cook?

It turned out that most of us made vegetable-centric recipes from the Genius book.  The chickpea stew with saffron, yogurt, and garlic was delicious and different, but it did have a pronounced saffron flavor; so if you don’t like this pricey spice then you won’t like this dish.  The radicchio salad with Manchego vinaigrette was also a bit different, and delicious as well.  One good tip that appeared in this recipe: to tame the bitterness of radicchio, soak it in ice water for 15 minutes.  This did seem to work!  Two people tried the potato scallion cakes and thought they were a great use of leftover mashed potatoes, though the potato mixture was on the sloppy side and couldn’t be shaped into patties as described.  But it was easy enough to scoop the batter into the pan with a spoon.  The green lentil salad was on the bland side; the predominant flavor was vinegar, which wasn’t enjoyable.  And the garlic green beans were boringly basic; the cooking technique didn’t elevate them the way the recipe claimed it would.  The warm squash and chickpea salad with tahini used some ordinary ingredients, but the sum turned out to be greater than the parts, and this was  a delicious and substantial salad.  Three people made the gratin of zucchini, rice and onions with cheese;

we all agreed it was a yummy dish, but we weren’t sure if it was worth all the fussy extra steps involved in making it.  It did make a largish amount, though, so you could definitely eat it more than once.  Another tip we picked up from this recipe:  a spoonful of raw rice added to soups and sauces will thicken them nicely without contributing obvious flavors.  And of course this works best when the resultant dish is one that is pureed.  The zucchini gratin used this trick, and the rice did make for a more substantial final product.

In the breakfast department, one person tried the poached scrambled eggs, which were very good– tender with no added fat needed.  However these also took more work than average to prepare, so you probably wouldn’t make them on a regular basis.  The cottage cheese pancakes were a hit– easy to make and “really delicious– these would be great for brunch.”  And the roasted applesauce was also simple to make and quite tasty.

Unsurprisingly, there was a lot going on in the dessert department.  The dense chocolate loaf cake was, as advertised, very chocolatey; and the flavor improved over a few days’ time.  The directions instructed you to add the wet and dry ingredients to the butter/sugar mixture “spoon by spoon” which seemed unnecessarily fussy.  Perhaps their spoons are larger than ours?  Two of us tried Marie-Helene’s apple cake, with somewhat different results.  The recipe called for “four large apples;” and depending on that definition, you could wind up with more or less moisture in your batter, which is important in a recipe that was mostly apples.  The consistency of one cake was more like a bread pudding; it was moist and delicious with lots of apple flavor, but not a cake in the usual sense of the word.  Smaller apples produced something more cake-like.  This concept might be fun to tinker with, but it would have been helpful had the recipe given weight or volume for the apples.

Staying with the dessert theme, but shifting to another book, those who used the Food52 Baking title were highly satisfied with it.  The double layer coconut pecan bars were awesome, and a big hit with “Mr. Fussy,” who, it is claimed, does not like coconut.  The cold oven pound cake was “to die for,” and the tomato soup cake tasted like a spice cake, with the secret ingredient completely incognito.  The lemon sponge cups were fantastic, and brought back good memories of our member’s mom’s lemon sponge pie.  The cream cheese cookies were “OK,” but when brought to a meeting they quickly disappeared, to rave reviews.  The chocolate banana bread was good, though it took much longer to bake than the directions indicated, and wasn’t exciting enough to tempt our member away from her usual banana bread recipe.  The easy as pie apple cake suffered a similar fate, being good but not outstandingly better than other recipes.  The cheese crispettes, though savory (not sweet) were excellent– crispy and cheesy and just the thing for serving with drinks.  Easy to make, too.

The books themselves are both large format, about the size of a sheet of paper, which seems to have become the standard size for new cookbooks.  As is also true of most newer books, there were many luscious photos, and some showed a recipe’s entire sequence from ingredients to finished product.  There were a few complaints– some recipes had directions that were unnecessarily wordy, to the point where you had to read them two or three times to get at the actual meaning.  And measurements could be inconsistent; sometimes an ingredient would be listed by weight, sometimes by volume, and sometimes in random fashion (see “four large apples” above!).  In these books, the recipes come from many sources, so perhaps that explains the different measurement units, but we felt the editors should have standardized things to make it simpler.  A few of us checked out the Food52 website and weren’t terribly impressed.  The way it was organized didn’t seem user-friendly, and there’s a lot going on visually, which can get annoying.  The search function is also kind of fussy– I was looking for the recipe for soft chocolate cherry almond cookies, and I typed “chocolate chip cherry cookies” (and the recipe does have chocolate chips in it)– and I got zero hits!  It took a bit of fiddling to figure out how to find what I was looking for.  However those cookies are really, really good!

We must have been distracted by the snow piling up outside, or our conversation– because we forgot to vote!  But judging from our discussion, I’d guess the baking book would score near a 5 (the top rating), and the Genius book maybe a 3.5.  We’ll have a retrospective vote at our next meeting, and I’ll post the results here. 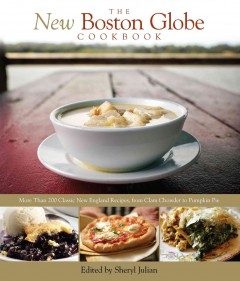 Next month’s titles will coordinate with our One Book title, Stronger, by Chelmsford native Jeff Bauman.  We’re focusing on Boston and New England with The New Boston Globe Cookbook  and The North End Italian Cookbook.  Copies are available at the main desk.  Please join us for our next meeting on Friday, April 28 at 11 AM in the Fireplace Room.   All are welcome; see you there!