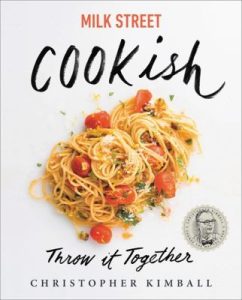 Christopher Kimball has almost single-handedly transformed the world of home cooking.  Love him or hate him (and there are fierce advocates on both sides), his reach and influence are undeniable.  He founded Cook’s Magazine in the 1980s, which begat Cook’s Illustrated in the 1990s, which then morphed into the America’s Test Kitchen empire, which includes print, radio, television, and web.  Phew!  In 2015, he abruptly departed ATK and founded Christopher Kimball’s Milk Street, a magazine that has since diversified into radio, television, web, and— cookbooks!   Which brings us to October’s title, Cookish.  Milk Street’s tagline is “changing the way you cook,” and this book’s variation on that is “throw it together” using six ingredients or fewer and (mostly) taking 30 minutes or less.  We’ve test-driven this concept before (with Jamie Oliver) and were unimpressed.  Could this newer riff on that idea turn us into true believers?

We were all certainly attracted to the notion of speedy and delicious.  But in order to meet this goal, we discovered that a fair number of condiments are required.  Logically enough, if you want your end result to be flavorful, and you’re cutting flavor-developing time out of the equation, you need to start with assertive ingredients.  Accordingly, there was lots of soy sauce, fish sauce, hoisin, curry, smoked paprika, many types of chilies, lots of garlic– you get the idea!  This approach worked well, except when it didn’t!

In the “it really worked department,” four of us made roasted butternut squash with hoisin and chives (October is butternut squash month?).  Three of us adored this simple, colorful combination, and thought the pairing of squash and hoisin was inspired.  For one person with a squash traditionalist in the household, it was just “OK” but it’s a keeper for the rest of us.  Barley risotto with leeks and mushrooms turned out to be an “awesome” take on the classic combination of barley and mushrooms; and toasted bulgur and lentil soup was likewise “fantastic,” accented with garlic and lemon zest.  Broiled caribbean mahi mahi was another hit with its herby/citrus-y sauce; as a bonus “it looked just like the photo!”   There were several well-liked chicken dishes: moroccan chicken skewers (“very tasty”), spiced ground chicken with currants and pistachios (“unusual combo but very good– Middle Eastern-ish”),

orange-ginger chicken (“easy and delicious version of a classic”), and spicy stir-fried chicken and snow peas, which was only “pretty good,” but “better the second day.”

The section on one-pot pastas proved to be a big hit; there was praise for the less-water one-pot method, which was new to us.  Gemelli with tomatoes, salami, and fontina was a bit on the spicy side (our cook used pepperoni, a listed alternative), but overall this combination hit the mark, and was excellent left over.  Penne arrabiata was a keeper: quick, easy, and flavorful with its fresh basil, pecorino cheese, and red pepper flakes.  And, lest we forget, only one pot to wash!

We were on the fence about some recipes; most of the following got at best an “OK” from our cooks: sweet and savory skillet-steamed eggplant, mustard-roasted cauliflower (“it was fine…”), skillet-charred brussels sprouts with coriander and cashews (“cashews surprisingly didn’t add much…wouldn’t rush out and make again”), chutney-roasted eggplant with scallions (“good– looked exactly like the picture”), ramen salad with shrimp and scallions (“nothing special– ramen with soy sauce”), chili-soy noodles with bok choy and peanuts (“OK– I have other similar recipes that are better”), and soupy rice with mushrooms and greens (“better the second night, flavors needed to meld”).  Pork, sweet pepper, and cabbage stew turned out to be “a nerve-shattering experience,” as our cook wrestled with a large and unfamiliar cut of pork; when all was said and done, the result was “fairly good…a maybe.”  Perhaps, like most stews, it will improve in the fridge?  Cabbage was also featured in

cannellini beans and cabbage with pancetta and parmesan, which two people made; for one it was “pretty good;” but for another it was a keeper, “love this combination– I could eat a lot of it.”  Curried carrot salad was also a hit and a miss; one person didn’t like the curry with carrots, though the other did and enjoyed how the curry played with the sweetness of the carrots and raisins.  Both noted that the amount of curry called for seemed excessive: one tablespoon for a pound of carrots.  This was a bit overpowering in a dish where it was the main flavor, with no cooking to mellow it.

Overall, we liked this take on quick and easy.  We enjoyed most of the flavor profiles, and we live in a large metro area where less-common ingredients are easy to come by.  We liked that many ingredients also included an alternative, so you could use what you had on hand and/or could find at the supermarket.  We did note some negatives: some recipes used a lot of salt (for instance, the hoisin squash recipe called for one tablespoon) or overpowering amounts of spices (see carrot salad above).  In order to keep to the 30-minute time frame, oven heats were frequently listed at 475 or 500 degrees, which meant keeping a bit of an eye on things to prevent scorching or setting off the smoke detector!  Many recipes didn’t list stovetop burner heat at all, which, while perhaps not strictly necessary, is helpful when you’re doing something for the first (or even second or third) time.  Similarly, cooking times were often not listed.  Guess Mr. Kimball is making sure we’re paying attention while cooking!  And speaking of cooking, what’s the difference between “cook” and “cook-ish”?  The subtitle of this book is “throw it together,” but it could be argued that all cooking is throwing it together in some way.  Yes, these recipes are fairly simple– but you are definitely cooking.  That’s my soapbox moment for this month!

The book itself was a pleasure to use– there were truly lovely, artistic photos of most recipes, and since those recipes were short and sweet, almost all fit on one page.  Bonus!   We also enjoyed how some recipes were grouped by cooking method, like stir-fry or the aforementioned one-pot pasta.  This made it easy to try a new or different technique on multiple dishes.  And if you like Milk Street’s concept, there are several other cookbooks to peruse, as well as the TV show and an extensive website.  In the end, our ratings averaged out to around 3.5 (out of a possible 5), a better than average score for our group.

We’ll next meet on Friday, December 10 at 11 AM.  Plan to chat via zoom; we will meet outdoors in person if the weather is unusually warm(!)  We’re baking this month with local favorite Joanne Chang’s latest, Pastry Love (I highly recommend the chocolate-rye cookies!).  Copies are available at the main circulation desk or via curbside pickup.

Happy Thanksgiving to all, and see you on the 10th.

**And special thanks to LC for the post title!