The Library will be closed Monday, Jan. 20, for Martin Luther King Jr. Day 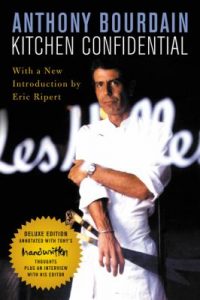 After a summer off, we met on a sunny September morning to dish (pun intended) about one of the food world’s most unique characters and its archetypal bad boy: Anthony Bourdain.  In the New York City restaurant world of the 1990s, Bourdain was undoubtedly well-known; but his 2000 memoir, Kitchen Confidential, brought him national fame.  His indelible descriptions of “the life,” as he calls it, along with his unsparing portraits of the people and places he encountered along the way, provide a wide-open window into the inner workings of an industry—and have enlightened, entertained, and terrified restaurant-goers in equal measure.  This title has become a classic in its genre; but does it still appeal almost twenty years after its publication?

To start, let’s get the obvious out of the way: Bourdain has an incredible (as one of our members put it) “potty mouth.”  He’s eminently quotable, but often those quotes must be censored in publications  because of his love of four-letter words.  This #@%! habit didn’t seem to bother our group too much, as his choice of words seemed consistent with his personality and the situations he was describing.  Most really enjoyed his writing style and thought he was an excellent writer, which begged the question:  is he more of a writer or a chef?  These aren’t mutually exclusive talents, of course, but it was fun to debate—and the question returned when we discussed our experiences with his cookbook (see below).   Many of Bourdain’s chapters focus on his “bad behavior;” and though we admired his unsparing truthfulness about his shortcomings, the bad boy shtick did get a little old.  Since our group read the memoir Sous Chef a few years ago, we weren’t totally surprised by Bourdain’s descriptions of the daily grind in a restaurant kitchen, but the culture of crazed super-macho masculinity that he so vividly portrays still has the power to shock.  How this type of kitchen culture developed, and why it remains so prevalent would make for a fascinating anthropological study!  Though Bourdain himself admits (in the chapter about chef Scott Bryan) that not every place is so “dysfunctional,” it does seem to be the rule rather than the exception; and Bourdain clearly embraces and enjoys the chaos.

Despite his self-reported shortcomings, most in our group admire Bourdain.  He was a person who was uniquely and supremely himself, and that always appeals.  Many are devotees of his various TV shows (No Reservations seemed to be the overall favorite); loved for their adventurous and no-holds-barred approach.  His untimely death in 2018 has only brought his contributions to the world of food into sharper focus (check out the tributes in Anthony Bourdain Remembered).  Our appreciation was reflected in our voting: we averaged out to a 4.67 out of a possible 5, probably the highest score ever for this group! 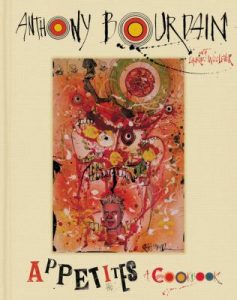 Though we may perhaps now think of Bourdain mostly as a writer and world traveler, he was first a cook—but interestingly, he’s written very few cookbooks (those who can, do; those who can’t, write cookbooks?).  However he did publish one in 2016: Appetites, which our group reviewed.  Bourdain writes in his introduction that these are the dishes he likes to eat, and to make for family and friends.  He says, “…there is nothing remotely innovative about the recipes in this book,” and overall, our group had to agree!  Beef goulash was “totally not unique” and the meat somehow never became tender.  The black bean soup was “fine, not fabulous;” the chorizo in it was tasty but somehow didn’t “go” with the other flavors in the dish.   A few other recipes were deemed okay but not exceptional: roasted baby beets with red onion and orange were pretty much basic roasted beets; Belgian endive with curried chicken salad was (as described in the headnote) “…1970 called….;” and tomato salad was, like the beets, a basic combination.  Mushrooms sautéed with shallots was just that; and the ratatouille was good, but “too fussy,” as all the vegetables were cooked individually.  It was better the next day, though, so at least there were enjoyable leftovers!  One complete flop was the grill bitch’s bar nuts; these completely refused to dry out, and then burned, perhaps due to a too-high (325 degrees) oven temperature?

On the more positive side, pomodoro sauce was “light…easy, and good!”  It was used in the meatball parm hero, which had tasty meatballs (“liked the veal in them, and the herbs”), and made plenty.  Roasted cauliflower with sesame was a flavorful treatment for this now-popular vegetable, but only if you like tahini and don’t mind a finished dish in an unappealing khaki color!  Macaroni and cheese was “awesome—super-cheesy and rich.  I could taste all the different cheeses!”  And

braised pork shoulder with fried shallots and pickled vegetables was a winning combination; the piquant vegetables contrasted beautifully with the savory pork.  This dish was a bit of work, but it made a lot, and the leftovers improved with age.

As noted, this book didn’t contain much that was new and/or different.  Most of us already have similar recipes for many of the dishes in it, and Bourdain’s variations weren’t enticing enough to make us switch.  The book itself is an interesting read; the photography is unique (some might say peculiar) among cookbooks, and the cover painting is equally uncommon.  It’s almost more of an art book than a cookbook, and reflects Bourdain’s persona.  However, it’s what comes out of the kitchen that counts, and in that respect it didn’t make the grade: our voting averaged out to a 2.1 (out of a possible 5).  So, maybe we wouldn’t want to cook with Bourdain, but we’d sure love to chat or travel with him.  Sadly that’s not possible; but we’ll continue to enjoy his books and videos in the future.

Our next meeting will be on Friday, October 25 at 11 AM in the Fireplace Room.  We’ll be discussing Moosewood Restaurant Favorites by the Moosewood Collective.  The Moosewood Restaurant in Ithaca, NY has been in the vanguard of vegetarian cuisine for almost 40 years— is their food still exceptional?  And is the meatless lifestyle for you?  Pick up a copy at the main desk and then join our discussion on the 25th; all are welcome!