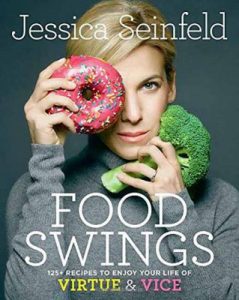 With so much conflicting information out there about the best or healthiest way to eat, what’s your average person to do?  Do we come down firmly on the side of “virtue,” focusing on protein, veggies, and modest amounts of “good” fats?  Or do we succumb to “vice,” and hunker down with lots of sugars, carbs, and the tempting trifecta of butter, cheese, and full-fat dairy?   Jessica Seinfeld’s newest book, Food Swings: 125+ recipes to enjoy your life of virtue and vice, aims to find a middle ground where we can enjoy eating — well, pretty much anything!

As you might guess, the book is organized into two halves: the first, dubbed “virtue” contains recipes that showcase ample quantities of vegetables, whole grains, and lean proteins.  Conversely, the “vice” half cuts loose a bit, with recipes featuring plenty of cheese, red meat, and calorie-dense desserts.  In either half of the book, we found that most of the recipes were relatively simple and easy to follow, and many fit on one page.  The large format was attractive, and photos were numerous and visually appealing.  And thanks to its larger size, the book stayed open when we wanted it to.  One common complaint was that the time listed to make the recipe was noticeably inaccurate– it took most of us way longer than the author stated.  We ultimately decided that the time listed referred to time spent actually cooking, after all ingredient-locating and prepping was complete.  But once all the chopping and cooking was done, did we enjoy the results?

On the “virtue” side, there were some definite winners.  Four people made roasted spaghetti squash with almonds, cinnamon, and sage— and everyone thought this was a fantastic combination of flavors.  In particular, we liked the fresh sage.  One drawback– the thick-skinned squash is tricky to cut in half when raw; caution must be exercised to avoid injury!  Moroccan chicken also featured a nice combination of spices and was easy to put together.  We also liked

cod with garlicky tomatoes and potatoes which was a simple yet tasty one-pot meal.   Another good weeknight choice was tangy and spicy chicken and peppers, a colorful dish that came together quickly.  Quinoa chili was “much better than I thought it would be,” really delicious and probably a keeper!  Quinoa also made an appearance in the quinoa banana-date muffins, which were a tender yet hearty breakfast muffin, pleasantly sweet without any added sugar.  One caveat: they contain mostly almond flour, which is an expensive ingredient  And roasted plums with honey and pistachios turned out to be the simplest, most amazingly yummy dessert– roasting the fruit brought out its sweet-tart flavor, and the pistachio and mint garnish put it all over the top.

There were some misses in this half of the book as well.  Vegetable soup was “a definite no,” as its flavor was anemic– probably because its base was water, not broth.  Roasted carrots and chickpeas with feta vinaigrette  was initially pretty appealing (and the crispy chickpeas by themselves were excellent),  but unfortunately it wasn’t good when reheated.  Baked vegetable chips were hard to get right– the potato peeler recommended to make the chips made slices that were too thin, and using a mandoline seemed to make them too thick!  Two people tried the ginger salmon with sesame cucumbers and thought it was just OK– no one liked the cucumbers; and the dish needed more accompaniments to make it a meal (how about the spaghetti squash above??).  Farro bowl with shaved broccoli and Parmesan was loaded with obviously healthy ingredients, but it wasn’t that enjoyable to eat; the taste was “meh!”

Lemon-thyme milk-braised chicken with spinach was similarly noticeably virtuous; but though the milk-braising idea was intriguing, overall it was a fairly boring dish.  And (as the photo shows), the milk sauce curdled and separated despite careful adherence to the recipe, which made a visually unappealing mess.  Lastly, coconut milk panna cotta was a disappointment– it was very plain, and even if it was on the “virtue” side, it definitely needed more sugar– or something!

So we certainly gave virtue a fair try; what about vice?  Many of the main dish recipes on this side of the book could be defined as comfort food– for instance, a few people tried red wine and shallot beef stew.  The recipe featured a rich wine sauce with chunky vegetables; it reheated well, as many stews do.  One person felt this recipe was nothing special, but others thought it was a very good version of this classic dish.  There were some other classic dishes in this section that we enjoyed: the lasagne bolognese was “really delicious– meaty and creamy;” corn chowder with bacon was extra-good with its crunchy-fresh off-the-cob sweet corn; shrimp scampi had a tasty, hearty sauce; and pulled bbq chicken sandwiches with coleslaw had a fantastic classic sauce, and the coleslaw was excellent as well.  Blue cheese burgers weren’t anything innovative; but were definitely enjoyable, since how can you go wrong with a burger and blue cheese? 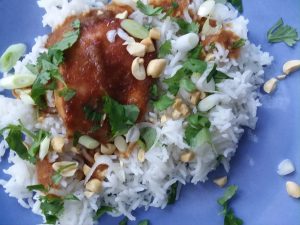 Peach and sriracha chicken over coconut rice was a winner– nicely spiced chicken and rich-tasting rice.  Its garnish of scallions, peanuts, and cilantro made the dish look beautiful, and enhanced its flavors as well.   Spicy eggplant pasta also had a bit of heat, though not all that much– just a bit of red pepper flakes.  The roasted vegetables in this dish were first-rate all by themselves, but the completed dish was “good, not great.”  Pine nut and parsley pasta was similarly good, but “kind of ordinary.”  On the other hand, creamy mushroom pasta was super-creamy and smooth, with plenty of mushrooms– just a wonderful combination.   Crispy fish with tartar sauce was crunchy and tasty; it was a standard version of this classic that most of us always enjoy.   With your fish you might like skillet-roasted potatoes and tomatoes, which was a fine combination of the two main ingredients.  In the dessert section, two people made one-pot mocha brownies.  While they were perfectly fudgy and chocolatey, neither cook thought they were better than their usual recipe.  And apple galette showcased a nicely flaky crust with a complementary tart Granny Smith filling.

Overall, though most in the group enjoyed at least a few recipes from this book, no one felt that it offered anything groundbreaking.  The idea of sometimes eating super-healthily and other times more indulgently isn’t a foreign concept for most people– so do we need a cookbook to validate that idea?  It also seemed that some of the recipes from one category could have arguably been in the other– perhaps another indication that “healthy” is a more fluid concept than is generally acknowledged.  People did enjoy the simplicity and ease of preparation of most of the recipes, and there were some definite standouts.   Those who liked this title really liked it; but some were ambivalent– and thus our voting averaged out to a 3.5 (out of a possible 5).

We’ll next meet on Friday, October 26 at 11 AM in the Fireplace Room.  We’ll be exploring an ’80s classic this month: The Silver Palate Cookbook by Julee Rosso and Sheila Lukins.  Copies are available at the main desk.  All are welcome, hope to see you there!