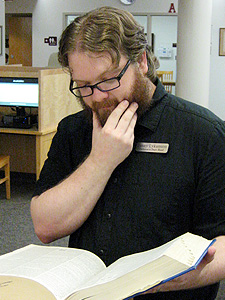 Danny started at the Chelmsford Public Library in March of 2016. His first job was as a library page, which he started two days after his fifteenth birthday, so it’s no surprise that he eventually settled on libraries as a career. Outside of the library, Danny enjoys writing in his spare time. His pursuit of all things nerd is extraordinary, especially games of all kinds.

Danny was highlighted in the Real Librarians of Chelmsford series in January 2021.