Our September meeting brought us together on a picture-perfect fall day.  It was good to see everyone after our summer break, and we welcomed some new faces as well.  Since we had two titles to discuss this month, there was much to say! 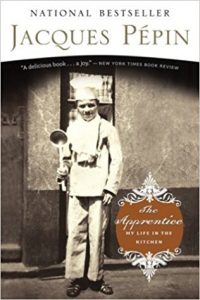 Some chefs are so well-known through their books, restaurants, and/or TV shows that we barely need a last name to identify them,  and such is the case with Jacques Pépin.  But where and how did he get his start?  What were the experiences that shaped his life and his approach to food?  These and many other questions are entertainingly explored in Pépin’s autobiography, The Apprentice.  Everyone who read this book thoroughly enjoyed it.  Pépin comes across as an unpretentious, hardworking regular homme who has never been afraid to try something new and different.  We loved his stories about his impressively energetic mother and his gregarious father, who were able to safely shepherd their family through the danger and chaos of WWII.  We were impressed by Pépin’s work ethic, as he apprenticed (without pay!) from age 13 to 16 at a restaurant in Bourg-en-Bresse.  We were further impressed by his decision to leave his comfortable life as a cook in a well-regarded Paris restaurant for the unknowns of life in America.  We were surprised to discover that he worked for the Howard Johnson chain for several years, improving their menu while streamlining their operations.  And we’re amazed by his neverending creativity:  books, TV series, cooking classes, and kitchenware line (based on his own artwork, naturellement).  We decided he never sleeps! 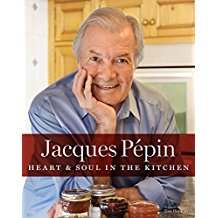 Pairing The Apprentice with one of his more recent cookbooks, Heart and Soul in the Kitchen, easily enabled us to make connections between Pépin’s life and his cuisine.  Many of the recipes are based on classic French dishes, but there’s often a twist; and Pépin will be the first to tell you that any recipe can and should be tweaked to suit one’s own needs and tastes.  This philosophy certainly resonated with our group, none of whom is shy about altering a recipe!  Though we may think of French cuisine as being labor-intensive with esoteric techniques, this book highlights simple, quick dishes that are rooted in French traditions without being hamstrung by them.

So let’s get to the details: most of us made main dishes, since Pépin, by his own admission, is no pastry expert.  Someone did make the apple galette, which uses store-bought pizza dough for the crust.  This made a tasty pie; but unfortunately it’s not something that keeps well– the pizza dough got stale quickly.  In dinner territory, a few of us tried fish dishes: fillet of sole Riviera with pico de gallo

was exceptionally quick to prepare and had a piquant, yet creamy sauce.  Cod in light cream sauce also had a simple cream-based sauce which turned out to be excellent with chicken, too!  Two people tried broiled salmon with miso glaze, which was easy and delicious.  However miso can still sometimes be difficult to find, or is located in odd places in the store.  We tried a few pasta dishes: spaghetti with tomatoes and herbs was a disappointment– kind of boring with a sauce that was too minimal.  Fusilli in spicy garlic tomato sauce was also underwhelming despite healthy amounts of garlic and red pepper flakes.  Fettucine à la playa was good but a bit salty from the four ounces of anchovies!  The “sauce” was really a salad-like mix of beans, olives, sun-dried tomatoes, the anchovies, and some cheese.  It was a tasty combination on its own and would make a nice lunch.  Also for lunch you could try the black lentil salad with eggs, which was quite good despite the inclusion of celery, which added a “weird” note.  Celery then took on a starring role in the celery gratin.  In the US we don’t think of celery as a cooked vegetable, but this recipe, with its Gruyère topper, was different and good.  It needed a bit of crunch, though– perhaps some toasted breadcrumbs?

One person made (and brought in for us to try!) the Spanish tortilla, which we enjoyed; it’s “a good basic recipe” which you can easily vary to suit yourself;  as written, the tortilla seemed a bit dry and needed something to up the flavor quotient.  One recipe that really hit the mark with those who made it was the eggplant-tomato gratin, which looked “just like the picture” and was positively scrumptious (though Mr. Fussy, an avowed eggplant hater, could not be convinced to try it!).  The recipe for spinach-stuffed pork loin chops was accompanied by an enticing photo, which matched its taste.  The sauce was a bit runny but the whole thing was so delicious it didn’t matter.  Poulet a la crème (a traditional dish from Pepin’s hometown) and chicken jardinière were both satisfying and provided a bit of a cooking lesson, as both dishes started out the exact same way but ended up completely distinct from each other.

There were, of course, some criticisms.  Pépin seemed to use some ingredients repeatedly; chives, red pepper flakes, and jalapenos come to mind.  A few people didn’t care for the photos; they looked too staged and some of the food appeared unnaturally shiny or wet.  We noted that in both books, Pépin is not the least bit camera shy.  For instance, check out the semi-naked chefs in the group of photos following page 82 of The Apprentice.  That’s not really a criticism, of course– just something duly noted!  Pluses of the book were its large format and friendly, relaxed tone.  We felt this might be a good book to give someone learning to cook; the food is interesting and varied, gives you lots of good ideas, yet is generally pretty foolproof to make.

In the final analysis, our votes averaged out to a hair under 4 chef’s hats (out of a possible 5).  That’s high praise from this group!

Our next meeting will be on Friday, October 27 at 11 AM in the Fireplace Room; all are welcome.  This month we’ll be firing up our ovens to experiment with Molly Gilbert’s Sheet Pan Suppers.  From soup to nuts, Gilbert claims that this one pan can do it all– we’ll find out!  Books are available at the main desk.