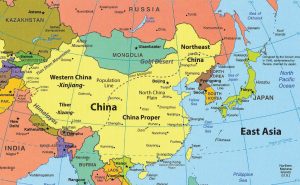 Nephew is an Asianophile.  Or is it  Asiaphile?  Though I’m not sure which term is correct, Nephew (your basic southern/eastern European mutt) greatly enjoys the cultures and foods of East Asia.  He’s taught English in Taipei, Taiwan and Seoul, S. Korea, living in each for more than a year.  He’s traveled in Vietnam and Thailand, and his current job takes him to China several times a year.

Nephew’s living in Seoul was what first made me pay attention to Korean food; and coincidentally, it was at about that time (2012) when Korean restaurants started appearing in the Boston area.  It was an adventure to wade into a cuisine which is unique and new to me, but also partially familiar as it uses some ingredients common to many Asian cultures.  It was also around this time that HMart opened a store in Burlington, MA.  Though there are several Asian markets in our area– there’s V-Mart in Lowell, Shin Shin in Lawrence,  Chung Ge in Ayer, and M & H Oriental Food Market right here in Chelmsford– I went to HMart because I was intrigued by the idea of a Market Basket-sized store devoted to Korean food.   Hmart and markets like it  contain a world of food about which I knew (and still know) very little—and the lack of consistent English labeling frequently made my explorations both more puzzling and more interesting.  But I’m still fascinated by the many kinds of kimchi, the innumerable types of noodles and rice, the vast stocks of gojuchang and red pepper flakes, and the array of cabbage varieties.  I enjoy perusing the (to me)  inscrutable labels on all kinds of shiny bags of crunchy snacks, some of which I may recognize as rice-based, but some whose contents will forever remain a mystery. 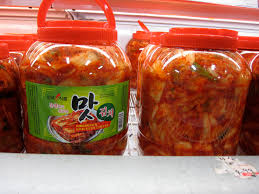 Since kimchi is one of the signature foods of Korean cuisine (probably the signature food), that was one of the things I bought at HMart, and it certainly appeared at every meal I ate in a Korean restaurant.  I always tried to buy/order a mild variety, so as not set my lips on fire, but I wasn’t always successful.  What Koreans think of as mild was still pretty zippy to me!  At first I wasn’t even sure I liked the flavor all that much—it’s pickle-y, garlicky, spicy, and sour—but the more of it I ate, the more I came to appreciate its simple yet complex nature.  And it’s like the little black dress of Korean food—it goes with everything, it can work solo or harmonize with other ingredients, and is available in many styles!

So a few months ago, I got it into my head that I wanted to make a batch of kimchi myself.  I knew Nephew had tried making kimchi while in Seoul; and since he now lives in Boston I figured I could get him to help me and give me good advice about ingredients and preparation.  He was up for the challenge, and we planned a Columbus Day kimchi-thon.  Nephew clued me in to a blog and videos created by Maangchi, a Korean living in the US.  Her explanations and photographs made the process seem easy, so off I went in quest of ingredients, almost all of which are now available in your basic large American supermarket.  I did go to HMart for the essential Korean red pepper flakes and a Korean radish (though the more readily available daikon is an acceptable substitute); also some sweet rice flour, which is not sweet but is extra-starchy, and is needed to keep the kimchi from being watery.

In Korea, making kimchi can be a community affair, with friends and neighbors working together to make enough kimchi to last a family all year.  Needless to say, I made a much smaller quantity; the recipe I chose is called “Easy Kimchi” on Maangchi’s website. 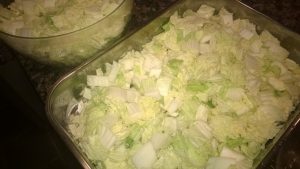 So: first, I chopped the cabbage (eight pounds worth!), and salted it thoroughly.  We left it alone for a while to wilt; then drained it, rinsed it, and set it aside. 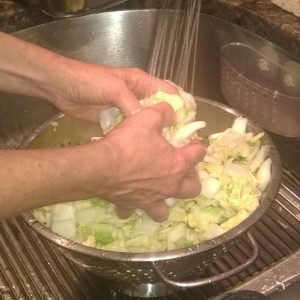 Nephew turned out to be an ace julienne-er, efficiently slivering neat piles of carrot, radish, green onions, and leek. 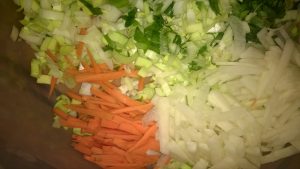 While he was chopping, I made the “porridge,” a mixture of water and sweet rice flour that is heated until thickened, like a custard.  Then I added a little bit of sugar, lots of fish sauce and garlic, fresh ginger, and frightening amounts of red pepper flakes—though not nearly as much as the recipe recommended. 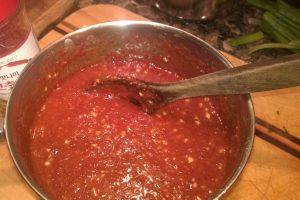 When the porridge had cooled, we combined it with Nephew’s vegetables.  Finally, it was on to the big time: putting on our latex gloves (yes, the gloved hands do look a little bit creepy here!) and mixing the cabbage with the porridge and vegetables. 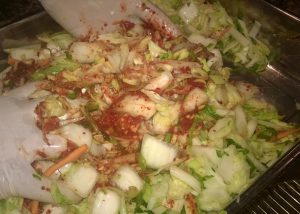 You can eat the kimchi as soon as it’s made, which we did that day; and if you don’t want it to ferment, you put it in the fridge right away. 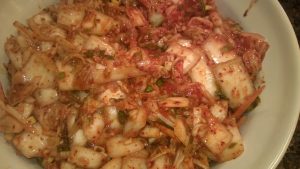 I left mine out on the counter, in a covered container, to see what would happen.  After a few days, little bubbles appeared in the liquid, and we started smelling that pickle-ish, sour smell (which sounds bad but isn’t).  So we knew it was fermenting; I tasted every few days to get an idea of what it was doing.  I didn’t want it to get too strong, so after a couple of weeks I put it in the fridge.  It will still continue to ferment, but very slowly.

That first night, I made some bibimbap and we had that with kimchi on top, though I don’t think that’s authentic.  Bibimbap is another iconic Korean dish: a bowl of rice topped with various seasoned vegetables and meat and a sunnyside-up egg.  You mush it all together and then slurp it up! 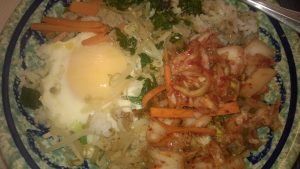 It’s comfort in a bowl and has become one of my favorite things to eat.  Having homemade kimchi to go with it was just the icing on the cake, so to speak.  I hope that’s OK with any Koreans who might be reading this post.  Or Nephew, for that matter!

If you want to try making Korean food at home, check out some of our consortium’s titles.  Note that Maangchi has now published a book—I’m going to have to take a look at that one myself.