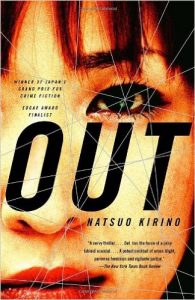 We recently discussed Out, by Natsuo Kirino, in the Wednesday morning book group. This was kind of a departure for the group, a dark thriller taking place in the underworld of Japan. Our discussion group was smaller than usual, and we suspected that the violent nature of the book led some members to avoid reading or finishing it. While those who did read it were glad they did, it wouldn’t be accurate to say they liked it. It certainly gave us lots to think about though.

The novel takes place in present day Japan, and is centered on four women brought together by their dismal nightshift jobs in a food-packing factory. They share a prickly friendship, based on proximity, rather than a real sense of camaraderie. All have or had unhappy marriages, and lead miserable lives outside of the factory. Then one of the women commits murder and the others come together to cover up the crime. However, this cooperation is shaky, with the women doubting each other and their motives as they get deeper into the situation, and it gets harder to keep the secrets.

We were surprised to read about the level of subjugation of women in Japanese society, even today. A woman’s appearance decides what jobs she is able to get, and her position is always below those of the men. And they were expected to keep house and raise the children as well, while the men participated or not, as they pleased. We agreed that women still have some limitations in our own society, but nothing like what Japanese women face.

The group found it difficult to like the characters, though we mostly felt sorry for their individual situations. The main character, Masako, is smart and tough, but difficult to understand. We discussed her reasons for participating in the cover-up and concluded that she felt she had nothing else and she needed something extreme to give meaning to her life. All the women had had enough of their lives, and each found a way to escape those who were holding them down.

The main male character was extremely unlikable, although at first we thought he might be redeemed over the course of the novel. He was part of the patriarchy that controlled women’s lives, but he in turn was controlled by his own demons. There was only one male character who really respected women, but he was unable to get by successfully in Japanese society.

In the end, each of the four women finds a way out of her terrible situation, for better or worse. We readers were left with some understanding of how women can be driven to extraordinary actions. Out is a novel you won’t soon forget.