This was our first week with I Went Walking, by Sue Williams. The book uses a call and response refrain, “I went walking. What did you see?” to follow a child’s encounter with six colorful farm animals. Before he knows it, he’s being followed by the entire menagerie!

What we did: One of our activities had a bin full of small objects that matched the six colors named in the book. We used pompoms, craft sticks, plastic bottle caps, Duplo bricks, and small foam shapes, but you could use anything you have on hand. We also had six color-coded boxes that matched the six colors represented in the story. The children used small plastic tongs to pick up objects and sort them into the different boxes according to color.

Why it matters: We’ve already touched on the importance of matching and sorting games for young children. But another key element in this activity was the use of tongs to pick up and transfer the objects. Tongs, along with similar tools like tweezers and chopsticks, are a great way for children to develop fine motor skills and hand strength. They force the two sides of the hand (the thumb/index finger side and the middle/ring/pinky side) to function separately, which in turn allows the pinky side to stabilize the hand while the thumb and forefinger work on a fine motor task. This separation becomes essential when learning to write with a pencil. Hand strength and dexterity also play a role in an enormous variety of everyday tasks including fastening a button, opening a lunchbox, and cutting with scissors. 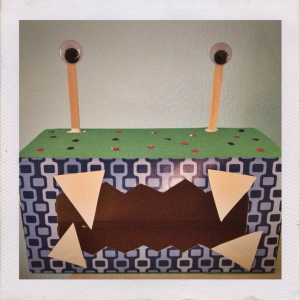 How to do it at home: If you have a pair of tongs, you’re all set! If you don’t, you can make a pair of kid-friendly chopsticks (click here for instructions) and use those instead. Children can practice using the tongs to transfer small objects from one container to another. To make it more fun, you can decorate an empty tissue box like an animal or monster, and ask your child to use tongs to “feed” the monster. We found that the children at PlaySpace had an easier time using lightweight plastic tongs. We also had a few pairs of metal tongs, but the metal had greater resistance and required more hand strength. They also found it easier to pick up soft objects that would squish a little bit when grasped by the tongs. Smoother items were more likely to slip out when the children picked them up.

Taking it to the next level: Once your child has mastered picking up soft objects with lightweight tongs, you can make things a bit more difficult by using smaller or smoother items. You can also instead of your hands to do things you would normally do anyway, like put clothes in a laundry basket or move the pieces while playing a board game. Create a miniature treasure hunt by embedding small objects in a lump of playdough, then asking your child to use tweezers to pull them out. To get the entire family involved, try eating dinner together using chopsticks instead of western-style silverware.

Additional reading: Another thing we do in storytime to aid fine motor development is fingerplays. You’re probably familiar with fingerplays even if you’ve never heard the term; fingerplays are children’s songs or rhymes that involve small hand movements. “The Itsy Bitsy Spider” is a popular example. Our library network has dozens of books of fingerplays that you can check out, with diagrams to show you the finger movements that go with each rhyme. Two of my favorites are Marc Brown’s Finger Rhymes and Hand Rhymes.