…..Portland, Oregon, that is!  I’m here on vacation visiting my brother and sister-in-law, and as is often the case when I’m traveling, I’m checking out the local food scene.  Coincidentally enough, on our first day here, my sister-in-law held up a cookbook and said, “Look at this great salad book I just picked up at the library!  I’ve already marked so many recipes to try!”  It was Salads: Beyond the Bowl, one of our June Bibliobites selections!  I guess we all have produce on the brain at this time of year.

On Saturday we went to the Beaverton Farmers’ Market.  This is one of the largest outdoor markets in the area, and features local produce, meat, cheese, bread, wine, specialty foods and more.  We saw plenty of salad greens of all types; lots of spring onions,

French radishes, and best of all– local strawberries!

We also brought home two types of aged goat cheese, some bagels, and a marionberry (similar to blackberry) pie.  Many of the vendors had samples of their food available; my favorite was a fresh Mexican chorizo, which is hard to find in our area.  I may have to pack some in my luggage for the trip home!  All in all it was a morning of gorgeous colors, textures, and tastes.

Sunday brought another warm and sunny day, so we spent a good portion of the afternoon at a local winery called Cooper Mountain.  The Willamette Valley (where Portland is located) is home to hundreds of wineries; most produce pinot noir and pinot gris.  Cooper Mountain has the virtue of being less than 30 minutes from my brother’s house, so that’s where we went.  We tried a few different styles of pinot noir, a pinot gris, and a rose blend, all eminently drinkable!  We were able to sit outside near the rustling grapevines, and sip our wine in the shade while enjoying views of the Coast range to our west, Cooper Mountain being at the top of a (very small) mountain.  Again I was debating what I could stuff in my suitcase for the trip home, but I think we may just consume what we can while here.  There’s always the next trip!

We had decided to take a short side trip to Bend, Oregon which is east of the Cascade Mountains.  This central part of the state is much drier than the Portland area (it’s a “high desert” area), and is home to lakes, rivers, and mountains which provide endless recreational opportunities.  From a food standpoint, one of the local favorites is trout, which I sampled in two forms while there– a smoked trout spread for an appetizer, and steelhead trout for my main course.  The spread was chunky with lots of delicately smoky fish, while the steelhead was rich and salmon-y and perfectly fresh; it was complemented by a lemon and caper sauce.

Berries are everywhere in the Northwest; they grow well in the area’s sunny, dry summers.  Wild blackberries appear in embarrassing profusion just about anywhere there’s a patch of soil; so it’s no surprise that many restaurant dishes feature them and their kin.  A fruit cup here would be unthinkable without berries, so predictably my breakfast of lemony ricotta pancakes came topped with raspberries and blueberries.  Admittedly they couldn’t be local at this time of year, but they were delicious all the same.   Local berries of all sorts will be everywhere in July, so it looks like I’ll miss that this year.  Perhaps I can get my sister-in-law to make some jam and send it to me!

Portland was one of the pioneers in the food truck scene; here they are called “food carts” and they are permanent structures that don’t move.  We visited our favorite pod of food carts downtown, in quest of Bing Mi’s Chinese crepe.  This is a large,thin, eggy pancake rolled around a filling of veggies, your choice of meat, and the fabulous, addictive secret sauce.

They’re made to order, and on a cool and cloudy day this steamy, flavorful lunch really hit the spot. I’d devoured more than half of it when I realized I’d forgotten to take the requisite photo!   This was all that was left when I finally remembered. 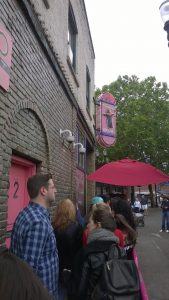 One of Portland’s most famous treats is Voodoo Doughnuts.  This small downtown shop is open 24 hours a day and has a perpetual line out the door.  On previous visits we’ve been discouraged by waits of an hour or more, but this year as we strolled by, we noticed that the line was unusually short.  As it turned out, we only had to wait for 15 minutes or so; and in fact we had trouble making our choices before we arrived at the counter.  One of Voodoo’s claims to fame is their unusual flavors– for instance, we tried the popular maple-bacon bar, a rectangular donut with maple frosting and a strip of bacon across the top.  And the voodoo donut, which is your basic jelly donut, but it’s shaped like its namesake and has a pretzel stake sticking out of its tummy!  We also bought a donut with a hibiscus glaze, and a plain glazed to judge against hometown Dunkin’s.

Voodoo has instantly identifiable packaging– we saw many people strolling proudly about with their bright pink boxes.  Though Voodoo is a longstanding Portland tradition, and has been written up in probably every food magazine you can think of, we didn’t think the donuts quite lived up to the hype (though of course we had no difficulty in polishing them off).  For my money, the best donuts are cider donuts you can find in the fall at almost any farm stand, or if you want a road trip to the original Portland (in Maine), try the yummy potato donuts at The Holy Donut.

I haven’t even touched on the extensive craft brewery scene here, or the fantastic coffee I drank everywhere; both of these items are so ubiquitous that a local wouldn’t even think about it.  My favorite part of being in Portland is getting to see my family– but the excellent and diverse food scene here is certainly a bonus!

Fun fact: Portland was named with a coin toss. The two main founders of the city, Francis Pettygrove and Asa Lovejoy,  were from (respectively) Portland, ME and Boston, MA.  They agreed that whoever won the two-out-of-three toss could name the new city after their hometown.  Guess who won?  Even more fun fact for me: I recently discovered that Asa Lovejoy is one of my husband’s ancestors!