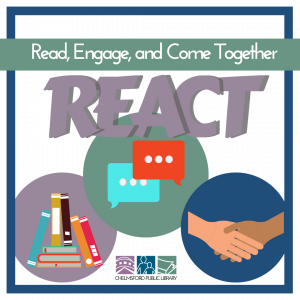 The Chelmsford Library is embarking on a year-long project to promote civic participation and education with our REACT Grant: Read, Engage, And Come Together.

Join us as we explore six key issues that most impact our community and society as a whole, through engaging programming, in depth, moderated discussions, films, readings, and quality resources. The schedule of these six areas are:

You won’t want to miss what we have in store, so keep your eye on our calendar for more REACT programming.

As of the 2016 election, the population of American citizens of voting age (18+) was approx 224 million people, but only 157 million of those people were registered, and only 137 million of those reported to the polls to cast their vote in the 2016 Presidential election.

The turnout is far lower for important local elections. For example, mayoral elections in 50 US cities only garnered 15% of eligible voters.

What are the reasons for low engagement among US citizens?
Why is voting important?
What can be done to increase voter engagement?

As of September 2015, the Census Bureau reported that 43.1 million people lived in poverty in America, and The National Alliance to End Homelessness reports that 553,742 people were experiencing homelessness in America.

More than 40 million people in America need the government’s help to keep from going hungry, and many families struggle to receive adequate nutrition. For many children, school breakfast or lunch may be the only real meal they receive per day, though the quality of these meals varies, and the number of elderly individuals experiencing food insecurity exceeded 10 million for the first time last year.

If unemployment is only 4.4 percent, why are so many still living in poverty?
Should the Federal Government spend more on anti-hunger programs?

Racial Justice and One Book

Since 1960, the ethnic and racial statistics show decrease in the number of caucasian people, and an increase in those identifying as black, Hispanic/Latinx, Asian and multiracial. Projections expect that this trend will continue through 2060. Chelmsford too enjoys an increase in diversity since 2010.

Such an increase in diversity is something to be celebrated. However, it seems in recent years that animosity between people of different racial or ethnic identity has increased.

How do we reverse this trend and return to working toward
a more united people?
Where do racial injustices exist in your community and in society as a whole?
Why is protecting equity and opportunity for all people important
to our country?
What measures can we take to increase equity and opportunity in America?

Check out the full Racial Justice and One Book brochure [pdf] for suggested reading, films, podcasts, and additional resources.

Research shows that sea levels have been climbing at an increased rate (3cm per decade since 1990) due to human caused climate change. This does and will continue to pose serious challenges to coastal regions, increase the likelihood of devastating storms and endanger marine wildlife.

With human ingenuity and the technological advances available to us, action is possible to mitigate the effects of climate change, and keep our planet strong for future generations.

Check out the full Climate Change and the Environment brochure [pdf] for suggested reading, films, podcasts, and additional resources.

The last few decades have seen major strides in civil rights for Americans who identify as gay, lesbian, bisexual, transgender, or queer. In recent years some conservatives have pushed for exemptions from civil rights laws for individuals or companies refusing, on religious or moral grounds, to provide services and even health care for LGBTQ people. Additionally, sexual orientation and gender identity are the motivation for more than one sixth of all hate crimes in the US, and bullying among teens and children is a major contributing cause of increased rates of suicide, self-harm, and homelessness.

What can we do as a community to be more inclusive and to encourage understanding of LGBTQ rights?
How do homophobia and transphobia contribute to an unsafe environment and what steps can be taken to fight prejudice?

Immigration to this country began with the Spanish in the 16th century and the first English in 1607, crowding out the American Indian inhabitants. Later immigrants from all over faced resistance from the descendants of earlier colonizers as they began to have a profound impact on the identity and growth of the country. Yet America’s promise of a new life in a free country still draws hundreds of thousands of immigrants each year.

But perhaps now this promise is being revoked even before immigrants reach American soil. Recent attempts to enact unconstitutional and deeply harmful changes would dramatically change our policy and traditions.

The Civic Engagement REACT Program is brought to you with federal funds provided by the Institute of Museum and Library Services and administered by the Massachusetts Board of Library Commissioners.