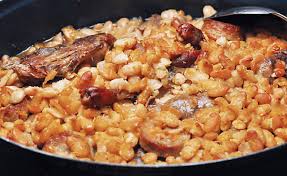 Every year in January, after the rush of the holidays is over and we settle into some real winter, I spend a day making cassoulet.  This iconic French dish is a hearty casserole of meat, beans, and some token vegetables, cooked with wine and tomatoes and topped with buttery croutons.  It’s the perfect antidote to a raw winter day, and like many stews tastes even better left over.  But it is kind of an all-day affair; beans must be soaked, meats must be cut up and browned, and then everything is assembled and baked.  I usually use a recipe from the Cook’s Illustrated website, which mostly uses common ingredients we can find in any supermarket.

HOWEVER…while most large supermarkets now carry an astonishing array of Asian, Italian, or Middle Eastern ingredients, French-specific items seem to have fallen by the wayside—if they were ever available in the first place.  Par example, every year I go on a quest to find the beans traditionally used in cassoulet, which are called flageolet.

They are smallish, oval, pale-green beans that I’ve discovered can be difficult to find locally (yes I know I can order them on Amazon, but what fun is that?).   The readily-available Great Northern bean is a passable substitute, but hey—if I’m only doing this once a year I want to be authentic about it.  In past years I’ve seen flageolet at Whole Foods but no luck this year.  Market Basket, Hannaford, and Wegmans were also a no-go.  Finally I remembered that Idylwilde Farms in Acton carries some less-common grocery items, and—yes!  There they were, sitting placidly on the shelf with all the other dried beans.  Interestingly enough they were grown in Maine!

Another traditional ingredient used in cassoulet, which seems to be on every bistro menu in France but is rarely seen here, is duck confit.

This is a duck leg which has been cooked in and then covered with duck fat, a pre-refrigeration method of preserving meat.  The confit can be eaten by itself or added to main-dish salads or casseroles, where it adds richness and flavor.  But in the US this is definitely a specialty item; I did find it at Wegmans but c’est tres cher (it’s very expensive!).  In my duck-buying  expeditions I discovered that any form of duck, whether fresh, frozen, or otherwise preserved, is not widely sold in supermarkets.  Whereas in France, again, it is on every restaurant menu in some form, and probably in every market as well.  It’s a curious cultural difference!

So, flageolet—check!  Duck confit—check!  The cassoulet ingredients were cooked,  assembled, and went into the oven.  What to eat with it?  A green salad immediately came to mind, but being in a “difficult French ingredient” mode I had decided to make celeri remoulade, a salad made of grated celeriac (or celery root).

Our Bibliobites book for this month, The French Market Cookbook by Clotilde Dusoulier, has a few recipes that use this root vegetable.  So by now I know who sometimes carries it.  It’s available in many supermarkets, but is ordered infrequently and in small quantity, so it’s hit-or-miss as to whether you’ll find it on any given visit.  Again, this is a very common ingredient in France and all of northern Europe.  I often wonder if celeriac will be the next cauliflower—that is, an ingredient which has been around forever, sort of in the background, and suddenly becomes a produce superstar.  Celeriac is a knobby white root vegetable that looks sort of like a hairy turnip. It has a mild taste, celery-ish with hints of anise, and a texture similar to a turnip’s.  Dusoulier’s book has a recipe for a potato/celeriac gratin which was delicious.  The celery root lightens the dish a bit and adds a subtle, welcome flavor.

As for my salad, predictably enough, the day I needed the celeriac there was none to be found on the shelf at Wegmans.  C’est la vie!  I wasn’t in the mood to hunt it down elsewhere so we enjoyed our cassoulet with a green salad after all.  It was delicious, if I do say so myself; so as Julia Child would say—Bon Appetit!

For those of you who belong to our Bibliobites group, have you been enjoying your French Market adventure?  Whether oui or non, please join us for our next Bibliobites meeting on Friday, January 27 at 11 AM in the Fireplace Room.

For those of you who have yet to discover our cookbook group, ce n’est pas grave! — we meet the last Friday of every month. Join us!