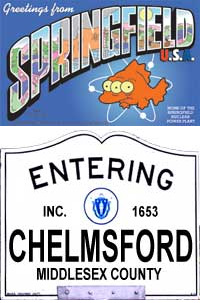 In addition to being a town in Massachusetts, Chelmsford also appears in a popular television show, The Simpsons.

According to Wikipedia’s entry for Chelmsford, MA,

“Lance Wilder, the background design supervisor for The Simpsons, was born in Lowell, Massachusetts on May 7, 1968 and raised in Chelmsford. Lance graduated from Chelmsford High School in 1986. The elementary school appearing in The Simpsons is based on McCarthy Middle School, which was Chelmsford’s high school before the construction of the current Chelmsford High School in 1974. The town hall in the show is based on the Chelmsford Public Library (prior to the recent reconstruction). Many other local businesses and stores in Chelmsford find their way into the background in The Simpsons, including Zesty’s Pizza, Skip’s Restaurant, and the now defunct Skip’s Ice Cream and Tony and Ann’s Pizza.”

Here are a few pictures of the Chelmsford landmarks appearing in the show:

News Coverage of Chelmsford & The Simpsons
In 2017, Merrimack Valley Magazine published an article on the connection between the Simpsons and Chelmsford. This article is available here.