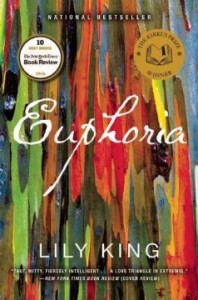 Our Evening Book Group meets once a month on the first Monday of the month. On February 1st we met to discuss Euphoria by Lily King. This novel was inspired by an event in the life of Margaret Mead and it tells the story of three young anthropologists in 1930’s New Guinea. Filled with atmospheric detail, this sensuous story relates how media darling Nell Stone and her Australian husband, Fen, flee one tribe, and, with the aid of English anthropologist Andrew Bankson, settle with the Tam, an unusual, female-centric tribe. A love triangle soon ensues.

The majority of people in the  book group loved this novel although some were challenged by the frequent changes in the narrative voice. People appreciated the lush descriptions of the landscape, the glimpse into the creative process of writing a book, and the romantic tension between Nell, Fen and Bankson. The cultural portrayals of the tribes and the rhythms of the Tams’ lives were richly evoked and compelling.

Nell’s drive and discipline were admirable – her curiosity and methods of integrating into tribal life were fascinatingly told – her dedication was doubly appreciated once we were aware that financial reward or acclaim was not her goal.

Fen was perceived as nasty and “an awful piece of work.” He was jealous, insecure, sure his wife was more talented than he and financially ambitious in a way she was not. Ruthless in his pursuit of the Flute relic, he sacrificed the life of a beleaguered native and compromised the research Nell and he were working on in exchange for a foothold in the pursuit of his own legacy. The young native’s plight was especially poignant as his time at the mines irrevocably changed him and his relationship with the tribe. While he was away, his memory reached mythic proportions and once back, he remained alone and solitary. It was no surprise that he agreed to participate in the Flute debacle if it meant freedom for his soul.

Bankson, based on the real-life anthropologist Gregory Bateson, is plagued by the deaths of his two brothers – one who died in World War I, the other who committed suicide in Piccadilly Circus. He fled this darkness to the Sepik River, living with and researching a tribe and trying to overcome his depression. On the day that he meets up with Nell and Fen though, stalled in his work and deeply despairing, he is fresh from his own Virginia Woolf–like suicide attempt — in the river, his pockets filled with stones.

This unlikely trio all fall a little in love with each other, and their passion for their work and their lives comes together one night as they invent “The Grid,” a method of arranging nations and tribes according to their character. This, too, is based on an idea that Margaret Mead had but she never formally published as a theory. She called it “the squares,” and later wrote that, “it was the closest I’ve ever come to madness.”

We discussed why the book was titled “Euphoria” and recalled that Nell observed that often two months into fieldwork, when a culture suddenly begins to make sense, “It’s a delusion — you’ve only been there eight weeks — and it’s followed by the complete despair of ever understanding anything. But at that moment the place feels entirely yours. It’s the briefest, purest euphoria.”

We discussed the idea of accurately depicting a different culture when you have insinuated yourselves into their way of life. Nell did not want to just study them, she wanted to feel their way of life too.  “If I didn’t believe they shared my humanity entirely, I wouldn’t be here,” Nell tells Bankson loftily. “I’m not interested in zoology.”  The idea that subjectivity enters into any observation, that one can’t be simply an observer was debated – we recognized that there has to be some impact. This spawned a joke about The Prime Directive from Star Trek. Here is a humorous examination of that topic you might enjoy.

One reader noted that this novel was set in the same time period as last month’s book group selection Cascade by Maryanne O’Hara but still a world away. Readers felt that the tragic events that finished the book were too sudden and hastily written. It was not a happy novel but an affecting one and definitely worth reading.

Other books mentioned during our discussion included: