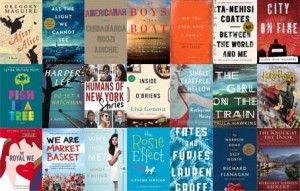 As this is the time for it, we gathered some of the Chelmsford Library staff’s favorites for the year, to get your 2016 started with something new.

The list is composed of the best books read by staff in 2015, rather than just titles released last year, though many 2015 items are on the list. The heartrending winner of the Pulitzer Prize, All the Light We Cannot See, was also a winner among staff with 5 nominations. This year’s Gone Girl-esque suspense blockbuster, The Girl on the Train, kept a few staff members riveted, as did other best-of list frequenters: Fates and Furies, by Lauren Groff; City on Fire, by Garth Risk Hallberg; and Did You Ever Have a Family, by Bill Clegg.

Other 2015 titles include After Alice, Gregory Maguire’s adaptation/ retelling of Alice in Wonderland; Go Set a Watchman, the controversial non-sequel to To Kill A Mockingbird, by Harper Lee; Mindy Kaling’s second humor/memoir Why Not Me; the touching, inspiring photo collection, Humans of New York/Stories; and the newly published magnificently illustrated version of Harry Potter and the Sorcerer’s Stone.

Some of our favorites this year examined large events through the eyes of a few. The Boys in the Boat, by Daniel James Brown, is an inspiring, against-the-odds, true-life sports story set in the years leading up to World War Two – a great pick for book groups. In We are Market Basket, co-authors Daniel Korshan and Grant Welker, (who spoke in Chelmsford back in September about the book), present the rallying inside account of a local grassroots movement that ultimately saved a beloved grocery store chain; Ta-nehisi Coates’ Between the World and Me, is a powerful and urgent treatise on race in America; and the haunting tragedies of war are conveyed in The Narrow Road to the Deep North, by Richard Flanagan and A Knock at the Door, by Margaret Ajemian Ahnert.

Other selections relate more intimate experiences, but make no less of an impact. In Lisa Genova’s latest, Inside the O’Briens, a Boston family struggles with its patriarch’s slow decline due to Huntington’s disease. A young girl, with the help of an inspiring teacher, begins to accept her dyslexia in Fish in a Tree, by Lydia Mullaly Hunt.  Americanah, by Chimamanda Ngozi Adichie, relates a young Nigerian woman’s struggles as a newcomer in America. And the problems of environmental deterioration and drought surround the characters populating a desolate near-future California in Claire Vaye Watkins’ Gold Fame Citrus.

For lighter fare, there’s The Royal We, a fictionalized romance between the Duke and Duchess of Cambridge; The Rosie Project, a quirky story of an obsessive statistician and his plot to find a wife; Single, Carefree, Mellow, in which women from different backgrounds relate humorous social situations; and The Kitchens of the Great Midwest, which tells a charming foodie narrative, complete with recipes.

There are plenty of other excellent stories on the list, as well as film and music favorites! Check out the full list online, or come in and chat to the staff about their favorites!

Have a Happy New Year!