A subgenre of speculative fiction, steampunk has adventure, historical settings, and wildly creative technology.  The name is in reference to the time period—steampunk takes place in the 19th century (often Victorian England) when steam power was still widely used.  The technology present in steampunk is where the fantasy element comes in to play—airships, time machines, & computers can all be found in the pages of a steampunk novel.

There have been plenty of incredible examples of steampunk written in the past few years including the Mortal Engines quartet by Philip Reeve and Leviathan by Scott Westerfeld, but I want to focus on a new book by Cherie Priest called Boneshaker. 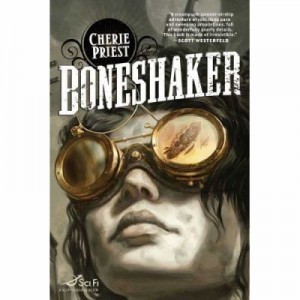 I LOVED Boneshaker!  Not only is it steampunk, it also has zombies and an isolated dystopian society—3 things I adore mixed together in one fast and furious pageturner.

Briar Wilkes is the widow of Leviticus Blue—a scientist who unleashed the Boneshaker on Civil War era Seattle.  The Boneshaker was a machine that could tunnel under the earth, but when it went on a test run under Seattle a deadly gas was released that turns it’s victims into…ZOMBIES!  A wall was built around the city to keep the Rotters and the gas (know as the blight) contained and separate from the Outskirts.

Briar’s teenaged son Zeke has crossed into the infected city in order to find information that he believes will clear his father’s name.  When Briar discovers Zeke has run away she catches an airship and descends into Seattle in order to find her son and tell him the whole truth about his father.

~This post was written by Tricia, CPL’s teen librarian who is convinced that Cherie Priest read her mind and then wrote a novel just for her.