Late autumn is the perfect season to curl up with a pile of good books and a cup of hot tea or apple cider 🙂 . If you’re looking for something new to read, check out one of the titles our teen volunteers have reviewed below!

The Awakening is a novel written by Kate Chopin, taking place in late 19th century New Orleans. It tells the story of Edna Pontellier, who struggles to fit in with the general view on motherhood and being a female of the time. She falls in love with Robert, a man that is not her husband, who eventually leaves her. She is thrust into a process of awakening where she realizes who she is and embraces her interests over society’s expectations. Never forgetting about that man, she ignores her roles as a parent to pursue her passion as an artist and painter. In the end, she fully realizes even if Robert had loved her back, she would have moved on and lost interest. As she lets the sea take her, her “awakening” and self-realization is completed.

The Awakening is not a book that usually appeals to teen and young readers. I myself was not a big fan and thought it was a boring and hard read. However, adults I’ve spoken to tell me that the book is vastly different when you’re older, and that does make sense, as it touches on many older themes. However, it does cover the expectations of genders back then, which are still echoed today through stereotyping, and conveys a strong message of ignoring societal norms. If you look past the relatively dull plot, the theme that Edna and her self-awakening carry are both intriguing and important. Though it might be a book without much action, I would recommend at least giving it a read for the deeper meanings.

The Fourteenth Goldfish is a middle-grade novel by Jennifer L. Holm. The plot centers around 11 year old Ellie, who lives with her eccentric mother. Starting middle school has left her confused, and she and her best friend are drifting apart. One day, her mom brings home a teenage stranger, who is actually Ellie’s scientist grandfather. After discovering a way to reverse the aging process, he enlists Ellie in helping him retrieve his work.

This story has a lot of information about famous scientists, but not in an overwhelming manner. I learned a lot about Marie Curie, Robert Oppenheimer, Jonas Salk, and others. There was a collection of short biographies of some of these influential people in the back of the book, which was a helpful addition.

As far as characters go, I was impressed. Usually, I feel that when adults write middle school characters, they seem exaggerated. However, Ellie felt very real and relatable. I especially liked reading about Ellie’s parents, and they didn’t push her to enjoy the same things as themselves. It was amusing to read about Ellie’s grandfather Melvin, and how he acted as an old person in the body of a teenager. Another character I enjoyed was Ellie’s friend Raj, and I think the personality contrast between the two worked nicely.

Overall, I loved this book. I’ve had it for several years, and I come back to it whenever I need a light read. It feels warm and inviting, and the cover is really cute. I would recommend this book to upper elementary students and middle schoolers, but I feel that it would be too juvenile for many high schoolers to enjoy. It serves as a great introduction for any young person interested in science. I would suggest checking out the sequel, The Third Mushroom, or other books like Flora & Ulysses by Kate DiCamillo, and The Miscalculations of Lightning Girl by Stacy McAnulty.

A Walk to Remember by Nicholas Sparks (1999) 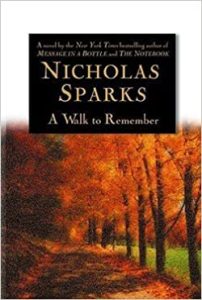 The book A Walk to Remember by Nicholas Sparks is both a coming-of-age story and a romantic tale about Landon Carter and Jamie Sullivan. This story is much more than your average love story. Told from the perspective of Landon, the novel starts off as a simple high school story – a popular boy finds himself stuck with the quiet girl who carries her Bible around everywhere and ends up falling in love with her. They go through a lot of ups and downs, but Landon starts liking Jamie more and more. However, Landon then finds out that Jamie has leukemia and does not have much longer to live.
The story of A Walk to Remember is based on Nicholas Sparks’ sister’s life. She was diagnosed with cancer and her boyfriend proposed to her because they wanted to get married before she died. For me, this makes the book much more meaningful. This book made me build an emotional connection with the characters. I really loved seeing Landon’s character development throughout the story. Watching Jamie change Landon as a person was really sweet. Jamie has a sweet personality, and takes whatever lemons life throws at her and tries to make the best of things. She is really inspiring, and I felt I learned a lot from her character. She is always looking out for others and is the nicest person ever. Even when Landon lashes out at her near the beginning of the story, Jamie still thanks him and manages to stay positive and kind. I loved Jamie’s mentality and approach to life.
I would recommend this book if you are into sweet love stories, as that is what this book is. Personally, I liked this book, and if I were rating it, I would give it a 9/10. Some downfalls of the book, however, would be that you might find religion to be controversial in the book. Overall, the story was really beautiful.

The book A Boy at War, by Harry Mazer, was published in 2001. The setting of the story is in Honolulu in 1941. Adam experiences the horrors of the Attack on Pearl Harbor. Adam’s dad is a Navy Lieutenant, and when he is around Adam tries his best at everything. Adam’s father likes to think of everything at home like everything from the Navy, and sets very high expectations for his son. One day, Adam’s father gets called to go to Pearl Harbor for duty. The events of this day make Adam a completely different person.

Earlier in the story, Adam is riding his bike on the weekend and falls into company with three boys, one Japanese and two Hawaiian. From that day on, Adam goes out with them on the weekends, until one day his father asks him about the Japanese kid he is best friends with. Adam wants to tell his father that his friend was nothing like the Japanese they are at war with, but he worries that his father will think he is disobedient. The morning that his father is called for duty at Pearl Harbor, Adam goes on a fishing trip with his Japanese friend, Davi. After being on the water for a while they see the Japanese planes come down on Pearl Harbor. Adam sees his father’s ship sink, and immediately runs over. When he gets there, the sailors give him a gun and a uniform and tell him to help them. Adam sees the injured soldiers and bodies in the ocean – he can only hope his father is okay.

This book triggers nostalgic feelings and the descriptions make you feel like you are seeing everything as it happens during this historic event. Adam feels that he becomes a man when he is given a gun and uniform, and this is a turning point for him; he has to take the job, and doesn’t have an option to go back to the way things were before. There is also some examination in this book of the racist treatment of Japanese people by white Americans during World War Two.  It is a moving and powerful story of how life can throw things at you in tough situations, with an overall message that you have to keep moving on and learn along the way.