The Wednesday Morning Book Group meets on the third Wednesday of every month at 10AM in the Main Library, and is always looking for new members. Please check our website here for upcoming dates and titles. 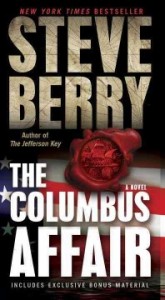 On March 16, the Wednesday Morning Book Group met to discuss The Columbus Affair by Steve Berry. The Columbus Affair is one of the selections for the 2016 One Book Chelmsford program, along two other suspense titles, There Was an Old Woman by Hallie Ephron, and The Other Woman, by Hank Philippi Ryan. Two of the library’s other book groups held discussions on those titles.

For those not familiar with Steve Berry, he primarily writes politically charged historical suspense novels. His main vehicle for these stories is the character Cotton Malone, a federal agent turned rare-book dealer who uses his knowledge in history and tracking criminals to uncover great conspiracies. Berry has penned 11 in this series so far, alongside many standalone novels including The Columbus Affair.

The March meeting to discuss The Columbus Affair was well-attended. Each member began by sharing their thoughts and most were entertained by the story, with at least one member expressing her love of “everything Steve Berry writes.” The most common compliment expressed was an admiration of the depth of research, including the 8-page writer’s note at the end that helped the reader to separate truth from literary license.

The “Affair” of the title concerns the idea that Christopher Columbus, controversial conquistador of the “Indies,” was actually a Jew attempting to establish a Jewish colony in Jamaica, maybe for them to escape the persecution they were experiencing in Europe at that time. In addition, “Columbus” may have hidden some significant treasure which, if found, could be used by nefarious present day organizations to ignite major territorial war. What is probably the most intriguing aspect of the novel, however, is the way it plays with the most well-known fact about Columbus – that there is so very little known about him at all. It’s possible the true purpose of the novel may be to implore the reader to do more research and fill in these gaps.

For many it was clear that character development was not the main goal of the novel, but then, this is often the case for suspense novels such as these. The plot moves at breakneck speed and the reader is transported from the Orlando sunshine to the streets of Vienna or Prague to the Blue Mountains of Jamaica in a reality-defying space of time. No one worries about up-to-date passports or baggage fees. Readers are distracted from contemplating these possible violations, as rich descriptions of medieval stone architecture, lush tropical settings and the dangerous and deadly figures just a few feet behind overwhelm more practical concerns. This is, after all, why suspense and thrillers are so sought after.

As noted above, most of the group agreed that they appreciated the deep level of research that went into the novel and found the history, of both the Jewish people and Jamaica to be compelling. Berry and his wife are extensive travelers, and this is clear in the detailed descriptions of the places he describes.  His passion for history is obvious too, as well as his respect for primary documentation, evidenced through Alle Becket’s scholarship, as well as the extensive notes in the back. For the Berry detractors in the group though, the insertion of fictionalized primary sources into the text was problematic, and broke the momentum of the narrative.

In the end, it seemed that, this example of Steve Berry’s work simply did not resonate enough to create new fans in the group. Meanwhile, his Cotton Malone series continues to entertain and draw in new readers. And for those readers who were fortunate enough to attend his recent talk at the library, Berry’s warmth and enthusiasm certainly won them over.

This list is composed of books mentioned by Berry in his Writer’s Note included at the end of the 2013 mass market paperback edition from Ballantine Books. Some of these items are available through the Merrimack Valley Library Consortium; others are available through libraries in other parts of the state and can be requested:

Here are links to the titles in the Cotton Malone series by Steve Berry:

This is a small list of other titles that you may enjoy if you liked reading The Columbus Affair: