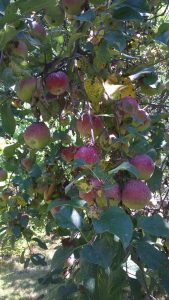 ……you make applesauce, apple butter, apple chutney, dried apples, apple tart, and apple crisp.  You show up at work with bags of apples for your unsuspecting colleagues, and you leave crates of apples at the doors of your friends’ homes.  And you’re thrilled when the food pantry says yes, they do accept fresh fruit.  This is life in September when you’ve been blessed with an abundant apple harvest.  We have four apple trees in our backyard, and this year there’s been a plethora of apples….a bonanza of apples….an avalanche of apples…..well, you get the idea!  Instead of spending the warm, waning days of summer walking in the woods or even just reading a book on the back porch, we are holed up in our kitchen attempting to process the bounty that Mother Nature has bestowed.  Now don’t get me wrong—it is fabulous to have these lovely raw materials, but it’s become a little too much of a good thing.

Our primary product this year is, as always, applesauce.  Most of it I freeze; some of it I preserve.  Applesauce is easy to make and has the virtue of using a goodly amount of apples.  I always thought applesauce was boring and tasteless until I started making my own.  Smooth and rich, intensely apple-y and lip-smackingly delicious, homemade applesauce is autumn in a bowl.  It can also be endlessly varied with different (or no) sweeteners, spices, and textures (smooth or chunky).  You can also cook down your applesauce into apple butter, a tart and tasty spread that can be spread on just about anything, or used to make a glaze for chicken or pork. 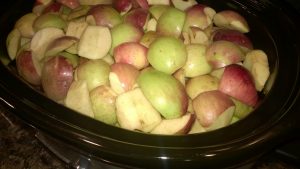 This year, for the first time, I tried making applesauce in my slow cooker.  While it doesn’t have the capacity of my largest pot, it does have the virtue of not needing much attention during the cooking process.  I load up the cooker with cored, quartered apples, crank it up to “high” and let it cook for around 4 hours, stirring every hour or so.  By then the apples have broken down into a chunky mass, but aren’t fully cooked. 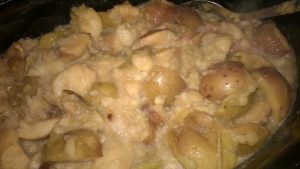 So the next step is to partially uncover the pot and let it cook further while evaporating some of the liquid.  This can take another 5 or 6 hours; but again, it requires little attention from me.  When I think it’s thick enough, I run it through my ancient food mill (inherited from my mother-in-law), and add sweetener if I feel so inclined. 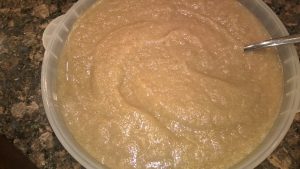 It’s true you have to be kind of hanging around to keep one eye on the pot, but as I’ve already mentioned, I’m pretty much chained to my stove and sink dealing with apples; so the slow cooker method is convenient for me.

Several years ago we bought a dehydrator to help us in our quest to preserve the harvest, and this year it’s been running pretty much nonstop.  Dried apples are always welcome in granola or cookies or muffins.  They also feature in a fantastic pie that I love to make at Thanksgiving.  My sister gave me this recipe, which I believe is of Pennsylvania Dutch origin:

My husband, the chief orchardist, also likes to make what he calls “apple chips.”  After dehydrating, he crisps the apple slices in a low oven.  They make fairly addictive snacks and are especially yummy with cheese.  Not to mention they keep well for months. 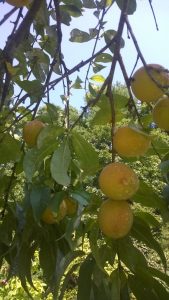 This year our lone peach tree has, for the first time, produced significant numbers of peaches.  The dehydrator’s been a big help here, too.  We’re still learning the ins and outs of drying peaches but so far we’ve at least produced something edible.  It’s a lot harder to get nice, even slices from a peach than from an apple, but I’m sure we’ll eventually work out a system.  I’ve also made a few batches of peach butter (this time using my oven) which beautifully concentrates that sweet, peachy flavor.  And it uses up a lot of peaches!  The recipe I used comes from Food in Jars, a popular book by blogger Marisa McLellan.  And, I’ve made one batch of peach salsa and plan to make  more; a coworker gave me a flavorful, not-too-spicy recipe from the Ball Complete Book of Home Preserving.  The instructions call for a fair amount of chopping, but once that’s done the rest is quick and easy.   And we certainly enjoy consuming the result with chips, as a sauce for chicken, or in pork tacos.

As some of you know, I work in the children’s room at the library.  There’s a classic picture book called Millions of Cats (written in 1928) which has a rhythmic refrain that I often find myself thinking of as I wash yet another overflowing sinkful of apples.  With apologies to author Wanda Gag, I have “…Hundreds of apples/Thousands of apples/Millions and billions and trillions of apples!” 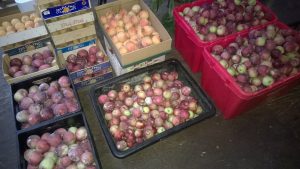