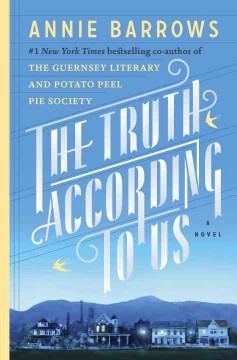 This month, a smaller than usual gathering of the Morning Book Group discussed Annie Barrow’s The Truth According to Us. Overwhelmingly, we liked it – the writing, the well-drawn characters, even the descriptions of the stifling heat of fictional Macedonia, WV. The story moved us along, although a couple of us thought it could have been a little shorter.

The book is populated by quite a cast of funny characters who form a tight, supportive family, albeit with a few dysfunctions. Jottie Romeyn is the mother figure to her siblings, and a maternal replacement for her two young nieces, Willa and Bird. She is the glue that holds the family together, to the point of not having a life of her own to speak of. Willa is one of the main voices in the book, telling the story from her 12-year-old viewpoint, and learning the truth about human nature along the way. Felix is the oldest brother, and father to Willa and Bird. He is the black sheep of the family, being both the family’s financial support and the source of the town’s disapproval. Rounding out the family are twins (and part-time wives) Minerva and Mae, and youngest sibling, the earnest history teacher Emmett. The Romeyns were once one of the leading families in town, their father being the beloved owner and operator of the town’s biggest employer, a hosiery factory. Then a terrible fire (and the attendant scandal) destroyed the mill and the fortunes of the family.

Inserted into the group is Layla Beck, the beautiful, banished daughter of a senator who is trying to teach her a lesson about loyalty to the family who supports her. She is now earning her keep as a writer in the WPA program, researching a town history of Macedonia, and disturbing the status quo among the family as she boards with them.

We were incensed by the character of Felix, a delinquent in childhood and a man of questionable morals as an adult. As a father, he is little more than a provider of ill-gotten income, often absent for days at a time, yet his daughters adore him. Willa, suspecting that her father is not as upstanding as she’s been led to believe, is anxious to learn the truth about him and the world of adults around her. Although we may not like the truth when it becomes clear, we agree that it is better, ultimately, to know it.

We talked about the nature of truth, agreeing that it is a moving target, and that even our own personal truth can change as we mature and experience the world. Some basic things about our natures always remain the same, but people can change, except Felix, who will always be no good. Layla changes, learning that one should know more about people before making judgements. And lastly, Jottie learns that she doesn’t have to subjugate her life to her overbearing brother, or to anyone. We believe that she will be more independent in the future, although some still have their doubts that much will change.

In July, we’ll choose our books for the next year, so bring a title to suggest and join us in the Fireplace Room, July 20th, 10am.