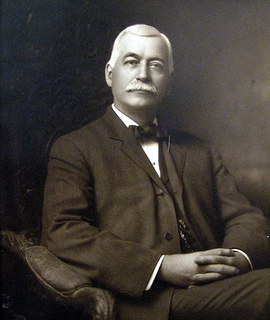 The original portion of the existing Chelmsford Library in Chelmsford Center was built in 1894. Mr. Amos F. Adams donated $30,000 to build the library itself, and later another $10,000 for library maintenance and operating costs. In gratitude for this gift, the building was called The Adams Library. It was built on land donated by Mr. J. Adams Bartlett, and Captain C. E. A. Bartlett bore the expense of grading it.

Amos Francis Adams was born May 26, 1842, to Charles and Nancy (Robbins) Adams, and raised on their farm in South Chelmsford. He attended the local district school (District #5), and later the Appleton Academy in New Ipswich. At age 20, Amos left Chelmsford to make his fortune in the mercantile industry in Quincy Market in Boston, eventually rising to be senior member of the firm of Adams, Chapman & Co., 37 North Market Street, Boston. He built a home for himself and his wife Alice (Wellington) in Newton, MA, where he lived until his death on January 4th, 1911.

Construction on the new library was begun in 1894, and the building was dedicated, as the Adams Library, in 1895. Amos delivered the following speech for the event on May 8, 1895, which shows his dedication both to education and literacy, and his hometown:

Mr. Chairman: Permit me to present, through you, to the town of Chelmsford, the keys of this public library building.

I ask you to accept the gift of this building as a token of my respect and love for this my native town. I ask you to guard it well, and permit it to serve its purpose for all, at all times, under proper management, and without restriction of thought or subject in the field of knowledge. 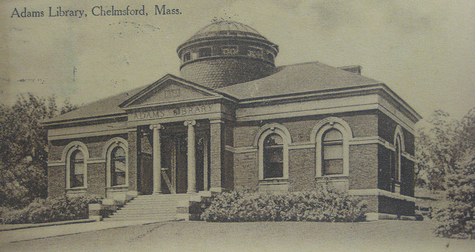 I remember well the days that I spent here while a boy upon my father’s farm; the limited opportunities for reading that I had, and the meager facilities for instruction that the common schools afforded in those days. I have watched with a great deal of interest, the boys and girls of those days grow up to manhood and womanhood, and the measure of success that has attended their efforts in later years.

If in those days there had been a public library in this town, I believe many of us might have been better and stronger men and women today.

And I present this building to you today, that in the future no child shall be permitted to grow up here without full and proper facilities to read and learn the history and events that have transpired not only in this our own beloved country, but in the great world about us. Education and knowledge are the foundation stones upon which our republic rests for future safety and prosperity; and today I am willing, in my humble way, to make that foundation stronger and more secure, by the erection of this building. I have come back here to Chelmsford, my native town, to perform that labor, where, I know, the citizens will enjoy it and value its worth.

Mr. Chairman, I still hold a deep feeling of love and respect for this town and its people. Their record is a worthy one. I am proud of the town’s history and proud of the fact that here I was born and here I grew to manhood.

I have often thought of this place where my ancestors lie buried, and the beautiful hills and valleys about which cluster all the bright and pleasant memories of my youth. With these feelings I have always desired to do something for this town, and I now present the keys of this building to you, not from any hope of praise, but rather with true feeling of gratitude and respect that the obedient child has for his parent.

In his personal life, Amos was said to be “well-built and handsome,” as well as “generous and affable.” He enjoyed outdoor activities, especially hunting, and sometimes went to the West with gun and dogs on a hunting trip. 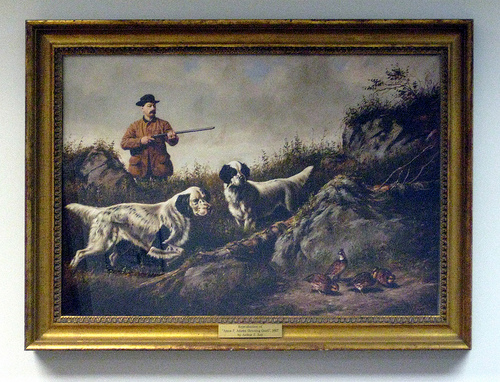 To commemorate his love of the outdoors, Amos commissioned American artist Arthur Fitzwilliam Tait to paint Amos F. Adams Shooting Over Gus Bondher and Son, Count Bondher, a hunting scene that features Amos and two of his prized hunting dogs. The painting was left to library, where it was rediscovered in 1985 and initially valued by Sotheby’s Auction House at approximately $150,000.

In 1993, the painting was sold through Christie’s auction house to a private individual for $120,000, which helped fund the modern addition to the original Adams Library building. The addition was necessary for the library to continue to meet Amos’ goal of providing “full and proper facilities to read and learn” for the people of Chelmsford.

A reproduction of the painting now hangs in the Conference Room on the Lower Level of the library. A large portrait of Amos Adams (shown above), also hangs in a position of prominence in the original Adams Library Reading Room.