One Book Chelmsford is a community-wide reading program encouraging all residents to read a selected title and attend programming related to the book.  The title is selected each Fall and the Library provides free copies to share. Related programs typically start early in the calendar year and often include a visit from the author. The library has been offering this program since 2007.

All through October, you voted and we listened! Next year we’ll be reading On Earth We’re Briefly Gorgeous, the debut novel by Vietnamese-American poet Ocean Vuong! Published in 2019 to wide acclaim, it was a finalist for the National Book Award and chosen by the Washington Post as one of its top ten books of the year.

We have copies of the book available, and we’ll announce related events as soon as we finalize dates and times!

The library will host a virtual conversation with Ocean Vuong and prize-winning poet, Professor Sandra Lim of UMass Lowell on Thursday, May 26 at 7:00 pm. Register now! 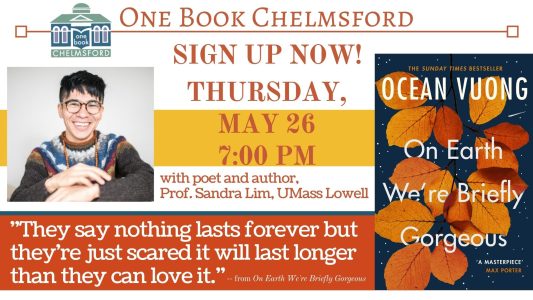 Join us for other One Book events during April and May!

Your Finalists were:
Read more about the selections, here.

This year, the One Book programs are funded by:

Past One Book Selections