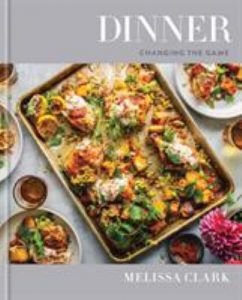 Even for those of us who enjoy cooking, making dinner every night can be a bit of a slog.   You want to eat something interesting– but nothing too complicated because it’s a weeknight.  And the recipe better use ingredients you already have in the house, because who in their right mind would go to a grocery store at 5 PM?  Also it should be reasonably quick, and preferably with a streamlined cooking method that won’t have you dirtying three pots and five bowls, because dish-washing is definitely less fun than cooking.  And of course it must taste fabulous; bonus points if it creates leftovers that everyone fights over for lunch.  All of the above requirements might seem like a tall order; but when you consider the number of cookbooks devoted to the evening meal, it seems that cookbook authors are up for the challenge.

Which bring us to this month’s title, Melissa Clark’s Dinner: Changing the Game.  Ms. Clark, a NY Times columnist and the author of several well-received cookbooks, maintains that not only can she change our dinner game, she can improve upon it– considerably!  That’s a claim our group was happy to put to the test.

We definitely gave the author points for the design of the book; there were plenty of outstanding full-page photos, and almost all the recipes fit on one page.  The book has that size that now seems to be the new standard: about the size of a sheet of paper (I got curious and actually measured the book: it’s 8 1/4″ by 10 1/4″).   Lately we’ve noticed that some books have headnotes that are, shall we say, extensive; this title was praised for its helpful and not overly verbose intros.   So, things were literally looking good; but how did it go when we were staring down the stove at 6 PM?

As always, chicken dishes were a popular choice to try; both sesame chicken with cashews and dates and Vietnamese ginger chicken were praised for being easy and tasty.  Thai chicken breasts and mustard chicken breasts also earned thumbs up; the mustard chicken had an assertive tangerine flavor that was particularly enjoyable.   Pizza chicken, despite its enticing name, was “just OK;” it needed to have more of a sauce than it did.   We made a fair amount of seafood, as well: Vietnamese caramel salmon was loaded with pungent umami, and the shrimp pad thai was a pleasantly vegetable-centric version of this classic dish.  But fish tacos were “blah” and needed more spice.  The coleslaw that went with it was delicious, though!

Other meaty mains we made included the excellent and easy

marmalade meatballs, and a “really good” lamb stew.  Pork scallopini were perfectly accented by the traditional apples; the cook confessed she didn’t use the called-for anchovies, which might have altered the overall flavor profile a bit!  But Georgian lamb kebabs were a disappointment, as the spice combination did not appeal, and the dill sauce was more relish than sauce.  Interestingly, the photo of this recipe does show a chopped relish, but the text calls it “dill sauce.”

Many of us were pleased to discover that this title featured plenty of vegetarian options, in several categories!  Winners included the sweet potato dhal, which was “solidly good.”  Though it wasn’t authentic, it was a lot speedier to make than the traditional version, so it was a worthwhile trade-off for a weeknight meal.  Black bean skillet dinner was a good combination, but what really put it over the top were the flavor-packed garnishes of pickled red onions and lime crema.  The Farro and crispy leeks recipe was likewise easy and tasty, and it made a lot– nice for leftovers.  Two styles of fritters were also hits: the zucchini-cornmeal cakes and the fresh corn cakes.  While these were designed as dinner entrees, they would make lovely appetizers as well.  Fried halloumi with spicy brussels sprouts was an unexpectedly delicious combination; on the downside, halloumi is quite pricey, and adding the halloumi to a hot skillet caused it to spit all over the place!  Curried lentils had an amazingly enticing flavor that only improved with age;

A few flops in this category included asparagus carbonara, which turned out to be “asparagus with scrambled eggs,” not necessarily a bad thing but maybe not what the cook intended!  However, “it tasted great!”   Stovetop fusilli with spinach, peas, and gruyere also did not turn out as advertised; though the recipe promised a dish with creamy sauce, the gruyere melted into a rubbery, stringy mass laced with spinach that then had to be chopped into bits in order to eat it.   Also in cheese mode, gruyere frittata was “kind of bland” and not as substantial as frittatas typically are; it “needed something– maybe bacon?  Potatoes?” 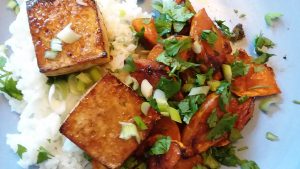 Maple-roasted tofu had a really yummy marinade; unfortunately the marinade never really penetrated the tofu and it tasted a bit too much like plain tofu.  But the marinade was wonderful on the squash.

Our overall impression of this book was one of weighing lots of pluses with plenty of minuses.  On the plus side, many of the dishes were quick, tasty, and a cut above the ordinary– which is the author’s stated goal.   However, since this book is pitched as a weeknight solution, we thought that goal wasn’t always attained.   A significant number of recipes had long lists of ingredients, or called for things we didn’t have or weren’t easy to find, or were expensive.  There were lots of interesting dipping sauces and garnishes, but these added to prep and cooking time, which could be a negative on a work day.   We also noted that Ms. Clark used a few ingredients a bit too regularly, among them fresh sage and lentils.  She also relies extensively on fresh herbs– not a bad thing, but something that doesn’t keep that well and that you are therefore not likely to have hanging around in your fridge.  And, as mentioned before, we might prefer to avoid the post-work grocery run!   Ms. Clark also states that most recipes are a one-dish solution, but we didn’t find that to be true as much as we would have liked.  Recipe timing also came in for some criticism; it turns out that the “total time” listed in the recipe is time after all prep is complete!

Once again our voting reflected our yin and yang: we averaged out to a 3.2 (out of a possible 5).  Two people liked the book enough that they would buy it, but “only at a discount!”  Perhaps that sums it up best!

Join us at our next meeting, Friday May 31 at 11 AM in the Fireplace Room, when we’ll discuss Dinner Part 2: Sara Moulton’s Home Cooking 101: How to Make Everything Taste Better.  Copies are available at the main desk.  Hope to see you there!