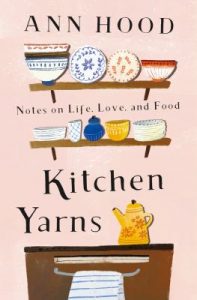 The curse and the blessing of memory is just that: sometimes we remember things we’d rather forget, and we forget things we’d rather remember.  This paradox makes the memoir format an imperfect one, yet it can give us a completely clear picture of someone at a particular point in their lives, or in a particular place with particular people.  In January, Bibliobites explored the vagaries of memory (and its associated recipes!) with Chelmsford’s One Book title, Ann Hood’s Kitchen Yarns.  Most of us thoroughly enjoyed this revealing peek into Ms. Hood’s life; her affectionate and heartfelt tales had aspects to which we could all relate. Several in the group particularly enjoyed the stories that featured Mama Rose (Ms. Hood’s nonna), as they had fond memories of their own grandmothers constantly producing massive quantities of yummy food.  And all of us could recall the anxieties of being a teenager, embarking upon our first real grownup job, falling in love, or losing someone we love.    The local angle appealed to many as well; we enjoyed reading about (for example) Jordan Marsh in its heyday at Downtown Crossing.  There were a few complaints about the essay format; sometimes the stories seemed repetitive and covered overly-familiar ground.   Many of the chapters in this book were previously published as standalone articles, and therefore included some basic details about family members.  These details weren’t edited out in any of the book’s essays, so if you read the whole thing cover to cover, you might find the same bit in multiple chapters.  On the plus side, if you wanted to dip into the book at random points, you’d never be left wondering (for instance) who Sam was.

Among the recipes we tried, my roast chicken was a hit, stuffed with garlic and fragrant fresh rosemary.  The classic chicken Marbella also drew praise, but had “too much oregano.”  Two of us were intrigued by 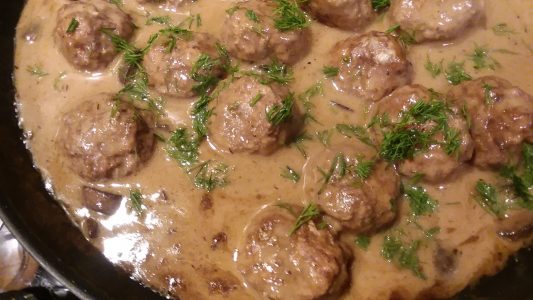 Gogo’s Swedish meatballs with Ikea gravy, which was overall a winning combination; we loved the allspice in the meatballs.  One person thought the gravy was a bit thin and “needed something,” but the recipe is a keeper anyway!  On the other hand, Gogo’s meatballs were good but “not as good as other versions I’ve made.”  Never-fail soufflé “looked fantastic” but had an odd, starchy mouthfeel; it was also a bit plain and needed something to give it oomph—spice? Or some sautéed veggies?  One person baked the much-revered and fondly remembered Jordan Marsh blueberry muffins.  These were solidly good with a nice texture and plenty of blueberry flavor.  Unfortunately it’s not easy to compare these to the real thing, though it is possible; apparently Jordan’s Furniture in Avon features the muffins at Christmastime, along with the iconic Enchanted Village!  And everyone was quite keen to make Laurie Colwin’s tomato pie, which sounded positively scrumptious—but sadly we’ll have to wait until August, when we can have truly ripe tomatoes!

Our overall opinions on this title were, as always, quite varied.  It was “a fun read” or “just OK.”  And, “I don’t like memoir but this was better than expected.”  This title made me think a lot about how cooking can be a form of storytelling.  Food itself is evanescent—we eat it and then it’s gone; but the traditions surrounding food and its preparation mean that we can re-create a moment or a feeling anytime.  A recipe tells a story about time, place, family, friends; it’s a memory waiting to be shared now and in the future.  This idea is something we often instinctively feel but don’t consciously express, and perhaps that’s part of what makes Ms. Hood’s type of memoir so appealing.  And appeal it did—our voting averaged out to a 3.75, out of a possible 5.  After reading this book, we’re all looking forward to Ms. Hood’s visit to the Chelmsford Library on Thursday, March 19 at 7:00 PM.  Please register online for this special event. 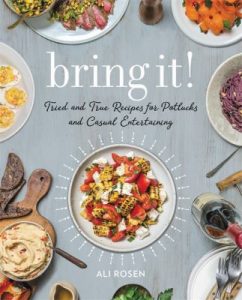 Much more cooking ensued when we moved on to January’s second title, Bring It! By Ali Rosen.  The subtitle of this book explains it well: tried and true recipes for potlucks and casual entertaining.  Our group was already gearing up for the One Book community potluck on April 4. This title proved to be a fun read; most of us marked several recipes that sounded intriguing and quite doable.  Lots of luscious photos were an additional enticement!  The typeface was easy to read, and pages featured plenty of nicely organized white space.  This book is a bit smaller than the prevalent “full sheet of paper” size; it’s about 2” shorter and 1” narrower, but still seemed large enough that many recipes could fit on one page.  Ms. Rosen’s chapters make their way through a full meal, from appetizers to desserts; there’s also a helpful section on how to tote your dish to a potluck (and some recipes also had specific instructions on how to do that).

In the kitchen, let’s start with some salads: pear, arugula, and goat cheese salad was “so good” with its bright lemon zest garnish, and orange, parsley and walnut salad was equally refreshing and delicious.  Supreming the oranges (removing the skin from the individual segments) was “too time consuming” but other than that it was easy to put together.  Though it featured plenty of endive and parsley, it wasn’t bitter.  Kale salad with carrot ginger dressing had a more complicated than average dressing, but the result was a good one; and this salad would be perfect to make in advance for a potluck, as kale holds up well in the fridge.  As for cooked vegetables, the baked onion was that simple, perfect combination of “really good and really easy!”  Three people zeroed in on mustard roasted carrots, 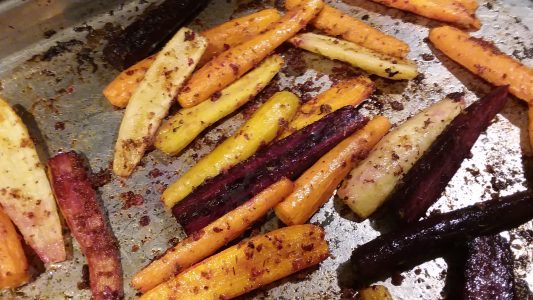 which were likewise easy to prepare with tasty results.  Acorn squash with Parmesan and hazelnuts was a nice combination with its tart note of lemon, but “I still prefer squash with brown sugar or maple syrup.”

Along with the veggies, we tried a couple of grain-based sides.  Two people made scallion quinoa which was “very good” with some caveats: the recipe calls for putting in frozen peas at the beginning of the cooking time, so they were mushy and an unappealingly olive shade when all was done; and the quinoa took much longer to cook than usual as the frozen peas cooled off the cooking liquid!  It’s a good vegetarian option but needs some tweaks.  Couscous with peas and onions needed a higher proportion of couscous to veggies; overall the flavors were just “OK,” though the feta and lemon in it were tasty.

There’s a full chapter devoted to casseroles and tarts; two people made the classic baked chicken and pasta casserole.  This made a bounteous panful (“you’ll need a big bowl!”) and was a good rendition of a familiar dish that “I would make again.”  Bacon mushroom quiche had a nice, crisp crust (due to blind-baking before filling), but overall it was “not spectacular—but good.”  However, broccoli and almond quiche was a bit more intriguing with its feta cheese, nuts and cayenne.  Spicy Brussels sprouts tart was likewise a less-traditional take on a tart that proved highly successful, “really good—would definitely make again.”

Moving on to meatier mains, two people tried chicken with rosemary and mustard, with uneven results.  One person didn’t feel that brining helped any, and in fact made the dish too salty.  Plus, “the flavor was kind of boring.”  Another thought the flavor was “delicious” and the texture nicely moist; but the marinade burned in the pan, making quite a mess.  Short ribs with quick pickled shallots was a bit fussy to put together, but the result was worth the effort.  It was “very flavorful, and the pickled shallots were excellent.”  The shallots nicely balanced out a fairly heavy, rich dish.  One brave soul attempted the complex seafood paella-ish (“I didn’t use the octopus!”).  As is typical of this dish, there was a lengthy prep time, with plenty of chopping; but it makes a lot and “ages well.”  A great project for a winter afternoon.  Two people made 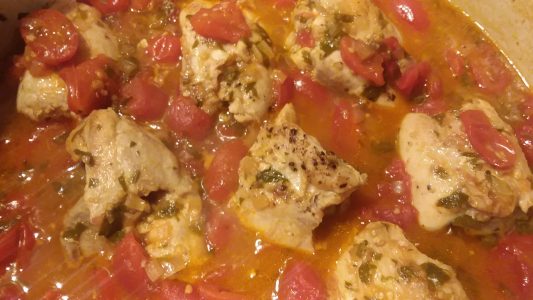 vinegar chicken with tomatoes; this simple combination drew praise for its moist chicken and balanced vinegar flavor.  And the tarragon was “the best!”  Tahini lamb and rice promised unique flavor with its middle eastern spices, but the result was unfortunately “kind of boring.”

Oddly enough, only  one person made dessert, the chocolate and walnut rice krispies bars, which were a hit at our meeting.  The chocolate cut through the sweetness of the marshmallow, which turned the bars into a much more enjoyable treat for grownups.  Easy and good!

On the whole, this book was a hit with our group, and a few people planned to buy it.  We liked that (octopus aside) most of the recipes featured ingredients that were easy to find, or that we were likely to have on hand.  And most dishes involved moderate effort for a tasty result, always an appealing trait!  There were, of course, a few complaints: several people noted that some recipes didn’t give the size of a baking dish, which could be important for a dessert.  We also questioned whether some dishes really were portable (those with lots of sauce), or would be easy to serve at a potluck (the food was prepared in large pieces).  But despite these caveats, this was an approachable and enjoyable title for most.  From all this positivity, you might expect a very high rating, but we averaged out to a 3.3 out of a possible 5.  Still a solid score!

We’ll next meet on Friday, February 28 at 11 AM in the Fireplace Room, when we’ll be discussing our second One Book title, Lucy Knisley’s comic-format memoir, Relish.  Ms. Knisley will be visiting the Chelmsford Library on Sunday, March 1 at 2 PM (please register online); come to our meeting for a preview.  All are welcome!

Sent from Mail for Windows 10