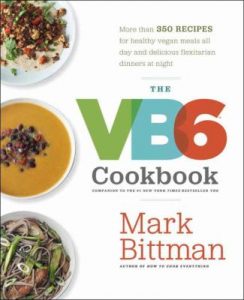 When you hear the word “vegan,” what comes to mind?  Do you picture that old stereotype of an aging hippie hunched over a bowl of brown rice and vegetables?  Or do you imagine Brooklyn hipsters  scarfing down kale chips at a trendy bistro?  Maybe it’s Tom Brady you think of, who credits an almost-vegan diet with being one of the keys to his playing longevity.  Or perhaps you know someone who’s ethically opposed to eating animals in any form; or you have a  friend, neighbor, or sibling who’s committed to a plant-based diet because of health or environmental concerns.  While being a vegan isn’t quite a mainstream choice, it’s no longer “out there” as it was even five years ago.  For evidence of this burgeoning trend, look no further than the library’s catalog, which lists 67 titles about vegan cooking!  This month, our group experimented with the world of meat- and dairy-free cooking with two titles: The VB6 Cookbook by the prolific Mark Bittman, and The Oh She Glows Cookbook by blogger Angela Liddon. 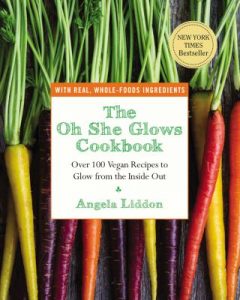 To begin our meeting, I asked everyone to describe the month’s experiences with one word.  As always, opinions were forthright and varied wildly: “unsatisfying;” “boring;” “interesting;” “just….no;” “healthy;” “unappetizing;” “surprising;” and “surprisingly good.”  Those strongly in the negative fell into a few camps: some do not like beans, or live with those who refuse to eat them.  Others could not fathom purposely eliminating the “good stuff,” like cheese or meat; and some have dietary restrictions that already complicate meal planning, so adding the changes veganism requires is difficult or not advisable.  But despite misgivings, most people persevered, and some discovered recipes that they’d be happy to include in their regular rotation.

Bittman’s book addresses some concerns regarding giving up favorite foods with his VB6 diet plan, in which participants are vegan-only before 6 PM, but eat omnivorously for dinner.  Accordingly, the book has recipes of both types; but in general no one was impressed with this title.  Orange soup with black salsa was “OK,” though the vegetable stock used in it was quite good.  Both the African-style chicken stew and red paella with scallops didn’t seem to have enough seasoning and were “bland,” and ham hash with greens similarly lacked oomph.

Spaghetti with bean Bolognese had an appropriately thick sauce, and overall was an enjoyable dish; but the cauliflower Romesco was just “OK,” while the eggplant meatballs were not a hit.  They held together well but the proportion of breadcrumbs was too high, and were therefore over-evident in the final dish.  The meatballs were served with all-purpose tomato sauce, which was “good,” but nothing out of the ordinary.  The ribollita soup, a traditional Tuscan dish, was “really good,” and the sweet potato shepherd’s pie was a tasty version of this classic casserole.

Chorizo tacos featured tofu subbing for the sausage; it was better than expected but “not a keeper.”  Banana-chocolate ice cream was much better than expected, and was a creamy treat.  This dessert is based on frozen bananas; one tip mentioned was to peel the bananas before you freeze them, since it’s way more difficult to peel them once they’re frozen.  Also, this is one recipe for which you must have a food processor or a powerful blender.  You could top your ice cream with coco-oat-nut granola, which was good and easy to make.

Liddon’s  “Oh She Glows Cookbook” gets my vote for “worst name ever for a cookbook” (and blog for that matter), but obviously this doesn’t bother her legions of fans around the world.   There were hits and misses from this title as well, but those who used it were mostly pleasantly surprised by how much they enjoyed what they tried.  Maple-cinnamon apple & pear baked oatmeal made a delicious and hearty breakfast; it can be made ahead, always a plus.  Present glo bars were a no-bake granola bar that include puffed rice cereal, which makes for a lighter, crispier bar.  The bars were tasty but tended to fall apart once outside of the refrigerator, so they’re not as portable as you might hope.

10-spice vegetable soup with cashew cream, despite the enticing name, turned out to be your basic vegetable soup, but the Indian lentil-cauliflower soup was excellent, with a nice combination of spices.  You could accompany your soup with spiced toasted pita chips, which were flavorful and not overly spicy.   Lentil-walnut loaf was surprisingly delicious; it had a balsamic-apple glaze which seemed to have a weird combination of ingredients– but it turned out to be a perfect accent for the loaf.  Other keepers were the crowd-pleasing Tex-Mex casserole,

basically a vegan version of a taco casserole; and the soul-soothing African peanut stew (note to Mark Bittman: this one is really good!).

Liddon has a newer book as well, Oh She Glows Every Day, and one person tried it out.  Again, there were some recipes that missed the mark; but there was still a lot to like.  The fastest sprouted steel-cut oatmeal was a make-ahead breakfast; similar to other “overnight oats” recipes, you soak your oats overnight to speed up the morning’s cooking.  We’re not sure if this is really sprouting your oats, but it’s a good technique anyway.  The berry chia seed jam was a clever use of the thickening power of these seeds, and was a quick way to make a small batch of jam.  The jam came in handy for the strawberry oat crumble bars, which were “surprisingly good.”   Chia seeds also came into play in coconut chia seed pudding, but in this case the result was “yuck!”  The texture of the chia seeds in this recipe was unpleasant and overwhelming.  And though the lemon-tahini dressing wasn’t enjoyable, the Thai almond butter sauce was addictive– as advertised!

Creamy Thai carrot sweet potato soup was flavorful, but what really made this dish was its garnish of salty, crunchy roasted tamari almonds.  One general complaint about the book’s salad recipes is that they frequently feature several ingredients that require advance prep; if you like this type of cooking (and have the time) it works well, but it’s not so good when you’re looking for a last-minute meal.

Overall, group members felt that this type of cooking required lots of ingredients that were difficult to find and/or were expensive.  Many didn’t like that plant-based cooking often requires planning ahead, as in making sure you have cooked grains, beans, or veggies at the ready– otherwise dinner could easily take more than an hour to assemble.  Breakfast was difficult for some; both books tout smoothies as a fast breakfast option, but if you like a bit of chew in the morning that’s not going to work for you.  Oatmeal in its many forms is a good option, but that’s another breakfast choice that has strong proponents and detractors!  Lunch also could get more complicated than expected– sandwich fillings (with the exception of the ever-reliable PB&J) required some forethought and prep, as do the aforementioned salads.  Dinner leftovers are probably your best option; but for some this meant consuming more beans and grains than they really wanted to.

What plant-based cooking may come down to for most of us is that we need a strong reason to make this labor-intensive switch.  As Mark Bittman points out, his choice was either to change his diet or accept a lifetime of medication.  That’s pretty good motivation, and one that’s obviously worked for him.  Angela Liddon  felt that a plant-based, whole-foods diet aided in her recovery from an eating disorder; and others (most notably Rip Esselstyn of Engine 2 fame) credit this way of eating with improving their overall health and sharply reducing their risk of cardiovascular disease.  Those in our group who significantly altered their eating patterns for the month didn’t report feeling much different or better  in any way– but you might expect that those in a group interested in cooking probably eat fairly well already.   It’s worth pointing out that many common dishes are intrinsically vegan– we just don’t think of them that way, because they’re familiar.  Whether we realize it or not, many of us are already part-time vegans!

As for the books themselves, both were large-format, which enabled them to (mostly) stay open when cooking.  Bittman’s book has more photos than some of his other books, which was a plus.  In his typical fashion, at the end of a recipe he provides a couple of variations, as well as alternative ingredients.  Some really appreciate this feature; others find it overwhelming and distracting.  We’ll give him points for thoroughness, though!

Liddon’s book has full-page photos of almost every recipe, but the photos were criticized for being “gelatinous;” they had a shiny, almost fake look that we didn’t care for, though some were better than others.  There are also numerous photos of the photogenic author and her family, which fans of her blog probably adore, but which got to be a bit much for the rest of us.  Many people commented negatively on the excessive “perkiness” of her headnotes, and the writing itself seemed a bit awkward; perhaps her editors were reluctant to alter her “voice” with which so many are familiar.  But, overall her recipes were more interesting and engaging than Bittman’s.  Points to her for that!

Speaking of points….in our final voting, VB6 averaged out to 2 chef’s hats (out of a possible 5); while Oh She Glows barely squeaked in to a 3.  Ouch!  Clearly neither book converted anyone in the group to a plant-based diet. 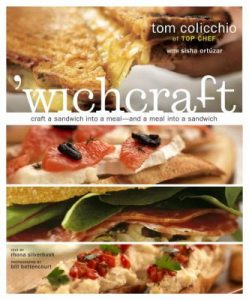 We’ll next meet on February 23 at 11 AM in the Fireplace Room.  We’ll be living life between two slices of bread with Top Chef‘s Tom Colicchio’s ‘wichcraft.  Copies are available at the main desk.  Hope to see you there!

Postscript:  If you’ve read all of the above, you may be wondering about the two terms I’ve used: “plant-based diet” versus “vegan.”  Initially I thought they were the same thing, but a comment I overheard made me wonder if they were.  A quick, and admittedly unscientific, internet search revealed the following: a plant-based diet (sometimes also called a whole-foods plant-based diet) promotes consumption of whole grains, legumes, fruits, and vegetables for health-based reasons.  One can include small amounts of animal products, but the overriding emphasis is on plant-based, unprocessed foods.  Vegans consume only plant-based foods, and are also ethically committed to abstaining from using animal products in any aspects of their lives– for instance, vegans do not wear leather or wool sweaters.  Theoretically, vegans aren’t necessarily committed to a whole-foods approach (as many articles like to point out, Oreos and potato chips are vegan)– but this is likely more a matter of semantics than practical application.  And speaking of semantics, the two terms have come to be used somewhat interchangeably, though right now “vegan” seems to be the more common usage, if only because it’s quicker to say and is understood to be shorthand for “eating only plant-based foods.”  But there is a difference, and it will be interesting to see how this plays out in the coming years, especially if this type of eating continues to become more common.