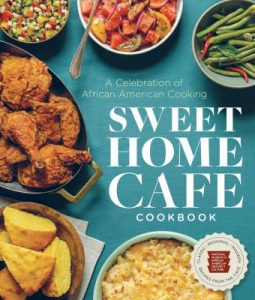 July 2020 will undoubtedly go down in the record books for its unending heat and humidity.  It was so hot that the majority of our Bibliobites group admitted that it was just too hot to cook!  But even if we couldn’t bear the idea of turning on the stove or standing in front of a hot grill, we could still escape into the world of food with books.  This month we may not have done a lot of cooking, but there was an amazing amount of reading going on.

This month’s theme was African-American cuisine, which as it turns out is a broad topic, encompassing mostly Southern food in all its regional variations, which in turn has its roots in the Caribbean and West Africa.  For our group of Northern cooks, many of the iconic dishes of the South are new-ish territory; so it was a big learning experience for all of us.  Most of the books we explored also provided copious amounts of history, and though we may have known the basics, we all came away with a deeper understanding of African-American culture, as seen through the lens of food.

Two people perused Sweet Home Cafe by Albert Lukas and Jessica Harris.  This book features recipes from the cafe at the National Museum of African-American History and Culture in Washington, DC.  As one person commented, “It’s a history lesson with recipes.”  There were some definite hits in this book: baby kale salad was “yummy” with its abundance of tomatoes, corn, scallions, and chives.  The buttermilk dressing was a perfect topper.  Jamaican jerk chicken was nicely spicy with hits of ginger and cinnamon, and sparkling watermelon and lemon verbena was a cooling, fruity drink, though a bit too sweet.  However Frogmore stew, despite a stellar list of ingredients (sausage, shrimp, corn, potatoes) was disappointing– everything is boiled together with a lot of Old Bay seasoning, which our cook discovered she doesn’t like! 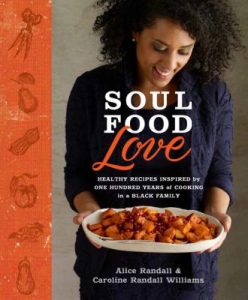 Soul Food Love by Alice Randall featured plenty of “typical” Southern ingredients, with a twist.  Red beans and Creole rice salad was (thankfully) served cold, with a “nice dressing;” this salad was definitely hearty enough for a meal and would be good to take to a potluck.  Fresh mint cucumber lime water was “basic but refreshing” and could also be made with sparkling water if you enjoy the bubbles.  And black-eyed pea hummus was “very creamy– the texture was like pate!” 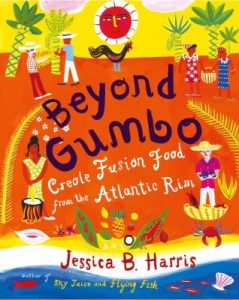 The  prolific Jessica Harris brought us Beyond Gumbo: Creole Fusion Food From the Atlantic Rim.  Though we associate Creole cooking with New Orleans, it’s been influenced by African and Caribbean flavors, and features many ingredients that appear in almost all Southern cookbooks.  For instance, seafood gumbo had lots of celery, onion, and garlic; but despite this common and tasty trio, the dish somehow “didn’t come together.”  Cuban black beans were flavored with bay leaf, peppers, and onions; this was a solid combination but not outstanding.  Chicken and andouille etouffee lost some points for requiring one cup of oil for the roux, which seemed excessive (even if it is traditional).  Overall it was a disappointing title, and to make matters a bit worse, the only illustrations were antique postcards– there were no pictures of the food.

Princess Pamela’s Soul Food Cookbook by Pamela Strobel is a 45-year old classic that is now back in print.  This title features classic African-American recipes like mixed greens (“I used kale and pancetta”) and hot Southern cabbage with a vinegar and sugar dressing.   Carla Hall, “Top Chef” alumnus,  has a new one out called Soul Food: Everyday and Celebration. 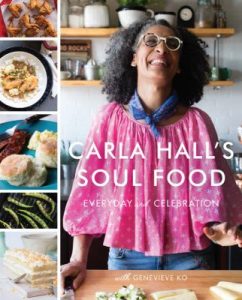 As was true of many books we test-drove this month, it includes backstories for the recipes along with family history.  One person tried the seared summer squash with sage; the squash is cooked long and slow until super-tender.  This was “OK…I don’t think I cooked the squash long enough.”  Interestingly there’s an audio version of this title, read by the author.  We were curious as to how that would work out for cooking purposes!

That was about the extent of our cooking adventures, but reading– wow!  There are so many great titles to tell you about, and when the weather cools off somewhat we’ll be able to try out many of the recipes we discovered.  Here’s a sampling:

The Jemima Code by Toni Tipton-Martin traces the history of African-American cooking through a century’s worth of cookbooks written by women; Thirty Years at the Mansion: Recipes and Recollections by Liza Ashley details the author’s experiences as cook in the Arkansas governor’s mansion.  The author provides favorite recipes of each governor, in addition to (politely)dishing the dirt on her employers, including Bill Clinton.  Unfortunately no MVLC library owns this title.  A Real Southern Cook

by Dora Charles showcases recipes from the Savannah area; Ms. Charles cooked at Paula Deen’s restaurant and they had a long and “complicated” working relationship.  She left Deen’s employ amid allegations of racism and has since worked to create her own legacy.  The New Lowcountry Cookbook by Marvin Woods (an older title no longer available through MVLC) features new takes on traditional foods of that area; and Southern Girl Meets Vegetarian Boy by Damaris Phillips uses classic Southern “core recipes,” and then modifies them for both vegetarians and vegans.

Many of the titles we read were either memoirs or a memoir/cookbook combination.  These were uniformly wonderfully written, heartfelt, and inspiring.  Check out:

Notes From a Young Black Chef by Kwame Onwuachi; The Cooking Gene

by Michael Twitty; and Yes Chef by Marcus Samuelsson.  Samuelsson also has a cookbook, The Red Rooster Cookbook, about his restaurant in Harlem; in addition to recipes, it’s a quasi-memoir about his journey to find a place to call home after decades of cooking all over the world.  All these memoirs have in common an immensely strong protagonist who never gave up on himself or his goals despite overt and abundant racism.  These chefs are possessed of an incredible work ethic and an enduring desire to bring what they know and love to the world.  We’re in awe of their persistence and energy.

August is the month of corn and tomatoes, so for our next meeting we have been perusing titles that feature vegetables in all their seasonal glory.  Choose a book from a selection at the main desk, or use a book you have at home.  We’ll meet via Zoom on Friday, August 28 at 11 AM.   If you would like to join us and aren’t already on our mailing list, please email program leader Andrea Grant at agrant@chelmsfordlibrary.org.  Hope to see you then!