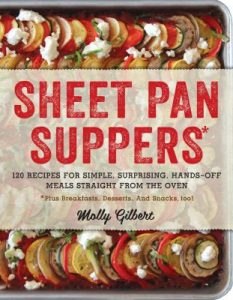 A common thread in many cookbooks both old and new is the promise of a made-from-scratch, quick and easy complete meal.  Our Bibliobites group has certainly covered this territory; earlier this year we test-drove Mark Bittman’s How to Cook Everything Fast and further back, we checked out the Fix It and Forget It New Cookbook and The Make-Ahead Cook.  Obviously any one of these titles have their pluses and minuses, but the lure of a fabulous yet speedy meal is a good “hook” for any cookbook!  This month’s title, Sheet Pan Suppers by Molly Gilbert, treads this familiar ground and promises us that that elusive dinner solution lies in your basic pedestrian sheet pan.

To be clear, let’s start with a definition: a sheet pan is nothing more than a large, rimmed metal pan approximately 18 x 13 inches, with sides usually about an inch high.  If you’re a baker, this pan size is really a half-sheet pan; but here we’re dealing mostly with dinner so we’re just going to call it a sheet pan.  Gilbert’s claim is that you can just pile a mess of ingredients on your pan, slip it in to the oven, and a tasty dinner will emerge in about 30 minutes.  Nirvana!  Can this really be true?  According to our group, the answer was mostly, and perhaps even resoundingly, yes.

As far as the book itself, it’s a paperback, but a pretty good-sized one; therefore it had that all-important quality of staying open when in use.  The heavy, glossy pages feature plenty of luscious photographs (now why is it, that food with charred edges always looks so scrumptious?), and many recipes are all on one page, or close to it.  Most people enjoyed the author’s chatty and informative headnotes, though a few thought that sometimes her writing got a little too “cute.”  Gilbert’s book contains appetizers, snacks, and desserts, though the bulk of the recipes concern main dishes.  It’s worth noting that this title was published in 2014, which means the recipes were being developed at least a year or more before that.  Today we think of roasting vegetables (and/or other ingredients) as basic, but when this book was created the technique was much less mainstream.  In fact, lately the phrase “sheet pan dinner” seems to have become a frequent description in magazine articles and on cooking shows, so this concept has certainly moved into the realm of the everyday.  As it should– since according to our group, roasting gives you a lot of bang for your buck.

Lots of sheet pans were being used, washed, and reused by the cooks in our group this past month.  Most people did focus on main dishes, but a few experimented with desserts or snacks.  One favorite was the quick chicken and baby broccoli with peanut sauce.  The sauce was addictive as described, and melded nicely with the chicken and broccoli.  Classic roast chicken with mustardy potatoes was a winner; in particular we enjoyed the combination of potatoes and Dijon mustard.  Other chicken recipes we approved were the 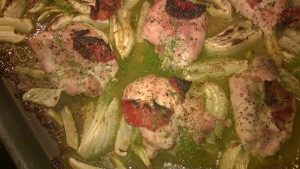 chicken legs with fennel and orange (“fantastic flavor combination”); chicken Jerome (“very easy and very good”) and the chicken Parmesan.  This last came in for some criticism; the recipe called for 2 tablespoons of sweet or smoked paprika, which was an overwhelming amount.  A misprint, perhaps?  Overall, though, it was a good dish and the recommended jarred sauce, Rao’s, turned out to be a happy discovery.

Other meaty mains we tried included

pork tenderloin with squash, apples, and onion which a few of us made and thought was a delicious and complete meal.  Chinese five spice pork chops with nectarines also had praiseworthy flavor, but the recipe had a couple of oddities: brining time was listed as 4 hours up to “overnight,” which could be as much as 12 hours and would be way too long; and the ingredient list included scallions which are never mentioned in the recipe.  A garnish?  With nectarines being out of season, apples and pears were substituted and worked just fine.  Rack of lamb with herby breadcrumbs and buttered carrots generated just one phrase: “loved it!”  This is undeniably a pricey splurge, but it sounded like it was worth it!   Bruce’s barbecue meatloaf and potatoes was good, but not any better than your average meatloaf recipe, and it called for “way too much” barbecue sauce: 1 1/2 cups in the loaf, and 1/2 cup on top! And finally,  although a bit less meat-centric, the apple, prosciutto, and radicchio pizza was excellent and easy to make.

Seafood also came in for the sheet pan treatment; we liked soy-mustard salmon and broccoli and orange-ginger salmon with lentils and green beans.  A couple of caveats emerged: 1) if your salmon fillets are bigger than the recipe calls for and therefore take a bit longer to cook, your broccoli will burn before the fish is done; and 2) canned lentils?  Many of us had never seen this item in the supermarket, though with a little research they were located.  In this latter recipe, the vegetables suffered from not being cooked enough when the fish was done.  Honey-orange shrimp with baby bok choy was easy and flavorful; the bok choy was tender and the orange sauce was a good complement.  It didn’t look quite as pretty as the picture in the book, though!  And

warm tuna Nicoise salad was a nice riff on the classic salad, with a yummy dressing coating loads of fresh-tasting veggies.

There’s also a chapter on meatless mains, and we tested a few recipes from that section as well.  Baked sweet potatoes with cannellinis and baby spinach was a complete meal; colorful, tasty, and satisfying.  The cute factor did come into play here: Gilbert tells you to stuff the cooked sweet potatoes with the bean filling, but this was almost impossible and just made a mess.  If it had worked it would indeed have looked cute, but it was far simpler  to cut up the potatoes and mix them with the other ingredients.

Lasagna’d hasselbeck potatoes suffered from a similar flaw; the potato is sort of stuffed with ricotta, mozzarella, and tomato sauce, but it was impossible to get enough filling into the potato.  It was a good combination, but needed some tweaking.  Roasted crisp-topped eggplant with chickpeas was “okay– it was missing something, and it seemed more like a side dish than a main.”  It was definitely crispy, though, and it did make a lot so you could play around with the leftovers and change it up a bit (if you were so inspired!).

Phew!  But wait, there’s more….crispy za’atar chickpeas were a tasty, satisfying snack, and made good use of some za’atar that had been languishing; and the herbed goat cheese and zucchini tart (which we sampled at our meeting) was both creamy and crispy….and delicious.

Let’s not forget dessert! Someone also brought in the Almond-cherry jam crostata which had a buttery shortbread crust topped with jam– a delectable combination that was quickly produced with the aid of the trusty sheet pan.

Apple galette was another pie-ish dessert that “looked really pretty and was delicious!”  The amount of sugar in the recipe seemed to be excessive, but it was simple enough to use less as the sugar was sprinkled on top of the apples.

As you might infer from the number of recipes made, this was a book with broad appeal, and it did seem to live up to its claims of creating a reasonably quick and tasty dinner solution.  Even if there’s significant prep involved, it was nice to know that once that pan was slid into the oven, dinner was essentially done.  And many people commented that her sauces and flavor combinations were interesting and varied, and could be used in other applications.

On the down side, this book came in for a common criticism of books that focus on a particular piece of cooking equipment: not everything is best made on a sheet pan, and you sometimes feel the author is trying a bit too hard to convince you that her way is the way.  So there were a few people who didn’t care for the concept of the book, even if they use a sheet pan now and then; but overall this book earned high marks from our notoriously skeptical group.  Six people planned to buy the book (which may be a new record!), and our voting averaged out to 4.25 chef’s hats (out of a possible 5).  Seven participants gave it a score of 5, which is also probably some kind of record for us.

There were a couple of pan recommendations if you want to try out sheet pan cooking, or need a new one:   check out the Bellemain pan or the Nordic Ware. Whatever you buy, be sure it’s heavy so it doesn’t warp in the oven, and can last through years of high heat roasting and broiling.

Our next meeting will be a combined November/December meeting on Friday, December 8 at 11 AM in the Fireplace Room.  Instead of a specific book, this month we’re asking everyone to choose a food magazine (new, old, yours, the library’s) and try it out.  Remember you can borrow print magazines from the library, and read online as well through the library’s Zinio app.

Have a wonderful Thanksgiving, and see you December 8!