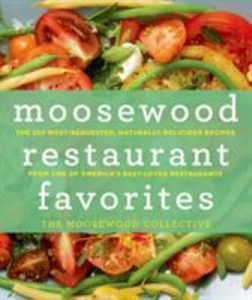 Anyone who remembers the 1970s will recall how food co-ops and “health food” restaurants popped up everywhere, seemingly overnight.  Suddenly vegetables and whole grains assumed a greater importance than they had ever had on American tables; and though being a vegetarian was still seen as a fringe choice, attitudes slowly started to shift.   Many first experienced this trend at a restaurant, and none illustrated it better than the Moosewood Restaurant in Ithaca, NY.  Founded by a group of owners in 1973, this restaurant’s influence continues even today.  Its reach has been amplified tremendously through more than a dozen cookbooks, the first of which was published in 1977, and the most recent in 2017.  Recently, our Bibliobites group tackled two of these titles: Moosewood Restaurant Favorites from 2013, and The Moosewood Restaurant Table from 2017.  Has Moosewood evolved along with the cuisine it has championed for more than four decades?  We hit the produce section big-time in order to answer that question! 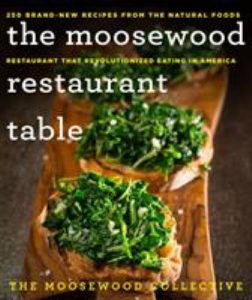 Both books (hereinafter referred to as RF and RT to save typing) garnered quite a bit of praise.  They’re both hefty tomes with recipes that run the gamut from appetizers to dessert.  RT has a separate “Breakfast” section, for those of you who are into brunch, as well as an on-trend “Bowls” chapter.  RF features a section on fish for those “vegetarians” who are really pescatarians, as well as a chapter devoted to the oft-maligned tofu.  Both books are nicely laid out with an easy to read typeface.  The photos were appealing, but we all wished for more of them– though more would likely have made the books impossibly unwieldy. 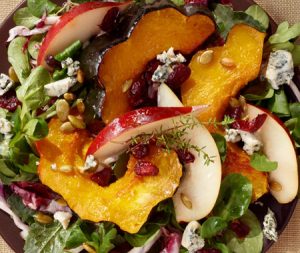 In the kitchen, we got busy!  All of the following are from the RF title. The autumn salad plate with its roasted squash, cheddar, and pears was “our favorite.”    Caribbean stew involved a lot of chopping to prep; it was good but “it had too much ginger for me.”  Another stew, our best chili, was “a keeper…the contrast of the sweet corn and the other spices was pleasing.”  Basque beans was also a winner, with its Spanish-inspired notes of saffron and sherry.  Since soup season was getting started, we made a few: Southwestern sweet potato-corn soup was colorful and tasty, but it was a little on the thin side and needed something to add body—maybe some butter?  Thai butternut squash soup was also delicious, but came in for some criticism because it used only half the can of coconut milk (what to do with the rest?), and was also vague on what kind of curry paste to use.  Continuing with the orange theme, red lentil soup was a harmonious combination of flavors; this too was “a keeper!” 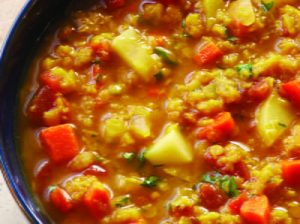 More from RF:  a couple of us tried teriyaki fish and deemed it “boring.”  It also had an unappealing color, which didn’t help matters.  Creamy seafood stew was “OK—but I think I make a better one.”  Better was oven-poached fish with leeks and wine; the leeks were tasty though they didn’t quite cook through by the time the fish was done.   Not fried fish was a big hit: “really good!  And so easy!”  The crispy breadcrumbs and the Old Bay seasoning made for a winning combination.  Caramelized onion pie was filled with “awesome” onions; it was delicious and reheated well.  And spinach lasagna was yummy;  best of all it was “so much quicker” than other lasagna recipes because neither the noodles or the spinach had to be cooked before assembly.  One main dish’s name so intrigued three of us that we had to try it:

rumbledethumps, and we all loved it.  It’s a casserole version of colcannon, a hearty mix of mashed potatoes and cabbage; in this recipe, there’s also broccoli and a cheese topping.  Perfect as either a main dish or side.   Speaking of sides, roasted Brussels sprouts were “surprisingly good” for an admitted sprouts skeptic, and gingered broccoli and carrots was “really good—and better the next day.”  The ginger flavor was just right and was a good foil for the veggies.  Greek lemony potatoes were pleasant though they could have used more lemon flavor, but “I would try them again.”  We baked a few desserts, too:  two of us tried vegan chocolate cake, which was good, though not outstanding; the chocolate flavor was a bit too mild for us.  Cowboy cookies were just  “OK” for one person, but others really enjoyed this hearty combination of oats, nuts, chocolate chips, and raisins; “one would fill you up for the day!”

Some in the group also dipped into the RT book: award-winning chili with chocolate and stout was a winner.  Mushrooms and lentils added tons of flavor; the one drawback of this recipe was that it had “so many ingredients!” which added significantly to the prep time.  With it you could make carrot cornbread, which turned out a bit doughy (“I used the wrong flour”) but still tasted good; the grated carrots made this bread unique and enjoyable. 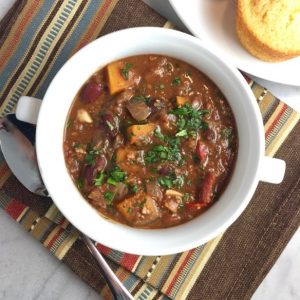 Winter squash and red bean mole was yet another iteration of chili that was nicely spicy, but “squash is a pain to cut up!” Squash was apparently on everyone’s radar (it was Fall after all): in addition to the chili, roasted winter squash agrodolce featured it, with two praiseworthy sauces– one spicy and one sweet.  And white bean stew with rosemary was another savory melange of beans and veggies; it was “nice and thick,” but be sure you really like rosemary, as it was “assertive” in this dish.   On the sweet side of things, cardamom cookies were a buttery treat; however, it was very difficult to grind the cardamom seeds, and unfortunately cardamom is quite expensive.  But despite these obstacles, they were deemed good enough to try again.  Lastly, Turkish coffee brownies had an odd, rough texture but since they tasted great it didn’t matter that much.

Overall, our group enjoyed and appreciated these two titles.  If you’re at all interested in vegetables, it’s always nice to find inventive ways to prepare them; and since the Moosewood group has 40 years of experience making veggies taste their best, we were bound to find at least a few good ideas.  There were, of course, a few complaints: an over-reliance on those two ’70s workhorses, coriander and cumin; some recipes depended a bit too much on copious quantities of butter and/or cheese; and a few recipes were just plain boring.  But despite these caveats, most felt that the books reflected the best of modern vegetarian cuisine, and gave them doable and delicious ways to go meatless more often.  Our voting echoed these good vibes: we averaged out to a 4.0 (out of a possible 5), which is one of the higher scores we’ve ever recorded.  In another telling statistic, four people said they plan to buy one of the books.  Road trip to Ithaca, anyone?

Please watch for our next Bibliobites roundup (coming soon!) where  we’ll be talking sweets from Maida Heatter’s Happiness is Baking.