What is the best way to get to know a librarian?  By getting them to dish about books, of course!  Each month, we will introduce you to one of the librarians of Chelmsford Public Library.  This month, we talked to Wes Jones, one of the friendly faces you see at the Main Circulation Desk.

Wes worked as a technical writer and freelance artist before starting his career at the Chelmsford Public Library as a page. He then embarked on an “epic quest filled with magical adventure” that culminated with him joining the staff at the circulation desk.  When he’s not at the library, Wes plays a multitude of board games, creates art (including the amazing Octopus Librarian print shown here), and writes dark and whimsical fiction.  He claims he is definitely not a small octopus piloting a human-shaped robot, and he can’t figure out how these rumors keep getting started.

What was your first library?

“I grew up in Chelmsford, so it was this one.  I remember the main building pre-renovation, and even the children’s library when it was a separate building.  I watched some of the Scoboria House relocation, since it’s not every day you get to see a house hop on a truck for a ride down the street.”

What book(s)s are on your nightstand right now?

The Godstone by Violette Malan.

What book do you love to suggest to patrons?

“All Systems Red by Martha Wells.  The human/machine hybrid protagonist protects its team of humans from hostile fauna, other humans, and themselves, but just barely well enough to keep everyone from noticing that it has hacked its own systems and doesn’t actually need to obey them anymore.  It doesn’t really understand people, has trouble processing its own emotions, and just wants to be left alone to watch media.  I love this series so much.  I usually prefer paper books to audio, but the audiobook versions of this series read by Kevin R. Free are fantastic.”

What are your top three “desert island” books?

The Watchmaker of Filigree Street by Natasha Pulley

The Night Circus by Erin Morgenstern

What is your favorite line from a book?

“It’s hard to estimate what a person of my intelligence is capable of, so in prison it’s Gilligan’s Island rules – they’ll always wonder if I can make a radio out of that coconut, or a stun gun.  And maybe I could if I had one, and enough copper wire.” – Soon I Will Be Invincible by Austin Grossman.

What is the last book that made you laugh or cry (or both)?

“Project Hail Mary by Andy Weir – Much like his first novel, The Martian, this features little moments of humor to offset the dire circumstances of its protagonist.”

What are your top five board game recommendations that can be found in our collection? 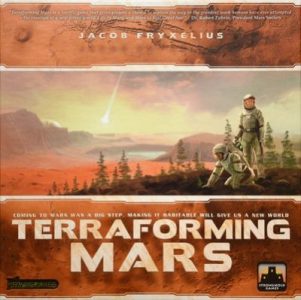 “In escalating order of complexity…

Splendor – A good game for people who are new to board games, since it has enough decisions to be engaging, but not so many as to be overwhelming.

Xenon Profiteer – I love weird, esoteric themes for games, and in this one you build your own cryogenic distillation facility to harvest xenon from the air.  The actual game isn’t nearly as complicated as the science it represents, and I think this is another good game for new players.

Wingspan – There are so many wonderful little touches to Wingspan that show how much care went into the design, and how much the designer loves birds.  Wingspan is a remarkable game that I would recommend to anyone.

Terraforming Mars – One of my favorite things about this game is the range in scale of the projects each card represents, ranging all the way down to introducing particular microbes to Mars and all the way up to crashing the moon Deimos into the surface to generate heat and produce metal resources.

Tzolk’in – The board features moving interlocking gears!  This is a very complicated game that requires you to plan several turns into the future to really do well, which can be very rewarding for players looking for a challenge.”

Why do you love working at the library?

“Even when I was just a page I enjoyed helping patrons find the books they wanted.  Lately, it’s been great connecting patrons with items from our Library of Things.  Reactions like “I can really borrow a guitar?” and “You really have a pressure washer?” make my whole day.  Checking out the bubble machine to a patron always puts a smile on my face.  Now that we’ve added board games to our collection I’m really looking forward to introducing patrons to some excellent games.”