It is almost time to wrap up our Winter Reading Challenge BINGO game!  If you have been playing along, turn in your completed BINGO card at the main desk, through curbside pickup, or via email no later than March 7 to be entered to win one of three $25 gift cards to bookshop.org.

Prizes for reading, you ask?  You bet!

Those that read our blog will remember that, even though I am not eligible for fabulous prizes, I am working on my own BINGO – and reader, I have done it!  BINGO! (Sorry, I had to say it!).

Read a cookbook featuring a cuisine you have never tried: 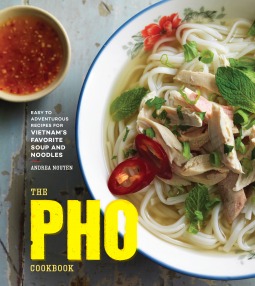 I am not very adventurous in the kitchen, but one of my resolutions this year has been to try at least one new recipe each week, so that played in perfectly to this particular BINGO square.  I chose The Pho Cookbook: Easy to Adventurous Recipes for Vietnam’s Favorite Soup and Noodles by Andrea Nguyen.

Pho is a popular Vietnamese street food consisting of savory broth, rice noodles, and various herbs and chiles for toppings.  I have seen this cooked on Chopped many times, but have never tried it.  The book itself has an excellent introduction to pho (pronounced “fuh”), including its history, ingredients, techniques, and assembly.  There are many recipes – from beef to chicken to vegetarian – as well as many different preparations. It also includes recipes for fried rice, pho noodles, fried bread sticks, bahn mi, and various accompaniments to pho, like garlic vinegar, hoisin sauce, and chili sauce.

We tried the seafood pho, because I don’t eat meat and my husband won’t eat dinner without some kind of protein.  I did need to buy some spices not in my cupboard – star anise, fennel seeds, and coriander seeds – but otherwise all the ingredients were easily found at the local Market Basket.  I followed the directions closely, but I used the wrong noodles.  There are so many to choose from, and I just bought the wrong size. Which in the end turned out to be a good thing – I liked the savory broth and the shrimp, but my husband wasn’t a fan and ended up eating the noodles like pasta without the broth. So, probably not something that we will make again, but I will feel a bit more in the know when I watch Chopped, and maybe will have the courage to try the real thing someday!

Read a book in translation:

I am sure that I have read books in translation before, but choosing this square made me conscious of the role that a translator plays in a reader’s understanding and enjoyment of a book.  A good translator will make a book relevant, interesting, and convey the author’s intentions – all in another language. 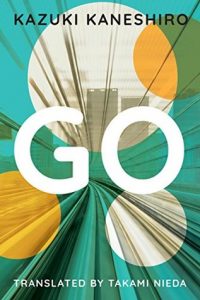 I chose Go by Kazuki Kaneshiro, translated by Takami Nieda.  The narrator of this short poignant novel tells us right up front, “First, let’s get one thing straight. The story that follows is a love story. My love story.”  Which is true – it is the story of Sugihara, a Korean student attending a Japanese high school, and the Japanese girl he falls in love with, Sakurai.  We don’t know their first names – which seems strange, but it is part of their meet-cute story.  What is also true is that this is not just a love story, but also one about prejudice, exclusion, and assimilation.

There is no time-period given in the book, but it feels like a very contemporary story. Koreans are discriminated against in Japan, even those that are born there, speak the language, and raise their families there. There is also prejudice between North and South Koreans.  Sugihara experiences all of these in both casual and hurtful ways in his daily life in Japan.  It makes him question the nature of borders – what really makes you a citizen of a country, what does it take to belong?  His love story does not answer this question, but the tale of these two young people, and how they evolve in their thinking, will stay with you long after you finish.

We have plenty more suggestions for our Winter Reading Challenge.  You can find them here, or you can feel free to email me at dparsi@chelmsfordlibrary.org.   Read on!