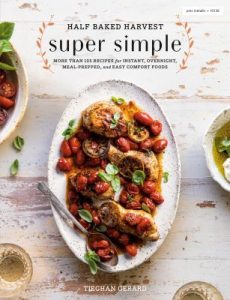 In the world of cookbooks, the quest for the perfect dinner seemingly never ends.  Legions of chefs and bloggers continue to produce books promising us a flavorful, foolproof, from-scratch meal without spending hours in the kitchen.  This month our Bibliobites group returned to this well-worn path with Half Baked Harvest Super Simple by popular blogger and Instagrammer Tieghan Gerard.  Did we feel the love?  And more precisely, were the recipes worthy of our time and taste buds?

Ms. Gerard’s first claim to fame was as a food photographer, and the photos in this book did not disappoint.  There are inviting, full-page photos of almost every recipe, a feature we always appreciate.  The font is a bit smaller than we might have liked, but as a result, many, if not most, recipes fit on one page– helpful for cooks with messy hands!  One person noted that this book is available with a spiral binding, super-practical if not quite as sturdy as a regular library binding.  We also liked that the recipes often provided options for method; for instance, you could make a soup either on the stove,  in the slow cooker, or in a multicooker (Instant Pot).  When we got down to the actual cooking, one person spoke for all when she commented that the food was “easy yet amazing.”  So, spoiler alert: this book is one of our highest rated ever!

With all that amazing food, you might think we thoroughly tested plenty of recipes– and you would be right.  Though this book includes chapters on breakfast, appetizers, and desserts, as usual most of us focused on main dishes. 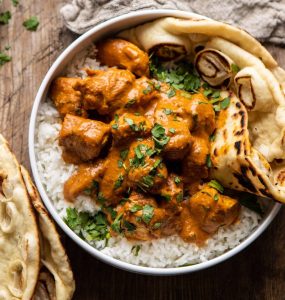 For all you carnivores out there, among the hits were “very tender” coconut chicken tikka masala; though, with 3 tablespoons of garam masala, “make sure you like your brand,” as it’s the dominant flavor.  Staying with chicken, instant chicken gumbo was “spicy….really good,” and it aged well.  Kai’s favorite sesame orange chicken was indeed a favorite.  It had a yummy soy- and hoisin-based sauce and tasted “awesome.”  Three people made white wine braised chicken with artichokes and orzo; everyone loved the combination of artichokes and olives; lemon added “a nice zing.”  Also, “leftovers are really good– if you have any!”

There were other meaty doings, as well: three cooks chose to make quick Filipino adobo, a pork stew with a lively salty, tart, and fruity marinade. 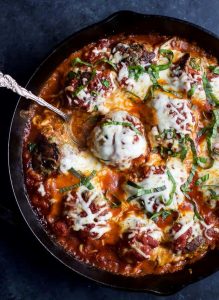 Sun-dried tomato and turkey meatball bake was just plain “wicked good;” as an added bonus, it only dirtied one pan.  Gingered apple pork chops sounded luscious, but called for too much cumin, which overpowered the other flavors.  But, “I would try it again.”

Moving on to fishy territory, browned butter scallops were “quick and easy,” and tasty, too.  But sesame crusted salmon was a bit of a flop– it was “bland” despite the sesame crust, and “sounded better than it was.”  Extra saucy coconut fish curry was so good, our cook made it twice!  The lime and other Thai flavors hit the spot, and, combined with coconut milk, it was all “yum!”  One pot Spanish chorizo, shrimp, and rice pilaf was another dish that was easy and loaded with flavor; spicy chorizo and smoked paprika beautifully complemented the shrimp.  Unfortunately, another shrimp dish, jalapeno garlic butter shrimp, didn’t make the grade– somehow the flavors of garlic and honey didn’t come through.

This title doesn’t neglect vegetarians, either: there were plenty of options to choose from.  Three people made spinach and artichoke macaroni and cheese bake.  For some it was a keeper, “the best ever;” and it had the undeniable virtue of being a one-pot recipe.  But one person felt it somehow didn’t taste cheesy, despite using sharp cheddar.  The addition of spinach and artichokes was definitely welcome, though.  We tried a few other noodle-based dishes: penne alla vodka two ways was easy enough, though it was “a bit too spicy…good but not great.”  Four people made

veggie loaded pad see ew, a cousin of pad Thai.  For one person it was a keeper; others thought it was a  solid, if not outstanding, choice, with a sauce that was either “really good” or “needed something!”  We did like being able to customize the amounts and types of veggies to suit our mood and what we had on hand.  It was hard to argue with garlic butter ramen (because how can you go wrong with garlic and butter together?); it was tasty and “so easy!”  However, it was “a lot of butter,” a flaw or a plus, depending on how you want to look at it.  Mushroom “cheese-steaks” were so fantastic that “I made them three times!”  These were very easy and quick to make, and were an excellent leftover.  However the accompanying yum yum sauce was “disappointing– it needed something;” but it was still “my all-time favorite!”

Since our weather in April was on the cool side, we were still making soup: chicken tortilla soup was a “super easy” keeper, with garnishes (crushed tortilla chips, diced mango and avocado) that kicked it up a notch.  Golden butternut squash soup was rich and creamy with coconut milk and savory with shallots, an easy and delicious version of this now-classic soup.  Another classic, broccoli cheddar soup, wasn’t quite cheesy enough, but all was forgiven since the topper of seasoned pretzels was addictive– “really good!”  A couple of veggie sides were also standouts: 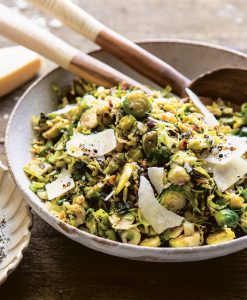 cacio e pepe brussels sprouts were fantastic, with loads of pepper and Parmesan cheese delivering big-time flavor.   Black pepper buffalo cauliflower bites were “a bit of work” since you had to coat all the flowerets with a sauce and then breadcrumbs mixed with Parmesan, but they were an appealing way to eat cauliflower.  However, the ranch dressing had “too much dill,” though that could easily be adjusted.

There aren’t a ton of desserts in this book, and oddly enough not many of them called to us.  One person tried the chocolate mousse and thought it was “eh!”  The cream cheese in it was hard to incorporate (even when it was at room temp) and left visually unappealing little white blobs in the finished mousse; also, it possibly “needed more sugar?”  All in all, not a winner.  Two people baked the intriguingly named 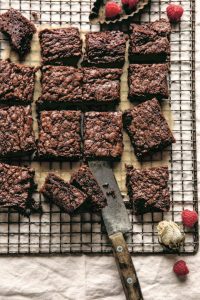 five ingredient hazelnut brownies.  Nutella provides the chocolate and the fat for these brownies; but for one person, the result wasn’t nearly chocolatey enough.  Another baker added the optional chocolate chips (which actually makes six ingredients!) and that definitely improved the chocolate flavor.  They were super-quick to make and had a nice texture, so if you happen to have Nutella on hand it’s probably faster than a boxed brownie mix.   And, though not a dessert, the no-knead bread and pizza dough was an incredibly fast, amazingly good pizza dough.  The special sauce is 12 ounces of beer, which makes the dough soft, light, and easy to handle.  The beer is faintly discernible in the finished product, so if you don’t like beer, that’s something to be aware of.

As you might surmise from all of the above, this title was a runaway success for everyone.  As advertised, most of the recipes were simple, easy to put together, and used ingredients we had or that were easy to find.  Best of all, they were enjoyable to eat!  Ms. Gerard has just published a new cookbook, Half Baked Harvest Every Day, which will likely make its way into our rotation at some point!  Unsurprisingly, when the votes were tallied, we averaged out to a 4.38 (out of a possible 5), one of our highest scores ever.

Join us at our next meeting, on Friday, May 27 at 11 AM as we discuss  NY Times writer and author Melissa Clark’s latest, Cooking in French.  We will meet in hybrid format; please register online to attend either in-person or virtually.  See you then!