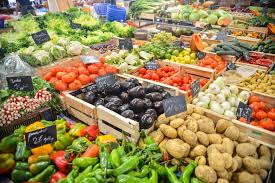 What is it about cooking with vegetables that is so satisfying?  Is it the visuals– the mind-blowing array of colors, shapes, and textures?  Is it the elemental joy of taking an ordinary ingredient and turning it into something full of complex flavor?  Is it the fun of being on-trend with the newly-hip produce aisle?  Or maybe our bodies and brains are just jazzed on all those vitamins and antioxidants!  Whichever it is, the farm stand and produce section beckon like never before, especially in the bountiful month of August.  Though our Bibliobites group has tackled the subject of vegetables before, it seemed like a good time to revisit it, and to explore some new titles about this ever-expanding topic.

In the true confessions department, no one could say that they’d tried a totally unfamiliar vegetable.  Perhaps the lure of corn and tomatoes was just too strong?  One person used new-to-her fresh oregano in an eggplant cheesecake recipe from Plenty More by Yotam Ottolenghi.  This was a savory, quiche-ish concoction of eggplant, tomato, and cheesy custard; delicious except the fresh oregano was overpowering and its leaves too chewy.  But, more than good enough to try again.  Two people finally got to make the

tomato pie recipe featured in the library’s 2020 One Book title, Ann Hood’s Kitchen Yarns.  The pie was cheesy and (of course!) tomato-y, summer comfort food at its finest.  The pie’s crust was a soft, biscuit style that was enjoyably different, and easy to make.

Since we were working on a general subject and not a specific title, a few people took the opportunity to re-explore some old favorites.  From the first Moosewood cookbook, tomatoes were highlighted in their “fabulous” gazpacho recipe.  “It keeps well, too!”  Another seasonal winner was the crunchy-topped peach pie, with its sweet and toothsome oatmeal crumble topper.  Continuing with the summer theme, the Vegetarian Times Cookbook has a cherry tomato and summer squash crumble, which our group member looks forward to making every year.  This “delicious” casserole can be a main dish or side and has a delectable buttery bread crumb topping.  This book was also the source for a tasty nectarine salsa, with tomatoes, basil, and lemon zest; it’s so good that “it doesn’t last long!” 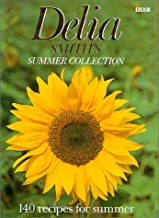 One person loves Delia Smith’s cookbooks from the early 2000s; this British author is well-known in the U.K. though none of us Yanks had heard of her.  Her Piedmont roasted peppers are “spectacular!”  It’s a simple, classic combo of peppers, tomatoes, basil, and anchovies roasted with olive oil and garlic; serve with crusty bread to mop up all the delicious juices.  Fresh asparagus with foaming hollandaise is also a keeper with its “foolproof” hollandaise.  Though Ms. Smith’s books aren’t widely available locally, her website has plenty of recipes for you to peruse.  Staying with the Brits, Nigella Lawson provided a yummy red chilli jam recipe (” it’s a pretty color, too!”), and one for green sriracha as well (“It’s got a kick but it’s good!”).  And, if you’re still drowning in tomatoes, try the tomato chutney recipe at the end of this post; it uses lots of green and/or red tomatoes, is “easy-peasy” and is excellent with cheese.  This heirloom recipe is courtesy of our group member’s friend.  Thank you, friend! 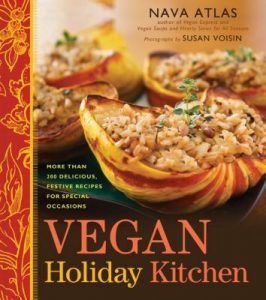 Vegan Holiday Kitchen by Nava Atlas is another older (2011) title that proved to be worth dusting off.  Corn fritters with cilantro sauce were “fabulous” with their sweet and spicy tomatillo sauce.  A keeper!  Lemon, garlic, and rosemary potatoes were a good, classic combo, but they “needed more lemon.”  Mixed greens with apples, beets and pistachios was another winner with its lemony dressing and tart cranberries accenting the main ingredients.  One “klunker” was the red quinoa pilaf with kale and corn, which sounded good, but our cook didn’t care for the overall flavor profile.

More older titles worth seeking out: Vegetables Everyday by Jack Bishop (“a classic!”); Cooking From the Farmers’ Market by Williams-Sonoma (“great photos, info on how to buy, how to work with”); Vegetable Love by Barbara Kafka (“encyclopedic– a Joy of Cooking for vegetables– but no pictures”); Too Many Tomatoes, Squash, Beans, and Other Good Things by Lois Landau (great title, but “no pictures!”). 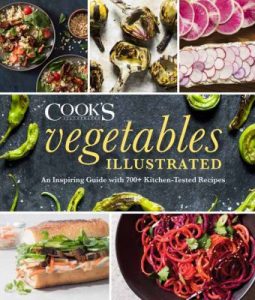 As for newer books, a few of us test-drove Vegetables Illustrated from America’s Test Kitchen.  As is often the case with ATK titles, it’s an extensive and exhaustive treatment of its subject.  This book is a heavy tome with plenty of enticing photos, and sometimes-lengthy headnotes, which some adore and others don’t!  It’s organized by veggie name, which makes recipes easy to find when you’re faced with, say, that glut of zucchini.   Speaking of which, the zucchini bread called for a full 1 1/2 pounds of shredded zuke!  It was a light and tasty version of this ubiquitous quick bread.  Another now-common recipe, avocado toast, was given star treatment with lemon zest and red pepper flakes.  The recipe made us realize, again, how good something so simple can be when given a little care and attention.  From the cabbage section, honey-mustard coleslaw was a hit.  It had “a bit too much mustard” but was overall very good.  There was also a helpful tip about wilting the cabbage with salt to cut down on excess moisture.  Bulgur salad with carrots and almonds was a great option for a steamy day, since the only cooking bulgur needs is a soak at room temperature.  This was a “refreshing” combination, with accents of mint and cilantro.  Sweet potato, poblano, and black bean tacos were a flavorful vegetarian main dish; they featured a pickled onion garnish which was “so easy– so good!”  There was general agreement that pickled onions are fabulous on just about everything! 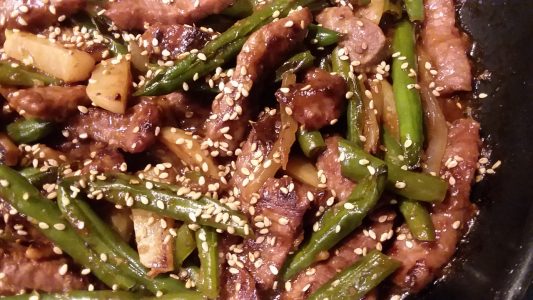 Beef and Chinese broccoli stir-fry was a quick and easy version of this classic dish; and while eggplant involtini was a bit involved, the results were worth the effort.  It made nice leftovers, too.

Other newer titles we checked out included Vegan for Everybody (also from the ATK lineup); The Berkshires Farm Table Cookbook by Elisa Bildner (the velvety zucchini soup was “lemony and delicious” and included arugula); Food, Health, and Happiness by Oprah Winfrey (with a dairy-free yet creamy summer corn chowder); and Vegetables Unleashed by Jose Andres.  This title features “wonderful” pictures; author/chef/activist Andres (founder of World Central Kitchen) visits several farms and discusses farming practices.  His Greek zucchini fritters were accented with a tasty yogurt-caper sauce.   It’s worth noting that several people in the group had made zucchini fritters.  It seems to be a popular, easy, and delicious way to get ahead of this prolific squash!

Though it wasn’t a month of revelations in the kitchen, we all thoroughly enjoyed the opportunity to get up close and personal with our veggies.  Hopefully some (or all!) of the above titles will bring you some inspiration and “produce” some delicious dishes for you and yours.  For September, we’ll once again be reading/cooking from the same title(s): three books by Christina Lane that are about small-batch cooking.  All available at the main desk or via curbside pickup: Dinner Just For Two, Dessert Just For Two, and Comfort and Joy: Small-Batch Meals For Every Occasion.  Our next meeting will be Friday, September 25 at 11 AM.  We’ll chat via Zoom; if you’re not on our Bibliobites mailing list and would like to attend, please email group leader Andrea Grant.  See you then!

12 large tomatoes, green or ripe or a combination
4 onions
1 small handful of salt
1 pound sugar
white vinegar
1 tablespoon curry powder
2 chilies, chopped
1 teaspoon cayenne pepper
1/2 tablespoon mustard powder
2 handfuls raisins
Chop the tomatoes and onions to the size of walnuts; sprinkle with salt and let stand overnight.  In the morning drain off the accumulated liquid, then boil the vegetables for 10 minutes with the sugar and enough vinegar to cover.  Add the remaining ingredients and simmer for an hour or so, until thickened.  Ladle into hot canning jars and process in a boiling water bath for 10 minutes.  (Please note: consult a canning book for details on processing safely!)
Store in a cool pantry, it is best after a month or so!