As the newest member of the Readers Advisory team here at Chelmsford Public Library, I was asked to write an introductory blog post about what I am currently reading.  Which led me to think about reading in the time of COVID.  I do not know about you, but one of the things I missed the most during our “stay at home” order this past spring was the library.  I was so happy when my local library started up curbside pickup that I took a picture – there were four books in that first stack, all of them new books by favorite authors that had come out while everything was closed.  While things are better now, we still have to wait just a little longer for those new and popular books, so that we can read those books safely. 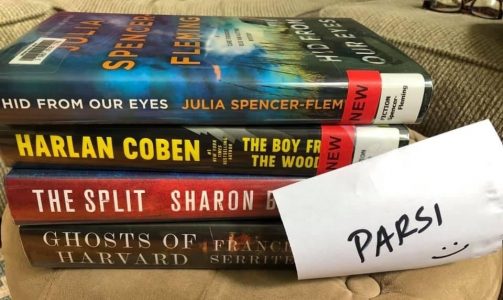 It is a strange new world of reading out there, but it does have its advantages.  One of them is finding new authors to read – and we in Readers Advisory are here to help!  I know some of you are waiting for the latest Armand Gamache novel, All the Devils Are Here, by Louise Penny.  I am too!  While we wait, I would like to recommend two other series that you might also like, and might help you pass the time until your turn on the reservation list comes around. 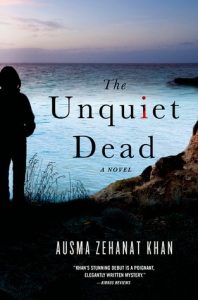 The Unquiet Dead by Ausma Zehanat Khan is the first in a series, set in Toronto, featuring detectives Esa Khattak and Rachel Getty.  They are part of a Community Policing unit that specializes in minority-sensitive cases.  In The Unquiet Dead, Esa and Rachel look into the death of a man that, on the surface, appears accidental.  The more they learn about the victim, however, the more they suspect that he might not be a quiet art-loving Canadian citizen, but a war criminal with ties to the Srebrenica massacre during the Bosnian War.  Suddenly, his death does not seem accidental, and there are many who might wish him dead.  The main narrative is interspersed with haunting stories about survivors of the Bosnian War, which tie back into the ending in a very satisfying way.  I liked this book so much that I have read the next two in the series already – The Language of Secrets and Among the Ruins.

I like many things about this series.  As in the Gamache novels, the interplay between the main characters is as important as the mystery itself.  Esa Khattak is a complicated man, a Muslim and minority, attempting to navigate a sensitive job in a world where he does not always feel comfortable.  Rachel Getty has her own troubles, including a long-missing brother and disquieting home life.  Together, they make a formidable team.  The other thing I really like about these books is the humanity and compassion that the author grants all of her characters – the good, the bad, and the somewhere in-between.  This is not surprising, as the author holds a PhD in international human rights law.  It adds an extra layer to the story, and often to the ending, which has left me thinking about each book long after I have finished reading

The Crossing Places by Elly Griffiths is also first in a series, this one set on the windswept beaches and marshes of Norfolk, England.  The main character is Dr. Ruth Galloway, a forensic archaeologist, who teaches at the local university and lives on the secluded marshes.  Bones are discovered on the beach and Detective Chief Inspector Harry Nelson asks Ruth for her help in dating the remains.  Nelson hopes they belong to Lucy Downes, a young girl who went missing ten years ago.  Instead, they discover that they are almost two-thousand years old.  Ruth is intrigued by the ancient bones, by the Lucy Downes case, and by Harry Nelson.  When another girl goes missing, Ruth joins Nelson and his team in trying to find her before it is too late. 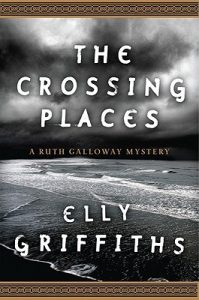 As in the Gamache novels, where the village of Three Pines is almost a character itself, the Norfolk of the Ruth Galloway series plays a large part in the action.  The characters often find themselves pitted against the natural world or drawn into Norfolk’s ancient history.  I also like the relationship between Ruth and Harry Nelson, which has its origins in this first book.  It develops in unexpected ways as the series progresses, which makes two reasons to look forward to the next book – the mystery and the characters.  I discovered Ruth when the series was well along, so had that reader’s pleasure of knowing there was always the next book on the shelf.  Alas, I am now caught up, but I am looking forward to the latest, The Lantern Men.

I could go on and on with other suggestions, but I hope these two series will hold you until the new Louise Penny is in your hands.  If you would like to talk more mystery, feel free to email me at dparsi@chelmsfordlibrary.org.