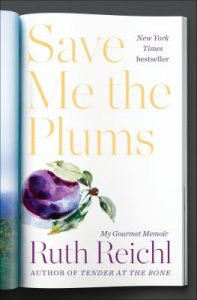 Author/editor/critic Ruth Reichl has had a long and storied career in the food world; and she’s shared many of her unique experiences in a series of memoirs.  Our Bibliobites group first perused this territory back in 2014, when we reviewed Garlic and Sapphires, Ms. Reichl’s engaging and revealing memoir of her years as a restaurant critic for the NY Times.  This month’s title, Save Me the Plums, covers 10 years post-Times when the author was editor-in-chief of the late, lamented Gourmet magazine.  The good, the bad, the ugly, and the incredibly expensive are all chronicled in the author’s eminently readable style; and we all learned maybe more than we ever wanted to know about magazine publishing! 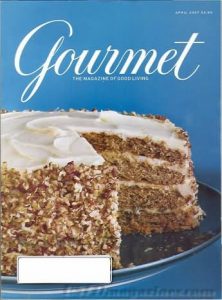 Speaking of Gourmet, thanks to the internet we were able to obtain back issues of the magazine from 2007 and 2009– 2007 perhaps being close to its heyday, and 2009 representing its final year.  Having the actual product in our hands, after reading about all the time and effort that went into creating it, really brought those chapters of the memoir to life.  But, it must be said that the magazine left most of us cold.  We thought too many of the recipes were overly time-consuming  (a criticism that was often leveled at the magazine), and elaborate in an unnecessary way.  For example, one issue had a recipe for fettuccine lasagna with meatballs that was a three-day affair; and it didn’t seem that much different than your average one-day lasagna.  It may have been worth it, but the full page of instructions was a bit intimidating.  We were also incredibly distracted by the pages and pages of ads (“so many!”) for super-expensive items, often featuring “rich people on vacation.”  This overt conspicuous consumption was a big turn-off for us.  The world Ms. Reichl inhabited at Gourmet seemed so unreal to us; it was like something you’d read in a book (!), and the magazine faithfully reflected that world.  It turned out that most in our group had been Bon Appetit readers, and we didn’t know until we read this memoir that it was considered the plain-Jane poor relation of Gourmet.  There’s aspirational, and then there’s completely out of our league– which is how the Gourmet issues felt. 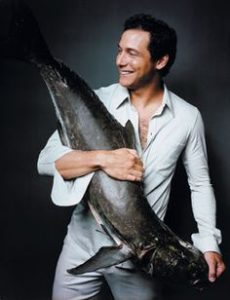 On the plus side, we did love the photography in the magazines; and though some of the covers didn’t appeal to us (“that wouldn’t stop me dead in my tracks at the newsstand”), we could appreciate their unique qualities.  During Ms. Reichl’s tenure, much effort was expended to improve both the visuals and the quality of the articles, and we felt that overall the effort was successful.  A few people mentioned that they weren’t really drawn into the writing in their issue; as is often the case, some articles were better than others.  We all loved David Foster Wallace’s article, “Consider the Lobster” which generated much controversy when it was first published in 2004, but which would likely be considered mainstream today.

Staying with lobster for the moment, thanks to the internet (again!) we were able to read 1946’s “Night of Lobster” by Robert P. T. Coffin; in the memoir Ms. Reichl recounts reading this Gourmet article as a teen and being completely swept away.  In this case, we agreed with the author: this evocative piece had a true “you are there” quality with its  spare, Hemingway-esque writing.

So, we weren’t all that crazy about Gourmet, but we loved the memoir.  It was a revealing peek into a world that we knew nothing about; and even though at times it was hard to relate to that world, it was still a satisfying read.  Ms. Reichl’s story moves along nimbly and showcases an incredible cast of characters who’d be right at home in, say, The Devil Wears Prada.  Group members praised her descriptive powers, both for food and people; and of course we enjoyed all the “gossipy bits” about various NY movers and shakers.  We were impressed by the author’s adventurous tastes in food; one of our favorite chapters involves her son’s ongoing relationship with a very astute sushi chef who broadened his food tastes considerably.  And we could certainly relate to a mom with a child who was a picky eater, despite the amazing example of parents and constant exposure to every type of food imaginable. 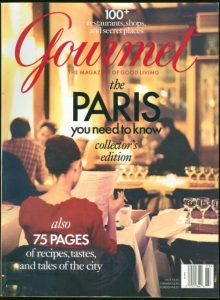 There were several descriptions of lavish travel in this memoir– we were amazed at how many people were needed to put together an article on, say, Paris; but the real stunner was the way these trips happened, with no expense spared.  From restaurants to hotels, it was all over the top in a way that was hard to envision.  Later in the book, as it becomes clear that the magazine may be doomed, there’s a final trip to Paris on a budget– and this was of course much more relatable.  And the author makes the valid point that meals don’t have to be elaborate to be superb, and a hotel you’re only using for sleeping doesn’t have to be five-star to be comfortable.  I guess it’s all what you’re used to!

We’d definitely recommend this or any of Ruth Reichl’s memoirs– they’re a nice mix of the lighthearted and the serious, the triumphs and defeats, the mundane and the incredible.  We enjoy this author’s highly readable style, which makes these books hard to put down.  Most of us do prefer her earlier titles about her growing-up years, and of course we loved the humor that’s so evident in Garlic and Sapphires, but Save Me the Plums is worth your time as well.  Our zoom meeting was unfortunately interrupted by a power failure (affecting a good-sized portion of the town), so voting was a bit spotty; but of those who voted, the memoir averaged out to 4.2; the magazine 1.9!

Though we may not have done much cooking in February, things will be heating up this month as we explore the ever-popular topic of pizza.  Choose from either Truly Madly Pizza by Suzanne Lenzer or Todd English’s Rustic Pizza by local chef Todd English.  Both are available at the main circulation desk or via curbside pickup.  We’ll next meet via zoom on Friday March 26 at 11 AM; if you’re not already on our mailing list and would like to attend, please email group leader Andrea Grant.

News flash: if you loved Gourmet and/or Ruth Reichl’s memoir, we’ll soon have available a Binge Box with a year’s worth of issues plus a copy of the memoir.  Great reading, and cooking, for a rainy day!