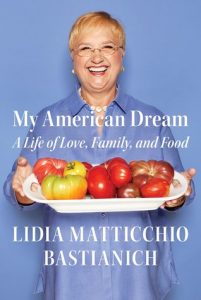 The multi-faceted and multi-talented Lidia Bastianich never ceases to amaze.  With six restaurants to her name (some in partnership with son Joe); five outposts of the Italian mega-market, Eataly; numerous PBS television series; at least fifteen cookbooks; and a vineyard in Italy, only one conclusion is possible: the woman must not sleep.  Ever.  This month’s title, My American Dream (written by Lidia herself, of course!)  is her fascinating and perhaps uniquely American story of unbelievably hardworking immigrants who achieve success in a big, big way.

Those of us who read this memoir thoroughly enjoyed it.  Most of us hadn’t known that Lidia and her family came to the US in the late 1950s as refugees from Communist  Yugoslavia.  The family’s struggles to adapt to their new culture, with its different language, food and customs, and their nostalgia for the “old country” were familiar to us– either from family stories, or from our own experiences.  We loved her affectionate recounting of her idyllic childhood in Istria, helping her grandmother cook and garden on their farm.  Her descriptions of life in a refugee camp, and as a newcomer in New York City were moving, though she tells her story in a straightforward, undramatic way.  We were so impressed by her capacity for hard work, and willingness to take risks;  as well as her unshakeable belief in herself and the cuisine she was eager to share.  There’s no doubt she was in the right place at the right time; but it’s what she brought to the table, both literally and figuratively, that have made her a star.

There were a few criticisms: we felt the second half of the book wasn’t as engaging as the first, with its  short chapters that briefly summarized restaurants that they opened, famous people she met/cooked for, and top chefs she cooked with or appeared with on television.  Those sections could have been edited a bit, as our main interest was in her personally.  Overall, though this was a satisfying  read– and audio!  Lidia reads the book herself and received high praise for her narration.  Why am I not surprised?   Many in the group recommended this title to friends and family, and a few planned to purchase copies as gifts.  Our voting averaged out to a 4.5 (out of a possible 5); high praise indeed! 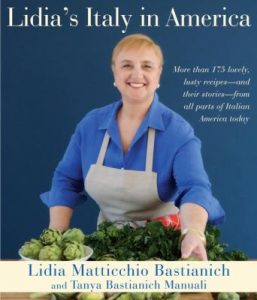 Though the group doesn’t always feature a cookbook, since Lidia has so many, we paired a recent title – Lidia’s Italy in America with the memoir.  It is a companion to one of her PBS shows that showcases Italian-American specialties from across the US.  In addition to recipes, there’s lots of history about Italian communities in America, both past and present.  As in the memoir, the author’s tone is inquisitive, engaging, and affectionate; and most of us enjoyed these small history lessons.  Some of us, though, don’t peruse a cookbook for the headnotes: give us the food!  Unfortunately, results from the kitchen were decidedly mixed! 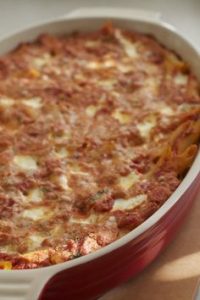 Some common threads emerged as we discussed recipes we made: for instance, many of the recipes made larger quantities than we might have wanted.  Baked ziti (a classic if ever there was one) called for a full pound of pasta, a pound of ricotta, and a pound of mozzarella!  The result was “good– but not great.”  Pasta e fagioli and minestrone similarly resulted in an abundance of soup– almost 6 quarts!  And neither recipe came up to snuff in the taste department, though this may partly be because dried cannellini beans proved difficult to find, and canned were substituted, which made for a less-flavorful broth.   The minestrone recipe features a pestata, which appeared in several recipes; this is a fine-textured paste (hence the word) that is used as a flavor base.  The pestata is made in a food processor, so if you don’t have one you’re kind of out of luck.  What would nonna have done?  It would have been helpful to provide an alternative method of creating the desired flavors in the dish. 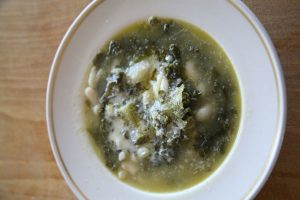 initially  sounded appetizing, but “you would be mistaken!”  The soup had way too much liquid and tasted like “dishwater– not even remotely good.”    There was an overabundance of bitter greens (kale and escarole), and a lack of flavor despite 10 cloves of garlic.   Not a keeper!

Surprisingly for an Italian book, we didn’t make that many pasta dishes.  One restaurant favorite, penne rigate in vodka sauce, didn’t turn out quite right– the sauce was too loose, and when it was finally reduced, the taste was just OK.   Rigatoni woodsman-style created some havoc in the kitchen, with crushed tomatoes escaping the pan, stress over the sauce not reducing properly, and a sudden recollection that someone didn’t like the main flavor in the sauce (sage).  Whew!  No wonder “I wouldn’t make it again!” 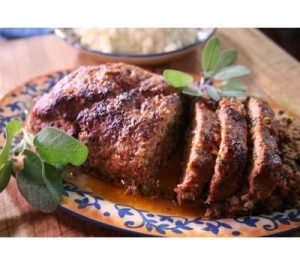 Italian American meatloaf did not endear itself to the cook, who struggled with 3 pounds of meat, bread cubes that didn’t seem to soften properly in milk (as instructed), and a finished loaf that sat in a pool of grease, as no rack was called for.  But, “the flavor was good,”   though not tempting enough to make again.  Meatballs (from spaghetti and meatballs) were a much more successful use of ground meat; these also featured a pestata, but our cook had a food processor, and she liked the idea of adding the carrot, celery, and onion that way.  The result was deemed “very good!”

Another classic, chicken parmigiana, called for stuffing the chicken breasts with ricotta, which made a somewhat lengthy recipe even longer.  It turned out “OK– but it needed something more.”  Gloucester baked halibut had a topping of saltines and cheddar cheese, but the cheese flavor didn’t come through in the finished dish; and most in the group agreed that Ritz crackers are the go-to for this type of recipe.   And shrimp scampi, also a dish with a pestata, seemed more complicated than it needed to be, and had too much butter.  “America’s Test Kitchen’s recipe is simpler and better.” 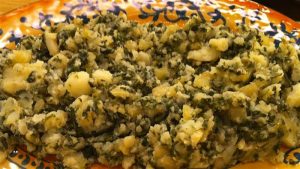 We tried some sides, too.  Unfortunately, Swiss chard and potatoes was “a real disappointment.”  It was “bland,” and the sliced almonds in the recipe didn’t seem to help matters.  It made a lot, but a few days in the fridge didn’t improve the taste of the leftovers.  Braised celery and mushrooms (from Lidia’s website) called for too much oil, but overall was tasty and did make good leftovers; “I’ll make this again.”  Braised cauliflower with tomatoes was also a potential keeper, though “I would cut back on the tomato sauce next time.”  Another cauliflower recipe, skillet cauliflower Torrisi, had a simple but delicious blend of olive oil, garlic, and Romano cheese topping the cauliflower– which unfortunately became mushy when cooked as instructed (braised, then roasted).  But it was tasty enough to try again.

Broccoli with garlic and anchovies provided an opportunity to try anchovies (“I never cooked with them”); this recipe also featured an ingredient that mystified many of us: peperoncino flakes.  We eventually realized this is just a fancy name for your basic red pepper flakes– which led to us wishing there had been a glossary, even a brief one, in the book.  In the end, the broccoli was “just all right,” and the rest of the anchovies were enjoyed by the cat! 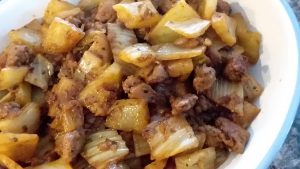 Braised fennel with sausage (there’s a lot of braising going on!) was excellent, especially if you’re a fennel freak like I am.  You can eat it as a side or use it to dress pasta, or even as a pizza topping, perhaps for St. Louis pizza?   This pizza has an unusual crust that contains baking powder; the crust is nicely thin but has a cracker-like texture.  It was interesting, and quick to make, but couldn’t match the flavor of its yeast-based cousin.

Oddly enough, we didn’t make many desserts!  One person had future plans to make the luscious-looking Boston cream cake, which is a cupcake rendition of this well-known dessert.   In addition to my fennel obsession, I love anything with figs, so I made St. Joseph’s fig cookies.

These had a delectable fig Newton-ish filling spiked with lemon, inside a rather tough, plain dough.   They sure looked cute, but I think I’d prefer a more tender outside, even if it’s not traditional.

Overall, the cookbook was disappointing for most of us.  Many of the recipes seemed somewhat time-worn, and we were often frustrated by inconsistent or unexpected results.  We wondered if perhaps this book had been rushed to print so that it coincided with the TV show, without sufficient recipe testing for the home cook.  Whatever the reason, this book didn’t call to most of us, but one person was so taken with it– the writing, the photography, the recipes– that she bought it.  However she hasn’t used it yet because, at her house, “Mr. Fussy is on a diet!”

Voting on the cookbook reflected our “meh” feelings: we averaged out to a 2.8 (out of a possible 5).  Lidia has lots of cookbooks to explore, but the feeling was, don’t waste your time on this one.  We sure didn’t love this this book, but we really do

Our next meeting will be on Friday, February 22 at 11 AM in the Fireplace Room.  We’ll be discussing blogger Deb Perelman’s second book, Smitten Kitchen Every Day.  Copies are available at the main desk.  New members always welcome; see you there!