The Library will be closed on Juneteenth, Sat. June 19 - Read More
Ebooks, streaming video, and more online resources are available 24/7 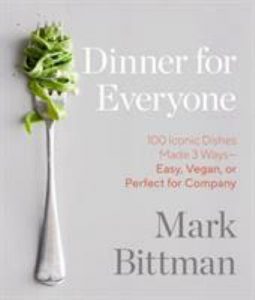 Every day, the dinner decision looms: Chicken or pasta? Takeout or home-cooked? Thirty minutes or two hours?  Most of us are fortunate enough to have the luxury of dithering over what we feel like eating on any given night, and how much time and effort we want to devote to our evening meal.  And cookbook authors, it seems, are more than willing to keep revisiting this engrossing subject.  You’d think by now that all possible avenues would have been explored, but just in the last year alone, our Bibliobites group has cooked their way through six recent titles devoted wholly or primarily to dinner.  And continuing in that vein, this month we kitchen-tested Mark Bittman’s most recent title, Dinner For Everyone, a bold claim if ever there was one.  However, since Mr. Bittman is the one who taught us how to cook everything, dinner for everyone seems like a natural progression!

This book is organized in a unique way: recipes are presented in sets of three, which detail three ways of producing a meal, either quick and easy; vegan; or company-worthy (essentially, a project for when you have time).  Each set of recipes represents a theme; a similarity of taste or ingredients or method.  This could be helpful if you knew you wanted to use a particular ingredient, or if you had a hankering for, say, Asian flavors.  But some in the group thought this arrangement was “contrived,” and others thought it was “fun to look at…but not so practical.”  Most of us aren’t yet inviting groups of people to our homes, so there wasn’t much testing of the “company” recipes; but we did appreciate that this title gave us lots of diverse choices.  One notably irritating aspect of the book was that for each set of three recipes, there was only  one photo, and most of the time the photo wasn’t of the recipe that was printed next to it.  This caused a fair amount of confusion, as we wondered why photo and nearby text didn’t match.  Needless to say, we wished for more (and logically placed) photos!

Most of us focused on the “easy” category (hey, we just want to use our time efficiently!), where we found some keepers– and a few duds.  Udon with ginger-roasted carrots and miso sauce was a definite keeper, with its deeply flavored, savory sauce.  Caramel salmon also had a fabulous sauce, though this traditional Vietnamese combination was “too sweet” for one person.  A “really good” peanut sauce was featured in 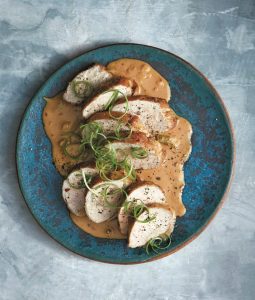 pork tenderloin simmered in peanut sauce; as is true of almost any peanut sauce, it was delicious on just about anything and played quite nicely with chicken or vegetables.  Sausage and escarole used this slightly bitter green in a new way: it was roasted and topped with Parmesan cheese, which was enjoyably different.  Falafel hash was another keeper; this simple combination really delivered in the flavor department, with just enough spice and a lemony sauce.  It would be excellent for brunch with an egg fried on top, but was just fine all by itself.  Spicy tuna rice bowl was a quick and tasty bowl made with basic pantry ingredients, but it suffered mightily  in the looks department: the tuna and its soy-laced sauce created an unappealing lumpy brown puddle atop the rice, reminiscent of– well, perhaps better not to say!

There were a few misses in this “easy” category; for instance, shrimp melts were “kind of blah,” plus the  mixture was hard to work with and didn’t want to stick together.  However, when at last the cakes were formed, they did stick to the pan!  Orzo with shrimp and dill had way too much pasta for the amount of shrimp (a problem also encountered with orecchiette with salmon), 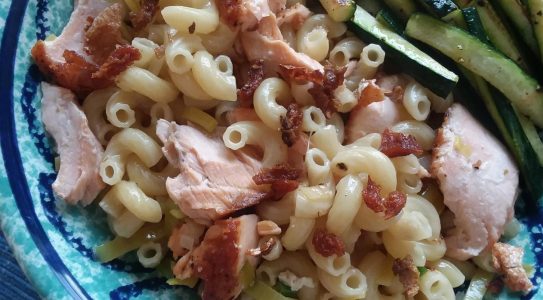 and both dishes were a bit too basic.  Shrimp with olives suffered from some timing issues, but it was fast and easy, though a bit too salty.  Sausage gumbo was “good…easy…but I have other gumbo recipes that are better;” and couscous and chicken with tunisian spices, despite a nice variety of spices, somehow “didn’t have a lot of flavor.”  One-pot stroganoff was a hit and a miss: one person thought it was “bland” and needed something to add depth; but another person enjoyed it and pronounced it a keeper.

Moving on to more challenging categories, those who tried anything in the “vegan” group unanimously thought the recipes were complicated– as in, time-consuming and with a lot of prep.  We did attempt a few; creamy white bean pasta and cauliflower was a vegan version of that all-time fave, macaroni and cheese.  This one was “pretty easy” and did deliver on its promise of creamy, saucy pasta and crisp breadcrumb topper. 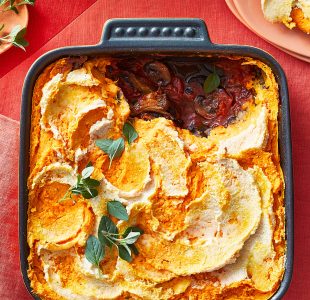 Mushroom-sweet potato moussaka was “a lot of work” with its many steps.  But it did make a big batch, and was “good….different,” though it called for too much cinnamon (2 teaspoons!).  However, it was worth trying again.  Teriyaki mushrooms also had lots of steps, but were “really delicious” with a yummy sauce.  And sweet potato and corn enchiladas were also a bit of a project (as enchiladas often are); overall, this dish was a winner, though the filling didn’t hold together well and “needed something.”  The sauce was excellent, though– in fact, most if not all of the author’s sauces were extremely well-liked.

One or two “company” recipes rounded out our adventures: orange beef was a super version of this classic, with a mellow, yet bracing, orange flavor.  Though it’s classed as a “project” recipe, it was fairly simple, and had the advantage of still tasting delicious after a few days in the fridge.  And baked mascarpone french toast 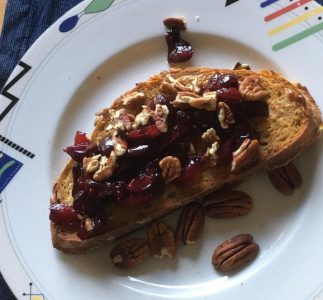 was a keeper; this lush, custardy casserole was perfectly accented by sweet/tart fruit.  Bonus: you put it together the night before.

As a group, we were unequivocally equivocal about this title!  Most of us are Bittman fans, and several own his books (the most popular being How to Cook Everything).  But this one didn’t seem to measure up to some of his others, despite admittedly producing a decent number of keepers.   One person was thinking about buying the book– she liked the range of choices and many of the flavor profiles appealed to her.  For the rest of us, it was a bit of a “meh,” reflected in our voting, which averaged out to just over a 3 (out of a possible 5).  As a point of comparison, the author’s VB6 book (January 2018) garnered a 2, while How to Cook Everything Fast (May 2017) snagged an overall 3.25.  So, we mostly like him– but we’re not completely sold!

We’ll next meet on Friday, June 25 at 11 AM.  If the weather is favorable, we will meet in person outdoors!! If it’s rainy or super hot, we will revert to Zoom.  This month we’re mixing in some fiction with our food with Joanne Fluke’s The Chocolate Cream Pie Murder.  Copies are available at the main desk.  If you would like to attend the meeting, and are not already on our mailing list, please email group leader Andrea Grant.  See you then!