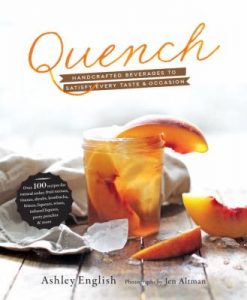 Author Ashley English is a sort of one-woman cottage industry for teaching “homesteading” skills; she’s written books on beekeeping, canning, home dairying (a past Bibliobites selection), and keeping chickens.  This month’s title, Quench: Handcrafted Beverages to Satisfy Every Taste and Occasion, is in a similar vein.  As in her other books, English shows us how to make something (in this case, beverages)  from scratch that we would normally buy at a store.  Is it worth the time and trouble to D-I-Y?

Making fizzy drinks appealed to a few people; two tried the orange soda but had contrasting opinions on the outcome.  One person thought it was refreshing and not overly sweet (in a good way); but for another person it was too mild– just not orange-y enough.  On the other hand, ginger brew had plenty of clean, sharp ginger flavor that would hit the spot on a hot day; and the cola was a tasty, sweet-and-spicy blend that could more than hold its own against its commercial red-canned cousin.  One group member wanted to make root beer but was discouraged when she read the list of ingredients, which included such rarities as sarsaparilla root and sassafras root.  Though these items might be purchased online, you’d likely have to buy a far larger quantity than you needed, and/or spend more than you’d like.  The same problem surfaced with rhubarb bitters (an ingredient in strawberry fields forever, a delicious-sounding cocktail), which seemed like a fun seasonal recipe– but it called for dried dandelion root, angelica root, and hyssop.  Unless you have an herb garden, or have dug up the dandelions in your yard, those ingredients would be difficult to find.   Two other dried herbs that proved oddly troublesome to locate were spearmint and peppermint, called for in happy belly tea.  These at least are embarrassingly easy to grow at home, if mint tea is a favorite of yours.

Other summery drinks we tried included the blueberry lemonade, which was a winner: it had plentiful blueberry flavor that played well with the tart lemon.  It would be a perfect drink for a summer party:  fruity, refreshing, and easy to make.  Watermelon agua fresca was also quick and simple to prepare; it was “delicious!” and not too sweet, containing only one tablespoon of honey per batch.

Horchata, an iced  Mexican drink made with homemade rice milk and cinnamon, was a bit on the sweet side but was quite refreshing nonetheless.  Though you had to plan ahead to make this (the rice steeps in water for four hours), there were only a few simple steps overall, and the result was something distinct and tasty.   We noted the absence in this book of that popular summertime New England drink, the raspberry lime rickey.  This fizzy concoction is a staple on local  summer restaurant menus, but it’s certainly easy to make yourself.  Perhaps author English, being from North Carolina, is not familiar with this treat?

This book, like most of English’s other titles, has a somewhat smaller format; but since most of the recipes are brief, almost all fit on one page.  The book did have some trouble staying open, as the binding is quite tight.  Even when opened to the middle pages, it would flop closed– a common, if minor, annoyance.  Numerous lush, evocative photographs paint a picture of a relaxed rural lifestyle; the photos were so gorgeous that they proved a bit intimidating for some–“my life sure doesn’t look like that!”  Agreed; but perhaps we can all dream a bit?   And if you’re looking for new ideas on how to attractively present/serve beverages, the photos provide lots of inspiration.

Overall, the main problem with this title (as has been true with a few books this year) is that while we might appreciate the concept of making it ourselves, in actual practice we don’t want to spend the extra time (real or perceived) that it takes.   For us this title kind of fell into the “hobby” category: though it won’t get dinner on the table, it’s fun to experiment with when we want to play in the kitchen.  This book would be a good choice for a gardener interested in herbs or fruit; for someone who’s really into beverages as a category; or for someone who enjoys the D-I-Y aspect.   Though most of us discovered at least one recipe we’d be happy to (occasionally) make again, our overall rating was a “3ish” out of a possible five.    So is it worth the time and trouble to do it yourself?  Our answer is a resounding “maybe….sometimes….sort of!” 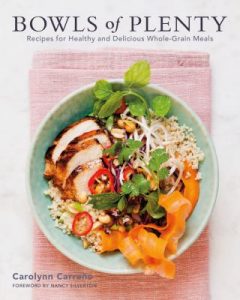 Our last meeting until September will be on Friday, June 29 at 11 AM in the McCarthy Meeting Room.  June’s title is Bowls of Plenty by Carolynn Carreno; copies are available at the main desk.  This meeting will feature a potluck lunch; bring an (optional) bowl or salad to share, either from the book or one of your tried-and-true favorites.   All are welcome, please join us!