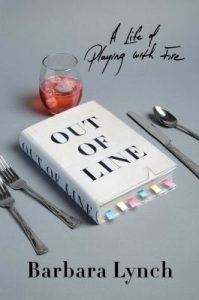 Recipe for a Boston chef: take one chaotic upbringing, add several crazy adrenaline-fueled teenage escapades, a pinch of caution, and a spoonful of insecurity. Stir in heaps of fierce determination and on-the-job learning.  Work all ingredients together 24/7 for about eight to ten years, then bake in a hot, hot oven until it all flames out, or…. it all comes together and you produce James Beard Award winner and local chef and entrepreneur Barbara Lynch.

There are lots of memoirs written by chefs and restaurant workers of all stripes, and our Bibliobites group has certainly gone down that path before. Our October title, Out of Line, fits within the genre, but unapologetically breaks the mold as well.  Ms. Lynch’s path to prominence in her chosen field is unique, and there was plenty to discuss, beginning with her early life in South Boston. Ms. Lynch grew up in Southie in an era when Southie was the  stereotypical clannish enclave with which many of us are familiar. As the second youngest of seven being raised by a single mom in a housing project, she had little supervision and used her freedom in many risky ways.  Some of her exploits were pretty shocking, like the time she and some friends briefly stole an MBTA bus.  Somehow, she managed to stay out of jail long enough to discover a passion for cooking in a high school home ec class.  We were all impressed by the teacher who mentored her and gave her life direction. Needless to say, Ms. Lynch’s path to prominence in her field wasn’t a traditional one.  As one person commented, “she became successful despite it all.” She learned to cook in restaurants by doing, and by taking on challenges that most wouldn’t dare to try; for instance, talking her way into a job on a dinner-cruise ship where she had to feed 150 people by herself.  It was hard for us to wrap our minds around the idea that she would do this with no training and minimal experience, and even more amazingly, pull it off.  We thought that maybe “she had innate ability,” and it was true that “she had a lot of help” from friends and mentors.  Still, her ability to learn fast and work incredibly hard were impressive.  Since she never went to culinary school, she learned by observation, by doing, and by reading books, which was also remarkable, “how did she learn all that from books??”  Hey, books rule!

In addition to being a highly regarded chef, Ms. Lynch is also a successful entrepreneur, with seven restaurants of various types, all located in downtown Boston. We admired her business acumen (again, learned on the job!), and the fact that “she treated her employees well.” For us suburban types, it’s worth noting that Ms. Lynch has bought a Gloucester landmark called The Rudder, which is set to open soon.

We admired Ms. Lynch’s overwhelming honesty about her life; her personality absolutely leaps off the page. “She’s very intense, like a lot of chefs.” “She is her own society…doesn’t care what others think.” “She had to act a certain way in order to survive and be safe.” A few in our group just plain didn’t like her, though they appreciated her accomplishments. Some disliked her writing; it was “too stream of consciousness” and “scattered.” The author admittedly has ADHD, so perhaps it’s not a surprise that sometimes she “jumped around” in her telling.  And, a few people conceded that memoir isn’t their favorite genre, anyway! 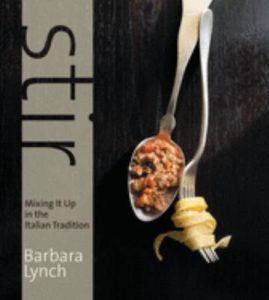 Ms. Lynch writes beautifully about food, and of course mentions numerous dishes she created in her restaurants, so we paired the memoir with her one cookbook, Stir.  This was published in 2009 and contains several of her signature recipes from her first restaurant, No. 9 Park.  Many of these recipes are fairly time-consuming projects (suitable for a rainy or snowy weekend!), but a few people took on the challenge.  The book itself is beautiful, with an extra-large format and art-level photography, all on heavy, glossy paper. Definitely a coffee table-worthy tome! In the kitchen, though, opinions varied. One person was unimpressed; there was “nothing new” and it was “fancied-up basics…no spices…she relies on technique and extremely high quality ingredients.” But, poulet au pain was at least “super easy,” while spinach amandine was “like a light creamed spinach….it was fine.” Roasted winter squash with maple syrup and sage cream was enhanced by the sage cream, a nice, and slightly different, treatment.  On the other hand, another cook who already “loves her (the author’s) food” enjoyed being able to make some of Ms. Lynch’s iconic dishes. Taleggio stuffed prosciutto-wrapped chicken (with fish fillets subbing for the chicken) was “so good” with its creamy cheese and tarragon accent. Lamb stew with sweet potatoes and barley was “the best…a keeper!”  This stew was “pretty easy” though expensive; it had several different spices, so there was “a lot going on!” Pork chops with caramelized apples, celery, and spiced walnuts were “delicious;” and “I felt chef-y….it was fun; simple, easy.” The quick celery salad atop the chops was a fresh, welcome twist. And speaking of salads, B&G coleslaw was a winner; the lemon and Dijon mustard-accented dressing, “…. is now my go-to for coleslaw!” Sounds like a keeper. 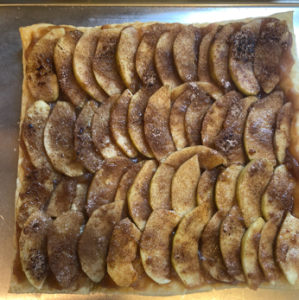 One person turned to the dessert section and made homemade apple butter tart, which we happily sampled at our meeting. This was yummy with lots of sweet and tart apple flavor from sliced apples and apple butter, but our cook mentioned that the recipe’s timing was off (it needed significantly more than called for), and the instruction to cover the tart in the oven with another baking sheet proved problematic; the top “wouldn’t cook!” And the kitchen torch, used to caramelize the apples, “made a mess.”  At least a mess is better than a fire!

One of our conclusions about Stir was that recipes, techniques, and ideas that were revelatory in 2009 are pedestrian today. For instance, the idea of using super-fresh, local ingredients is a given now in restaurants and at farm stands, but 13 years ago that wasn’t so common.  Some recipes that were new and exciting then (like the author’s signature gnocchi) can now be found in any decent mid-range restaurant. Still, there’s much that’s fun to peruse, and I personally plan to try out those gnocchi, as well as her iconic Bolognese sauce, sometime this winter when I need a diversion.

When we voted, the cookbook averaged out to a 2.5, and the memoir a 3.5 (out of a possible 5).  Both scores disguise the fact that most votes were strongly on one end or the other, so your results may vary!

We will next meet on Friday, December 9 at 11 AM in the Fireplace Room, please note that this is a combined November/December meeting.  We’ll be discussing Dorie Greenspan’s latest, Baking With Dorie. Copies are available at the main circulation desk or via curbside pickup.  Hope to see you there!