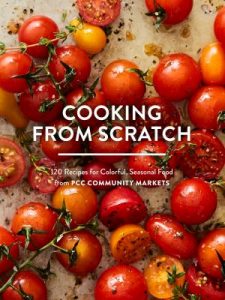 September brings that change of season with which we are all so happily familiar– cooler temps and shorter days, and the last glorious gasp of summer warmth.   And September means that our Bibliobites group restarts after a summer off.  We had envisioned  meeting outdoors on a lovely late-summer morning, but alas– the weather did not cooperate and we met on a rather drippy morning via zoom.   But despite the gray day, this month’s title seemed well-suited to this time of year when markets overflow with the bounty of summer and fall– tomatoes and apples; sweet corn and winter squashes; late peaches and the final round of green beans.  This month’s title, Cooking From Scratch, is published by the cooks at PCC Markets in Seattle, the oldest and largest food co-op in the nation.  This soup-to-nuts title surveys it all, with plenty of mealtime choices for both vegetarians and carnivores, as well as desserts, snacks,  and beverages.

One big plus of this book was its beautiful full-page photographs which showed off the finished dishes to their best advantage.  In some cookbooks the food winds up looking a bit artificial, but this title’s pictures made you want to pick up a fork and dive in!  The book is the standard large format; it’s a paperback printed on heavy matte paper.  There were no comments about the book staying open to one’s chosen page; my copy was newish and thus the binding was very tight and did not stay open.  However with time and use that problem would dissipate.  Many recipes fit on one page and the type was easy to read.

So, a good start– but once in the kitchen, how did things shake out?  Summer food was still in the driver’s seat for some of us; for instance: grilled corn salad with goat cheese was a delicious version of a classic combination.  The roasted corn was a nice way to change up an easily-made salad; “I would make it again in a heartbeat.”  Corn was also the main event in 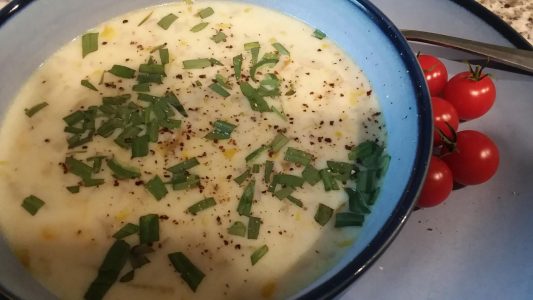 tarragon corn chowder.  The tarragon was “a nice twist” that we loved.  We noted that this recipe had what we considered to be the somewhat odd instruction to boil the potatoes with the milk-  perhaps this is a west coast convention?  In any event, those of us who made the soup ignored the directions and added the milk at the end, as all good New Englanders should!   Staying with summer, summertime fritters were a solid version of this now-common way to use prolific zucchini.  They were “straightforward” and “turned out well.”  The roasted cherry tomatoes featured on the book’s cover delivered on flavor; they were “super-easy” and very good.  And mango avocado fresh rolls looked pretty and tasted even better, with plenty of fresh fruity flavor and brightness from fresh basil and mint.

Moving into fall a bit, broccoli, lemon, and parmesan soup was “easy– delightful.”  It used ingredients you’d be likely to have on hand, and was thickened only with vegetables, nice for those who can’t or don’t do dairy.  Another fall favorite soup, butternut squash-apple  soup, was a keeper!  The coconut milk in it made the soup “velvety.”  An easy and super version of this classic.  Apple, bok choy, and carrot slaw was another “really good” and “colorful” salad that combined basic ingredients in a slightly different way.  Kale and quinoa salad also upped the flavor profile of its fairly standard ingredients with tahini.  Our cook misread the ingredient list and used tamari instead– and it was delicious that way, too! 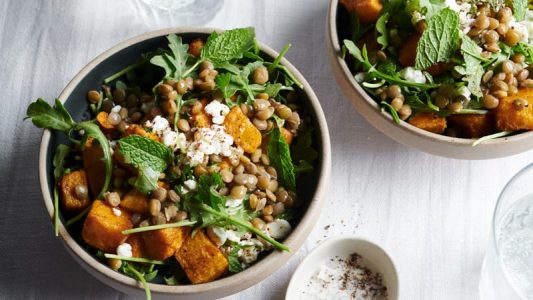 Spiced squash salad was “restaurant-worthy” with its caramelized squash atop tender arugula– simple yet sophisticated.

As always there were plenty of main dishes on our radar.  Three people made garlicky green beans and shrimp; all enjoyed this easy-to-make combination, though for one person it could have had more garlic.  A couple of people tried the tiger mountain turkey chili; it had good flavor though one person thought it was too spicy, while another thought it “needed more heat!”  Most of us already have a preferred chili recipe, and this one didn’t convert anyone.  Spicy pork and sweet potato stew was enjoyable, though it needed a bit more liquid; conversely, chilaquiles were “a bit soupy” though tasty!  Thai steak salad was another keeper with its garlicky, “just yummy” marinade and dressing.  It benefited from using a more tender cut of beef than the top round called for in the recipe.  A couple of chicken recipes also earned high marks: spicy chicken thighs had a delicious rub, though “you have to like curry.”

Pomegranate molasses grilled chicken was a terrific use for this newly-available ingredient.  It was “a winner– so moist and tangy.”

Seared scallops with arugula pesto was another restaurant-worthy, yet simple main dish; but linguine with asparagus and peas, though delicious, “needed something”– perhaps more salt?  Steph’s tofu had good flavor, but was downgraded because it was “too much work,” and “the sauce burned.”  If we lived near a PCC Market we could just go buy it there!  Lentil and white bean stew was a bit heavy on the black pepper, but this classic combination was still a good choice.  And curried lentil and mango wraps were a less-familiar, though delightful, combination.  Red lentils meant they were quick to make, too.

There aren’t lots of desserts in this book, but we did try a few.  Two people made flourless  chocolate crinkles,

which had a nice tender texture from almond flour and rich deep chocolate flavor.  However they didn’t flatten and crack on the tops the way they were supposed to.  Luckily they were tasty enough that this wasn’t really a problem!  Avocado brownies had an “odd fudgy texture” that just didn’t do it for our cook, though the chocolate flavor was excellent.  Two of us were intrigued by rosemary thyme crackers though neither tried them.  Had we met in person they would have undoubtedly appeared at our meeting, along with  those brownies!

While there was nothing earth-shattering or wildly innovative about this book, most of us found it very appealing.  The dressings and seasonings  in particular really hit the mark, and we liked the various simple twists on classic recipes.   Most recipes were uncomplicated, and many featured ingredients we were likely to have on hand.  And the ultimate compliment: at least three people planned to buy the book.  FYI, if your library’s copy of this book is checked out, and/or you don’t want to buy it, PCC’s website has most of the book’s recipes on its website, http://pccmarkets.com/healthy-eating/recipes.  Our overall rating reflected our enjoyment of this title; it garnered a 4.14 out of a possible 5.

We’ll next meet on Friday, October 29 at 11 AM; once again we’ll try for outdoors in person if the weather is good.  This month we’ll be cooking from Cookish by Christopher Kimball and the cooks at Milk Street.  The watchwords for this title might be “simple” and “flavorful”– give it a try and see what you think!  Copies are available at the main circulation desk or via curbside pickup.

**thanks to MM for the title of this post!