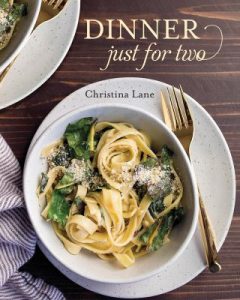 Table for two….tea for two….like two peas in a pod….it takes two to tango.  Coupledom is celebrated in our culture, but not so much in the kitchen.  Most recipes typically serve four or six, which can be problematic for a small household.  While it’s convenient to have tasty leftovers in your fridge, how many times do you really want to eat any particular dish?  The leftover problem is sometimes a consequence of the shopping problem– that is, packaging is frequently “family sized,” and buying in smaller quantity is either not an option or is more expensive.  Considering that, according to the 2010 US census, 28% of us live singly and 34% of us are couples (so over 60% of us live in small households!), it’s surprising how much the food/cooking world still focuses on larger quantities.  That seems to be shifting a bit, at least in cookbooks; and this month our Bibliobites group test drove three titles devoted to small batch cooking, all by blogger Christina Lane: Dinner Just For Two; Comfort and Joy: Small Batch Meals For Every Occasion; and Desserts For Two.  Have we embraced the smallish and ditched the leftovers?

Most in the group do live in one- or two-person households, so this topic is relevant; and since we’re all cooking at home almost all the time, we can always use some inspiration.  So, there was a lot of cooking going on!  Dinner Just For Two was the clear winner in this group; there weren’t too many complaints about any of the recipes we tried.  Among the hits were French lentils and kielbasa, baked Greek shrimp, chicken Parmesan meatballs (“I liked it a lot!”), corn, tomato, and dill summer salad, tandoori chicken (“one of the best…so moist and flavorful!”), and cheddar scallion waffles (“a nice, savory [versus sweet] option”).

This book features several recipes for bowls, which were also standouts: we enjoyed egg roll in a bowl (“love it…like the crunchy topper”), coconut curry noodle bowl (“very good!”), peanut lime noodle bowl (“I really liked the sauce”), chicken burrito bowl, roasted potato bowls with broccoli and gribiche (“the sauce puts it over the top!”), and 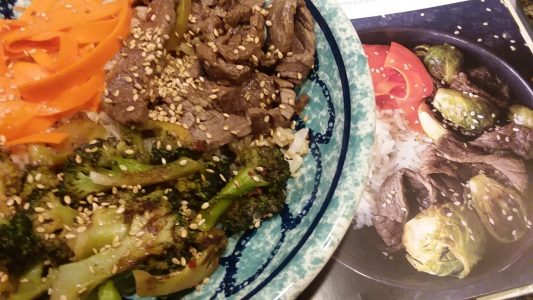 almost Korean beef bowls.  All the bowls were praised for solid flavors and ease of preparation.

Though the book unsurprisingly focuses on dinner, there is a dessert chapter, and some breads as well.  No-knead Dutch oven bread was super-easy and came out “just like the recipe said it would!”   On the other hand, foccacia was “very bland…it needed something more than just rosemary.”  Espresso chocolate-chip cookies were tasty though they could have used a bit more coffee flavor;  mini chocolate cake definitely had the cute factor, but was unexceptional otherwise.  But the raspberry brownies with Chambord glaze were excellent– chewy and chocolatey with a nice hit of raspberry. 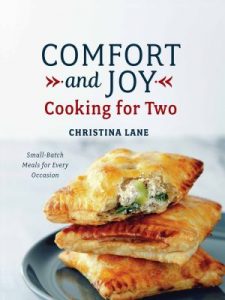 Several in the group had cooked out of Comfort and Joy; and the results from this title were decidedly uneven.  There were some hits: two people loved the green chile chili, which made two big bowls of this simple stew.  It was strongly flavored with cumin, which one person felt was way too much, but overall it was well-liked.  To go with your chili, you could try a small batch of corn muffins, which produced 6 tasty muffins.  Angel biscuits and gravy was a “good” version of this classic, as was the chicken parmesan for two, which was easy to make and featured a “really good” sauce (helped along by homegrown tomatoes!).  Two people enjoyed apricot-pecan chicken salad; this was a yummy combination,  but what really put it over the top was the “terrific” mustard-honey dressing.  A keeper!  From the breakfast chapter, one person made a “delicious” pumpkin spice latte.

The recipe called for 2 tablespoons of vanilla for two drinks, which seemed, if nothing else, quite expensive.  A possible typo?  Blueberry muffins were “so delicious– I shared the recipe with several friends,” and peanut butter swirl brownies were “really good, really easy….made two HUGE brownies.”  Sounds perfect!

So, that was the good news.  There were a number of problematic recipes in Comfort and Joy, among which were some “bland” and “flavorless” chicken ‘n dumplins; sweet and spicy Asian salmon that was “just OK” with “too much sesame oil;” and meatloaf that was also “OK” but had a “boring” glaze.  Charred corn tilapia was good enough, but the recipe was so simple that it was ultimately uninteresting; apple cider-glazed chicken breasts was a nice autumnal combination, but was one of a few recipes where the photo, which clearly shows cinnamon sticks, doesn’t match the recipe– where no cinnamon sticks are to be found.  Taco salad also had some recipe errors; you first cook your ground beef, set it aside– and then it is never mentioned again.  To add insult to injury, the entire dish lacked seasoning and looked “like something the cat would eat.”  In the dessert section, warm carrot cakes with cream cheese sauce literally fell flat (and were almost inedible), as the recipe contained no leavening of any kind.  The sauce was “delicious,” though!

Overall, we liked the author’s basic concept, since leftovers can be a mixed blessing.  It’s true that if you’re bothering to cook a meal, it doesn’t take much more effort to produce four servings rather than two, and then you’ve got an additional meal at the ready.  But sometimes you just want a “one and done,” or you live alone and even a recipe designed for two overstays its welcome.  Most of the recipes we tried were simple enough and quick enough that we didn’t mind the lack of leftovers, though most produced (by design) three good-sized servings.  The petite option was especially appreciated with desserts.  While a big cake and two people might initially sound like fun, it gets stale (!) pretty quickly.  So even if we don’t always want to cook sans leftovers, it’s nice to have that choice.

As for the individual titles, Dinner Just For Two was the favorite (a few planned to buy it), while the quality of Comfort and Joy seemed a few notches lower.  There were numerous typos and omissions, and many recipes lacked sufficient seasoning.  Oddly enough, no one used the Desserts For Two book, which was Ms. Lane’s original claim to fame via her blog.  We agreed that all the books had great production values– large format with heavy paper and easy-to-read typeface, and beautiful  and copious photos.  Our voting averaged out to a 4 (out of a possible 5) for the preferred Dinner book, and 3.2 for Comfort and Joy— so small is beautiful!

Our next meeting will be on October 30 at 11 AM.  We’ll be discussing one of Ina Garten’s more recent titles, Cook Like a Pro.   Copies are available at the main desk, or via curbside pickup.   We’ll chat via Zoom; if you’re not on our Bibliobites mailing list and would like to attend, please email group leader Andrea Grant.  See you then! 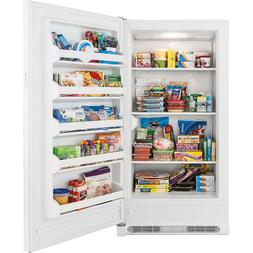 I asked the group for a favorite cooking- or shopping-for-two tip.  Most agreed that the freezer is one of their most important tools.  Obviously, you can freeze leftovers; but you can also use it to freeze small packages of meat and poultry that you’ve created from those large “family packs.”  It’s also helpful to know which recipes freeze well; you can make those in larger quantity, confident that they’ll be tasty months from now.  But, with all your little packages in the freezer, how do you keep track of what’s what?  First, label everything!  You think you’ll recognize something when you take it out three months from now, but trust me– you won’t!  A sharpie is your new best friend for avoiding unidentifiable containers.  Next, maintain a freezer inventory of some kind.

Some of us are into spreadsheets, some use plain old paper and pen, or (genius!) a whiteboard.  Whatever you choose, it’s key to keep it up to date, which is sometimes easier said than done.

Produce can be inventoried as well; try putting a sticky note on the produce bin so you can quickly see what’s lurking in there.  To prolong the life of produce, certain items will keep better if washed and prepped, like lettuce (wash, spin dry, store in a plastic bag or box with a slightly damp paper towel) and fresh herbs (ditto).  Some veggies can be cut up and stored for several days without ill effect, like broccoli, cauliflower, or carrots.

If you’re thinking small with your food, you might as well with your equipment, too.  There are mini versions available for stand mixers, food processors, and even multicookers (Instant Pots).  It often works better to cook with smaller skillets and saucepans, too.  For casseroles and certain desserts, try small au gratin dishes and ramekins.  They look appealing, too!

If you are interested in small-batch cooking, check out some of these additional titles: