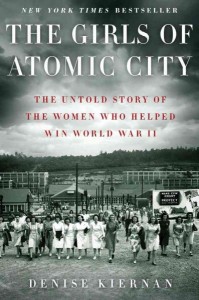 At a recent meeting of the Monday Night Book Group, members discussed The Girls of Atomic City : The Untold Story of the Women Who Helped Win World War II by Denise Kiernan.

Kiernan takes a new look at the history of Oak Ridge, Tenn., a city conceived and built as part of the atomic bomb program. This hidden city had a population of 75,000 and covered 80,000 acres of mountain woodland. It was built as part of the Manhattan Project during World War II. Oak Ridge was the site of tremendous factories, where workers separated uranium isotopes in preparation for the creation of the atomic bomb. Kiernan collected oral histories from town residents and from ten women who held various jobs in Oak Ridge – cleaning floors, operating machines, taking dictation and performing engineering experiments.

The folks who worked in this secret city were kept in the dark about what they were working on. They were forbidden to discuss their work with anyone,including each other.  It was not till the first atomic bomb was released that residents became aware of the magnitude of the scientific event that they had been part of. The book moves back and forth between the stories of the women workers and development of atomic fusion and shares with us the discrimination, racial segregation and sexism that the women endured during this project.

Book group members generally liked this book and enjoyed the glimpse into a little-known piece of history. Some thought the back and forth narratives were confusing and made the reading choppy – although the typeface changes in the text did help to identify the switches in narrative.

The scientific information interspersed with the stories of the women was the most appealing part of the book to some and an excuse to skip ahead for others. The book reminded one reader of The Immortal life of Henrietta Lacks by Rebecca Skloot but she felt it lacked the emotional depth and the scientific details that she enjoyed so much in Skloot’s narrative.  Others felt that there were too many featured women; the story would have been easier to relate to if the author had focused on just one or two women.

However, the author did a good job at making you feel that you were there. The horrific living conditions, houses slapped up in a day, women bunking together in small spaces and the endless mud were described well.  As most of the residents of Oak ridge were young people, the details about their dating rituals, the dances they attended and the ways they sought entertainment  were fun to read. Readers also appreciated the social history Kiernan shared – the disparity in treatment between the black and the white populations, inequality between the men and the women.

One side story that caught the attention of many readers was the tale of an African American man, Ebb Cade, who was in a car accident that broke both of his legs. Once in the hospital, he was held without setting his fractures while the scientists used him as a human guinea pig, injecting him with low doses of plutonium to study the effect. Researchers collected urine, feces, and tissue samples, and removed 15 of his teeth. He died eight years later, reportedly from heart failure.

We also discussed the high level of patriotism in the country at the time. Folks did not ask a lot of questions, they were just glad to do something for their country and as it was post-depression era, they were also just grateful to get a job.

Readers felt that this was just a slice of history shared with us without editorial comment. There was no looking back, no perspective on what it was like for the residents of Oak Ridge later in their life to understand what devastation and loss of life the bombs caused. The nation was at war, there was no question that Oak Ridge and all of its residents were there to help. While it was difficult for so many to give up their family lands and houses, as when the Quabbin Reservoir was flooded, the greater good was paramount. The fact that the women in this book trusted the government, worked diligently without question and kept the secret they were entrusted with was a given. Compared to the distrust and persistent questions of the current American people, this not too distant past was in some ways a simpler time. We discussed the unity that can come from all facing the same enemy and how patriotism soared during 9/11. And we talked about how when the bomb dropped, all the scientists involved retreated to their respective places of worship.

Other books (in the order they were mentioned)noted during our discussion included:

Bridge of Spies: A True Story of the Cold War by Giles Whittell

Devil in the White City: Murder, Magic and Madness at the Fair that Changed America by Erik Larson

The Astronaut Wives Club: A True Story by Lily Koppel

The Wives of Los Alamos: a novel by TaraShea Nesbit

The Right Stuff by Tom Wolfe

Fast into the Night: A Woman, Her Dogs, and their Journey North on the Iditarod Trail by Debbie Clarke Moderow

The Columbus Affair by Steve Berry

The Prince of Tides, The Great Santini, South of Broad, and The Death of Santini by Pat Conroy

My Name is Lucy Barton by Elizabeth Strout

Also mentioned – (Put this on your bucket list) was the SPAM! Museum in Minnesota

Our next evening book group will be April 4, 2016 at 7 PM and we will be discussing Hallie Ephron’s psychological suspense novel  – There Was an Old Woman, – as part of our One Book Chelmsford community-wide reading program.