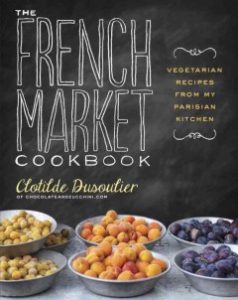 French cooking has (despite Julia Child’s efforts) a reputation for being complicated, fussy, and maybe a bit pretentious.  It’s a cuisine famed for its reliance on butter, cream, and rich sauces.  Traditionally it’s a meat-centric cuisine as well, with vegetables being little more than an afterthought.  Well-known food blogger Clotilde Dusoulier, author of the January Bibliobites selection, aims to show us that modern French cooking is also vegetarian and straightforward.  With the excesses of the holidays behind us, this book would seem to be the perfect way to welcome in a new year of healthier eating based on grains, legumes, and seasonal produce.  As always, the group had strong opinions about their experience at the French Market.

……And those opinions were strongly negative!  There wasn’t a person at the meeting who enjoyed the book, with most actively disliking it.  More than a few people wound up making none of the recipes.  The most common complaints were that “nothing called to me,” and that the author frequently used ingredients that are difficult to find in the U.S. (the author is French but has lived in the U.S. and the book is written for an American audience).   Par example, she uses spelt berries, rolled barley, lemon verbena leaves, chestnut flour, and celery root, all of which are not readily available.  Another common criticism was that the recipes are on the bland side and/or have odd (or should we say unusual?) spicing.  For instance, the only flavor in the otherwise very neutral lentil croquettes was a teaspoon of coriander, which was overpowering, with nothing else to balance it out.

Other recipes that we tried included the cauliflower gratin with turmeric and hazelnuts, which was good but used enough turmeric to make the sauce “neon”!  The couscous with vegetables was ordinary, with a few people commenting that they already had similar, and better, recipes for this dish.  The softly spiced carrot and almond soup tasted very strongly of cardamom and anise but still seemed like it was missing something; and the butternut and celery root soup was “OK but not outstanding– and I have other squash soup recipes that I like better.”  The blanch-roasted new potatoes were a two-step process, as the name implies, but the difference in taste or texture was negligible, and therefore not worth the extra effort. The mushroom and chive quiche was heavy on the mushrooms, which made it unexpectedly expensive; it tasted good but didn’t have that smooth custardy texture we were looking for.  The above- mentioned lentil croquettes also lost points for being a bit tricky to assemble; the lentils had little to bind them and tended to fall apart.  The tahini sauce that accompanied them was delicious, though.

Some of the more successful recipes (in our opinion) included savory pumpkin and cornmeal quick bread,  leeks vinaigrette, and endive, orange, and walnut salad.  The green bean, red rice, and almond salad, was “good– but I used brown rice because I had it;” the goat cheese and rosemary sables were tasty but the texture was unexpectedly soft– “I wish they were crunchier, more like crackers.”  The Corsican turnovers with winter squash were “good but not great,” though they scored points for cuteness and portability.

The book itself, also came in for some critical comments: the format was too small for most people, and there weren’t enough photos.  Some of the recipes had unnecessary steps, or it was unclear why those steps were needed.  But of course these complaints would have disappeared had everyone enjoyed the food!  So, nous sommes désolés (we’re sorry) Clotilde– as far as we’re concerned your book just doesn’t make the grade; our vote yielded an average of 1.625 chef’s hats (out of a possible 5).  Mon Dieu! 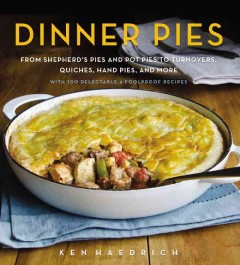 Join us when we meet again on Friday, February 24 at 11 AM in the Fireplace Room.  This month’s title is Dinner Pies by Ken Haedrich.  You still have a week to try out recipes! Copies are available at the main desk.