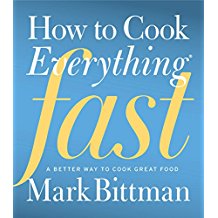 Especially on a weeknight, the appeal of “fast” is undeniable.  We all would like a fresh, home-cooked meal at the end of a long day; but we often don’t have the time for the kinds of prep a from-scratch dish requires.  Author Mark Bittman promises to show us how to cook so efficiently that we can have dinner on the table in 30 minutes, without using any prepared or shortcut ingredients.  And he claims his food will taste as good, or better, than more traditional versions that require much more time to execute.   Can Bittman (master of several Everything books) deliver on this bold promise?

Problem number one: this book is a tome!  Not counting the indexes, it’s just over 1000 pages.  It’s a big heavy book that can be a bit of a chore to lug around; though considering its thickness it’s lighter than it could have been.  It’s sized so that its pages do stay open on the counter (unless you’re at the very beginning or end)– always appreciated.

But unlike many other recent (2014) cookbooks, this one features no photographs!  The beginning chapters, which provide information on cooking efficiently, do have plenty of line drawings to illustrate various techniques, a style reminiscent of The Joy of Cooking from the ’70s.  That’s not necessarily a criticism; this book just has a very different style from the lavishly photographed titles that have become the norm over the past ten years.  The font and layout of the pages made it easy to read the recipes.  We liked that Bittman repeated the quantity when telling you to add an ingredient, which eliminated a lot of glancing back-and-forth for the reader.  He also  has prep steps printed in blue, and cooking instructions in black; some liked this feature, others found it distracting.  At the end of each recipe, Bittman lists several variations on the initial recipe; this was very helpful as you could adjust based on ingredients you might have on hand.

The first 40 pages of the book are called “How to Cook,” and provide lots of information on how to efficiently slice, dice, chop, and more.  He also lists pantry ingredients to have on hand, ideas on how to set up your kitchen workspace, and general strategies for speeding up your meal preparation.  All of us learned a thing or two, and also realized that many of the ideas listed we had arrived at ourselves through trial and error.  So we felt this book might be especially useful for someone without a lot of kitchen experience.

Problem number two: most of us apparently are way too slow!  Bittman often tells you to chop something while your oil or butter is heating in the pan; but rarely could we complete the task before the pan got a bit too hot.  This seemed to happen with other steps as well, where the prep step in the middle of a cooking step took longer than predicted.  Obviously you can turn down the heat or set something aside until your prep is done, but this sort of precision timing made for a more stressful experience in the kitchen.  Some of us ignored the order of prep and just did certain steps well ahead of time, which certainly works if you have that time available, but sort of defeats the purpose of the book’s philosophy!  However, as Bittman himself might point out, the best way to do something is the way that works for you.  And when we got right down to it, most of the time claims were pretty on target; recipes that were supposed to take 30 minutes generally were in the 30-40 minute range.  A few came in under 30 minutes!  Forty-five minute recipes were often quite close to that.

But what really counts in any cookbook is the food itself; and though most of the recipes were quick as claimed, were they tasty as well?  Read on…..the sesame chicken with snow peas was good, but not great; it did take the 30 minutes predicted.  The eggplant Parm sub likewise wasn’t overly impressive, but the idea of it was solid and with some future tweaking it might be a keeper.  Similarly, the pasta with spicy eggplant and tomato sauce was OK but not inspiring.  The caramel-cooked cod was super-salty; the dish was dominated by fish sauce and lacked the balance between sweet and salty that’s the hallmark of this classic recipe.  Chicken and spinach meatloaf was on the bland side and unfortunately didn’t reheat that well, and the scallion pancakes needed a bit more salt.  But they were very fast!  The stir-fry noodles with beef and celery were also very quick, but “boring.”  Fennel salad was good and pleasantly simple, but “I still like Ina Garten’s recipe better!”  The spaghetti and drop meatballs were tasty, but the timing was a bit tricky– by the time you dropped the final meatballs into the sauce, the first ones were already done, so it was hard to cook everything evenly.  And it didn’t seem like dropping the meatballs vs. rolling them saved that much time.  Cold peanut noodles were “OK,” but fast, and “I would make them again.”  The Moroccan-spiced chicken cutlets could’ve used more sauce, but the touch of cinnamon was different and enjoyable.

Other chicken recipes that we tried and liked were the chicken with creamed spinach (“really moist”), chicken and cauliflower curry with apricots (the variation with tomatoes instead of apricots), honey-ginger-soy roasted chicken and celery (“very good flavor”), and the mushroom and chicken stew with dill and paprika (“easy and flavorful– love the dill!”).  We tried a few fish dishes as well; the blackened catfish with green beans (the Dijon mustard variation) was quick, though the green beans really needed more time.  The recipe seemed to have “too much” butter;  the sole with glazed carrots also used a fair amount of butter, but it was delicious as written, and was a nice one-pan meal.

We appreciated that Bittman keeps his suggestions for sides super-simple; often just warm bread, plain rice, or noodles.  Most recipes incorporate plenty of vegetables, which we liked, and his vegetarian section is clearly not an afterthought.  His recipes use almost all fresh ingredients (with a few exceptions, like canned tomatoes), which is admirable but could get a bit carried away for our tastes.  For instance, he called for an orange when what was needed was orange juice, and only 3 tablespoons at that.  It’s hard to believe the fresh-squeezed juice would make a noticeable difference.  Similarly he normally calls for fresh spinach (with all the washing and trimming that entails) when sometimes frozen would have done just fine.  But this is every cook’s own decision!  Some thought the recipes sacrificed too much flavor in the pursuit of quickness; others noted an over- reliance on red pepper flakes to boost flavor.    And the bakers among us were disappointed that the dessert chapter was very short and didn’t feature many baked goods, many of which would be over the 45 minute time limit.  Guess you just can’t have it all!

Many of us already have our go-to recipes when we want a speedy meal, but this book did give us some good ideas, and some new ways to think about our cooking process.  Most people rated this book 4 chef’s hats (out of a possible 5), but there were enough unimpressed cooks that the overall average was 3.25.  There’s no grade inflation with this group, though, so 3.25 is a pretty good mark! 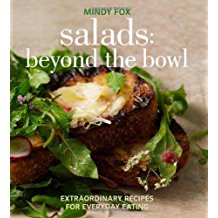 Our last meeting until September will be on Friday, June 30 at 11 AM in the McCarthy room.  We have 2 titles this month: Salads: Beyond the Bowl by Mindy Fox; or Salad Samurai by Terry Hope Romero.  This meeting will feature a potluck lunch; bring an (optional) salad to share, either from the books or one of your tried-and-true favorites.   All are welcome, please join us! 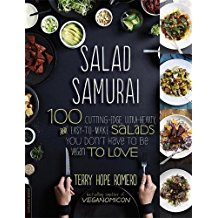